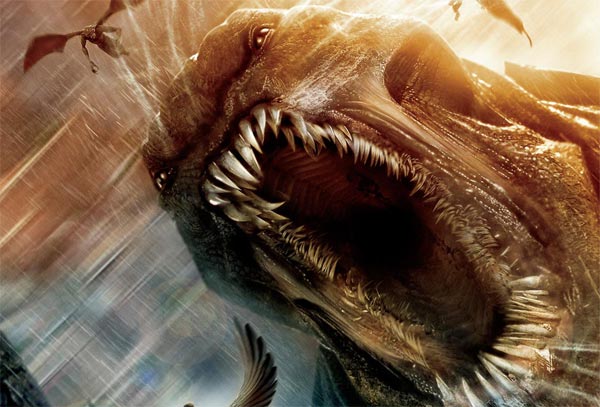 I mentioned once before that in many movies, the best way to tell the heroes from the villains is to look at their offices. Impossibly neat and tidy office = villain. Terribly messy and disorganized office = hero. Well, no one has any offices here, but this time you can tell a lot by the tails. Anything with a tail (prehensile, not one that just hangs there) is trying to kill people.

I mentioned once before that in many movies, the best way to tell the heroes from the villains is to look at their offices. Impossibly neat and tidy office = villain. Terribly messy and disorganized office = hero. Well, no one has any offices here, but this time you can tell a lot by the tails. Anything with a tail (prehensile, not one that just hangs there) is trying to kill people. Anything without might not be friendly, exactly, but at least isn’t a mindless killing machine that won’t even listen to your pleas for mercy. Well, except maybe for Acrisius (Jason Flemyng, one of the nasty brothers from Stardust), but I’m getting ahead of myself there.

Sam Worthington (yes, from Avatar, blah, blah, though he really is a good actor) plays Perseus, a foundling who’s pulled from the ocean and raised by Pete Postlethwaite and Elizabeth McGovern to go into the family business, fishing. (Let me add at this point that if you know the myth of Perseus, forget all of it before you go into the theatre. Also, if you’ve seen the original Clash of the Titans, forget that, too, because this is completely different. If my vague memories of seeing the original on TV when I was a kid are accurate, the scene with the heroes surrounded by giant scorpions is at least mostly the same, but that’s about it. Note that giant scorpions also have giant, pointy tails.)

Where was I? Oh, yes, fishing. Fishing is very bad, and getting worse. Like good ancient peoples, everyone blames the gods for this misfortune. The gods blame the humans for not loving and worshipping them enough. You can see the vicious cycle there, because who wants to think nice thoughts about a deity who seems to be trying to starve you and your family to death? But Spyros, Perseus’ foster dad, believes that the boy was saved from the seas for a reason, and perhaps someday, he’ll be the one who stands up and says “Enough!” Perseus seems to be thinking, “Yeah, sure, dad, whatever you say,” but he’s bothered by the mystery of his past.

Then all Hades breaks loose. In punishing a group of soldiers rebelling against Zeus (Liam Neeson, who’s often an angry father), the aforementioned deity (played by Ralph Fiennes, aka Lord Voldemort) clumsily — or maybe spitefully — manages to kill Perseus’ family into the bargain. After that, it’s no more Mr. Nice Fisherman. The few surviving rebellious soldiers fish him out of the water and take him to their city, Argos, which of course now has a giant target painted on it. There, they figure out that Perseus must be a demigod, since he survives another smackdown from Hades, but Perseus doesn’t particularly like this revelation about his heritage and spends much of the rest of the movie pretending he’s a regular guy who just happens to be able to survive giant scorpions, the Medusa, and other tailed beasties when all the ordinary mortals around him are dying left and right.

Also helping on the quest he suddenly finds himself on is Io (Gemma Arterton, Ms. Fields, and soon to be Tamina in Prince of Persia, Sands of Time). Again, she’s nothing like the original character from Greek myth, but she did have her life messed with by them, so she can empathize with Perseus’ plight. She seems to do demigod sort of things, though she isn’t one, and also has the extra handy ability of managing to look cleaner and tidier than everyone else, even when being stabbed.

This is kind of like reviewing a Harry Potter movie — half the British actors in the world are in it, and there are so many characters it’s hard to mention them all. I haven’t even gotten to the soldiers who help Perseus, or the djinn, or Acrisius. No, I don’t know what djinni are doing in a Greek myth, either. They remind me of the Mummy, though.

In a lot of ways, the whole film is completely over the top, just as a myth should be. Everyone’s larger than life (especially the Kraken) and every time you turn around, there’s someone spouting prophecies, contemplating human sacrifice, announcing their intention to spit in the eyes of the gods, or something equally foolhardy. Sometimes when you turn around, there’s actually a god there, in the divine flesh. It isn’t all quite epic, though — sometimes it’s just about a young man grieving for his family, and that might be the part I remember best.

I’ll go with three and three-quarter idols out of five. It’s just a fun movie, and it seems like they had fun making it, which I think is an underrated thing. If the people who make it don’t enjoy it, how can they expect us to? It also wasn’t nearly as gory as I was expecting, so that was a nice surprise. Ralph Fiennes totally chews up the scenery, Zeus looks just as tempestuous as he should, and you get the lovely Io in a short skirt, and the handsome Perseus in an even shorter skirt. There’s even aerial combat. What more could you ask for?