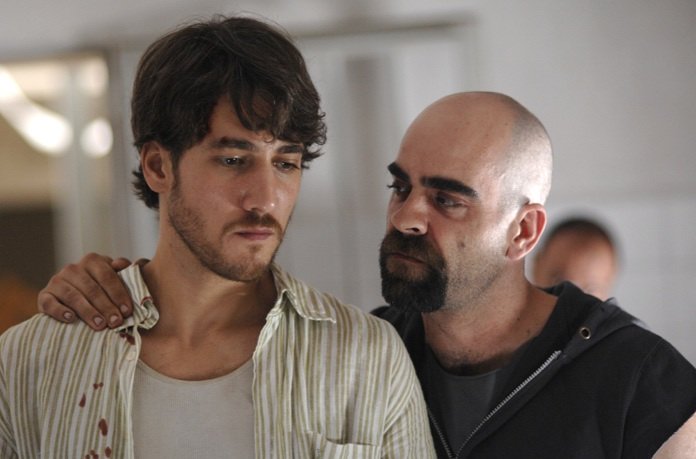 Alberto Ammann plays Juan Oliver, the newest employee of said prison. He’s there the day before his job officially starts, taking a tour of the place and learning a little about his duties. He doesn’t actually have to be there; he’s trying to impress them with his enthusiasm, since he has a wife, Elena, and a baby on the way, so he wants a good, steady job. I’m not sure how good such a job is, but it probably pays pretty well, and since he worked at a sewage treatment plant before, it’s probably cleaner overall and a lot less smelly.

The prison is old, however, and it isn’t uncommon for bits of the ceiling to fall in. Seriously. They have netting strung up to catch the worst of it. I don’t know anything about building codes in Spain, but I can’t believe this building would pass an inspection. The inspectors are probably afraid to go inside, though.

But during Juan’s visit, a particularly large piece falls, breaking through the net, and conks the poor man on the head. Stunned and bleeding, he’s barely conscious as the guards showing him around move him into a cell — specifically, the recently empty cell 211, whose previous occupant found a way to commit suicide. Why don’t they bring him to the infirmary? Well, the infirmary’s all the way over in another wing of the prison, and the cell’s right there; but “I don’t know,” is the best answer anyone can come up with later.

At that worst possible moment as far as Juan’s concerned, a riot breaks out. Led by a man known only as Malamadre (Luis Tosar, who was in the 2006 Miami Vice flick and dozens of other Spanish films). Now, Babelfish refuses to translate it, and most of the Spanish I know came from Sesame Street, but I’m guessing that equates to something like Bad Mother in English, implying a very rude word that might come next. Someone else online translates it as Bad Ass, which used to be a rude word, but now is apparently perfectly all right.

Anyway, Malamadre is the alpha male in this place, and he’s controlling the rioters (okay, mostly controlling them) as they run through breaking everything. Juan wakes up, realizes what’s going on, and, not unsurprisingly, panics. He can think of only one chance to live through this, and he takes it: he pretends to be a prisoner.

They don’t have uniforms here, though no one is allowed belts or shoelaces, both of which Juan quickly disposes of. After that, thanks partly to the blood on his shirt from his head wound, he almost fits right in, except he doesn’t look mean enough, something that Malamadre and his lieutenants are quick to sense. I don’t imagine Malamadre ever read any Sun-Tzu, but he instinctively knows the value of keeping one’s enemies close, or at least potential enemies, so he makes Juan his new best friend.

Elena (Marta Etura) is worried, though. In spite of fighting to keep things quiet, word of the riot is spreading, and she wants to know that Juan’s all right. She doesn’t believe all the careful attempts to soothe her, and joins the relatives of the other guards and prisoners out at the scene, banging on the gates and pleading for answers, while the rioters inside watch it all on their TV in the wreckage of the prison. Across the country, other inmates follow their example and riot as well, while tensions rise between Spain and Basque officials over three Basque terrorists, prisoners who are now also hostages of the original group of rioters.

It’s a very violent and over the top movie, unsurprisingly; but it’s also very subtle. Slowly, Juan’s allegiances falter as things get worse both in and out of the prison, and while he moves closer to Malamadre’s bloody world in keeping up his disguise, Malamadre almost seems to become more like Juan, developing a strong loyalty to the man he’s meant to be watching for signs of betrayal. Malamadre even shows a rough sort of real compassion when terrible news from outside reaches the inmates. By the end, there isn’t really anyone you could call a hero left, and you wouldn’t know who to root for even if there was.

Four and a quarter idols for this one. It isn’t terribly realistic in a lot of ways — there are several highly convenient conincidences — but it’s solid enough otherwise that you can get caught up in it and really start to feel something of the situation the prisoners end up in, a situation that you know won’t have any winners when the dust settles.

On a lighter note, I also have a fun MCND trivia item: in real life, the actress who plays Elena is actually involved with the actor who plays Malamadre. I love these little factoids.