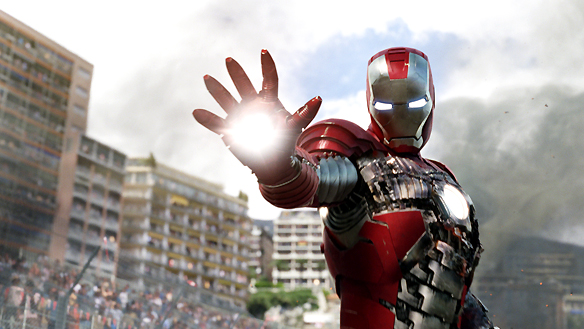 In this case, an awful lot of cars get destroyed by repulsor rays and I think maybe lasers or some other form of raygun as well. Because the thing about Iron Man (or more precisely, Tony Stark) is that he starts out expensive and outrageous. He’s a billionaire playboy who can build miniature arc reactors in a cave with a box of scraps. Outrageous is the least we can expect, even from the first movie in the series. So we’ve got the perfect person to play Tony Stark, and the perfect excuse to make the sequels more and more over the top. It’s the series that never ends! Robert Downey Jr. will never be out of work again, as long as he doesn’t mind playing Tony Stark forever and ever.

Pretty much everyone is back from the first film, except Terrence Howard, who played Tony’s best friend Rhodey but has now turned into Don Cheadle; and the characters who died in the first film. I almost said “of course”, but that sort of thing doesn’t apply, especially in superhero movies. But the continuity is nice, and Don Cheadle just slides right in like he was always there.

New to this film are Sam Rockwell as Justin Hammer, CEO of the big rival to Stark Industries, Hammer Industries, except they call it Hammer Integrated Systems here; Mickey Rourke as Ivan Vanko, who’s known as Backlash or Whiplash in the comics but doesn’t get a funky code name here; and Scarlett Johansson as Natalie Rushman a.k.a. Natasha Romanoff, who’s really the Black Widow but never gets called that in the movie. They’re really avoiding the code names for some reason. And Nick Fury (Samuel L. Jackson) has a lot more lines this time around, and even Agent Coulson (Clark Gregg) is back, still with the best job ever. Everywhere he goes he finds a super hero. How cool is that?

I guess the other thing about sequels is that it takes me forever to get to the plot. Ivan (as you know if you’ve seen the previews, and who hasn’t?) is a violent man with a grudge against Tony. More accurately, he has a grudge against Howard Stark, Tony’s father, but a grudge against a dead man isn’t much fun, so Tony’s the target. Probably lots of people have grudges against Howard — when you build a multi-national, multi-billion dollar corporation, odds are you’re not making many friends — but unfortunately for our spoiled, narcissistic hero, Ivan is also a physicist. (“Physicist”, in the Marvel universe, is code for “MacGyver“.) So Ivan creates those cool electrified whips that you see him use on the racetrack to slice Tony’s car in half, and goes hunting.

Tony has other problems, of course, because even having billions doesn’t make everything easy… well, okay, it probably does, but for the sake of the movie we need problems. Something’s not quite right with his miracle arc reactor. He doesn’t want to run his own company anymore (I always wondered who did the work when I was a kid, since he seemed to spend two-thirds of his life in the armor and never went to board meetings) and Pepper (Gwyneth Paltrow) can’t do everything herself. Pepper is also really annoyed at him, on all sorts of levels, and I can’t say as I blame her. The government, led by Senator Stern (Garry Shandling), wants his armor. The new drop-dead gorgeous woman from the legal department just might be able to beat him up in the boxing ring. Oh, and Justin Hammer, who isn’t really a physicist and therefore can’t compete, has decided that the thing to do is kill Tony so Hammer’s corporation can corner the market.

Throw in a lot of really big guns, an extra set of Iron Man armor, the giant Stark Expo in New York, the Monaco Grand Prix, a bunch of really nasty drones, a cockatoo, and lots of things that go boom, and you have it — a sequel as only Iron Man can do it. And also unusually for a sequel, it gets four idols out of five. There’s enough action to keep you interested, but not enough to overwhelm, and people applauded one of the big fight scenes. How often does that happen nowadays? There’s plenty of fun snark and sarcasm between Tony and Pepper; Sam Rockwell, as always, manages to be both a classic geek and slightly scary at the same time; and of course pretty girls in skimpy outfits. And the fun cameos are not neglected, though I have to admit I didn’t recognize a lot of them. But I can always spot Stan Lee!

P.S. Whatever else you do, do not, repeat NOT, leave the theatre before the credits are over. I thought everyone would have learned from the teaser at the end of the first movie, but apparently not — we lost a good half of the audience, who will now have to buy another ticket or wait for the DVD to find out what the next hero in line is going to be. So be sure to stay until you see what’s in the giant crater, and then gloat to your more impatient friends who left too soon.