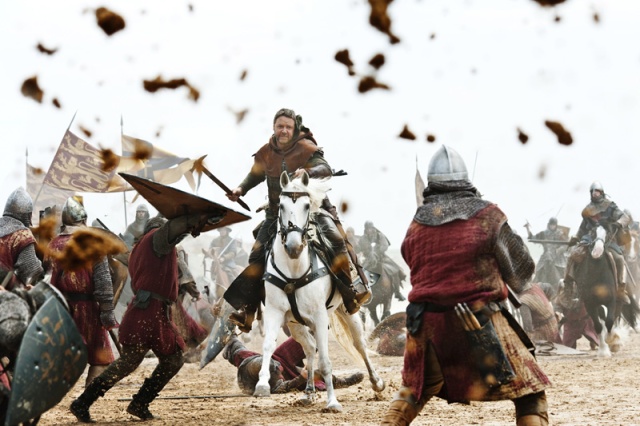 I’m almost afraid to say anything because Russell Crowe doesn’t take criticism well; but on the other hand, the script wasn’t his fault, and it isn’t as if he’s ever going to read this. And I’m not saying anything bad about his accent, anyway. That seemed fine to me. The stuff is all good, too, I think. I’m no expert in the daily life of the times, but no one had anything they obviously shouldn’t, like forks or a full set of plate mail armor. Well, the Loxleys had a pitcher made of actual glass, which they shouldn’t have had, since they were supposed to be poor and such things would have cost a fortune back then. And I don’t think the music was right, either, but it never is for movies set in medieval times; so overall it was good as far as that went.

Part of the problem with turning an outlaw into a hero is that outlaws really don’t make good heroes. They’re usually mean, inconsiderate, and actually deserve to be outlaws. The real Robin of Locksley, for instance, was an outlaw probably because he ran into debt and/or killed his stepfather, but you’ll never find either of those in any Robin Hood adaptation.

This time around, he’s Robin Longstride (Russell Crowe), an archer from the army of the Third Crusade, led by Richard the Lionheart (Danny Huston, aka Poseidon). The Third Crusade was awful, even by Crusade standards, so when Robin gets half a chance, he isn’t too unhappy about cutting his losses and heading home on his own. The English are besieging a French castle, which, after all, isn’t exactly the point of a Crusade; and when the king ends up dead, it’s every man for himself.

Robin has some friends, though, namely Little John (Kevin Durand, Gabriel of Legion), Will Scarlet (Scott Grimes), and the winner of the Real Name Closest to the Character’s Name Award, Alan Doyle as Allan A’Dayle. While they’re making tracks, they run across an ambush led by Godfrey (Sherlock Holmes villain Mark Strong) that’s meant to kill the already dead King Richard. Oops. According to the Wiki article on this flick, Godfrey is actually based on Guy of Gisborne, a henchman of the historical Sheriff of Nottingham once sent to kill Robin, which works. Otherwise I’m not sure who the heck he’s supposed to be.

The ambush is where Robin meets Sir Robert Loxley, though briefly, since Sir Robert is dying. He still has his father’s sword, which he took without permission ten years ago when he headed out on this ill-fated crusade, and wants to return it. Robin promises to do this, and if you think you can see where this is going, you’re right. Soon Robin finds elderly, blind Sir Walter Loxley (Max von Sydow, aka Dr. Naehring), the newly widowed Lady Marion (Cate Blanchett), Friar Tuck (Mark Addy of Red Riding 1983), and a village slowly dying under the heavy taxations of Richard and John. Actually, now that I think about it, no one really seemed that bad off, but Lady Marion insists that they are, so I’ll take her word for it. And during that time England really was in very bad economic shape, and outlaws of one kind or another were probably pretty thick on the ground.

It’s shortly after Robin finds the Loxleys that things turn particularly historically inaccurate. The stuff with King John (Oscar Isaac) and his wives is mostly wrong, and many of the actual problems of John’s accession to the throne are completely skipped over, though there were so many, skipping some doesn’t matter a whole lot. One thing that Robin Hood adaptations always get right is the fact that nobody really liked John, not even his mother. This movie probably also gets his personality right — he was spoiled, self-centered, and when expedient, would break his word faster than you could say, “But you promised!” He is brave, though, in a really stupid sort of way.

Anyway, everyone can read. Archers, who would never have learned anything of true knightly combat, being commoners, know how to swing swords. And a stonemason writes the Magna Carta (or Charter of Liberties, as it was first known). Whatever you call it, it wasn’t written by stonemasons. I have to admit, though, one particular inaccuracy leads to a good dramatic scene. It’s a little like the opening of Saving Private Ryan, only with bullets instead of arrows and a lot less blood and gore. A lot.

So the acting is top-notch. The plot is solid. The history is — well, more right than usual, though that isn’t saying a lot. And yet somehow, I can’t make up my mind how much I liked it. I never can make up my mind on a number until I get to this point, but this time is worse than usual. Let’s try three and a half idols. Yes, that sounds right. The history buff in me cringed more than once, but I was expecting that, and overall it was a fun watch. It isn’t quite summer movie season yet, but it has some of that feel about it; a solid action movie with a little romance, a good dose of the grittier side of medieval life, and lots of fighting. Now I need to go get myself a longbow.