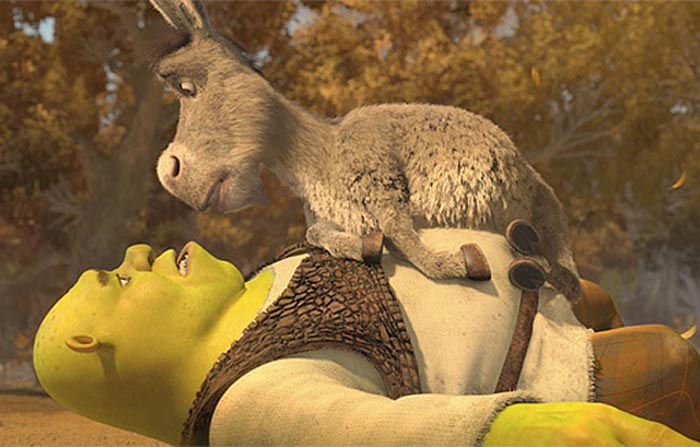 I didn’t see the third Shrek movie, but apparently I didn’t miss anything. The only shocker is that someone agreed to make a fourth film in the series after that dismal mess. But according to the latest trend, they cleverly avoided calling it a fourth film, since that’s Hollywood’s way of trying to fool viewers into thinking that they aren’t actually paying to see a sequel of a sequel of a sequel. When you think of it that way, it sounds horrible, so they made only the most obscure (possibly even unintentional) reference to its number. They also tried to make it sound like it was absolutely, positively going to be the last one in the series, though it’s impossible to trust anyone who says that.

Shrek (possibly like the franchise that bears his name) is having a midlife crisis. Face it, ogre triplets seem like too much for anyone to handle, and years spent in a swamp, terrorizing people, doesn’t exactly prepare one for family life. They don’t really get into what other ogre families are like, but probably they’re usually a lot less civilized. That’s relatively civilized, of course, because Shrek isn’t exactly totally housebroken.

Anyway, after a series of predictable days, capped off by one really lousy day, Shrek has had enough. He wishes for just 24 hours to go back to his old ways, the days when he could frighten entire villages with one well-placed roar and people panicked and fled when they saw him coming. Unfortunately for our hero, one Rumpelstiltskin overhears that ill-phrased wish, and is ready to take advantage with one of his apparently endless supply of magical contracts. He’s sort of like a fairy-tale shyster lawyer, I guess.

It’s at this point that the movie reboots and we’re almost back where we started. Rebooting has gotten awfully trendy lately and I’m starting to wonder when it will stop; but it’s showing no signs of slowing down yet, for better or for worse. And hey, at least Rumpelstiltskin’s having fun. He’s got a whole crowd of wicked witch groupies, his own ongoing rave, and an endless supply of funny wigs, one of which kind of made me think of the Red Queen. What he doesn’t have, however, is Shrek, and he desperately wants to rectify that little oversight. You can’t blame him. There’s probably little more unpredictable than a rampaging ogre on the loose.

But because of the reboot, he’s on his own, at least to start with. There are Wizard of Oz-style Wicked Witches everywhere, hurling pumpkin bombs like the Green Goblin. Along with people being afraid of you comes the fact that they also want to chase you with torches and pitchforks. And Donkey doesn’t even recognize him — for real, not one of those “I’m mad so I’m pretending I don’t know you” things.

Part of the reason this is better than the last sequel is because it goes right back to the roots of the series… so it’s also part of the reason why you feel like you’ve seen a lot of the film before. Still, déjà vu aside, it’s a pretty good flick — not spectacular, but solid and funny, with some wild, cartoony fights and plenty of fun escapes and last-minute victories. Shrek’s attempts to re-befriend his friends are a little painful at times, but that’s kind of just him.

So a solid three and half out of five for this one. I know it isn’t doing well dollar-wise, but that may be at least partly because Shrek 3 was, by all accounts, pretty frighteningly bad, and you can’t blame people for being a little nervous about paying to see a fourth film in the series in the theatre. But give it a try — it isn’t all new, exactly, but it’s a fun ride just the same, and I have a feeling there will be much worse summer movies that you really wouldn’t want to spend your money on.