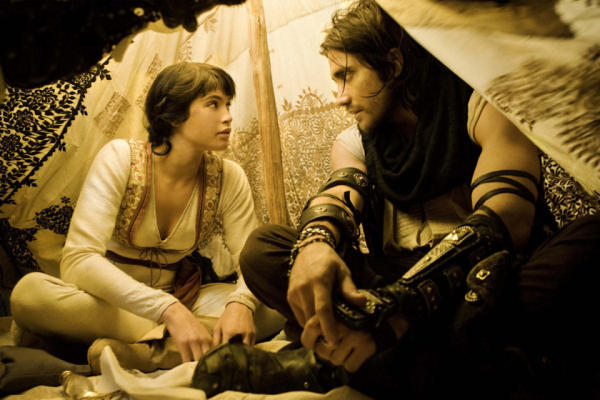 Thanks to Hollywood’s generosity and thoughtfulness, people like me (who haven’t owned a game console since the Nintendo 64 was the latest thing) can still find out all about the new, hot games — if they’re willing to wait until they’re no longer new and hot, since it takes a while to get one of these movies released, of course. This is one such movie, and apparently the subtitle is important, since The Prince of Persia is apparently quite a different animal than The Prince of Persia: The Sands of Time, the second one being the game sequel to the first one.

Thanks to Hollywood’s generosity and thoughtfulness, people like me (who haven’t owned a game console since the Nintendo 64 was the latest thing) can still find out all about the new, hot games — if they’re willing to wait until they’re no longer new and hot, since it takes a while to get one of these movies released, of course. This is one such movie, and apparently the subtitle is important, since The Prince of Persia is apparently quite a different animal than The Prince of Persia: The Sands of Time, the second one being the game sequel to the first one. I thought at first that it meant that the movie was a sequel, and wondered how I’d managed to miss the first flick so completely, but as it happens this is the Prince’s first trip to the big screen, so it turns out that I’m not actually that bad at noticing things.

There’s some mess about keeping the game canon and the movie canon separate, but since all I know about that is what I learned from asking some gamer friends about it last night, I’m not going to deal with that too much. They rebooted the game series, apparently, and since the movie plot isn’t really the game plot anyway, it doesn’t seem like too big of a deal. It’s like they took all the main elements of the game — the dagger, the characters, the Sands of Time — threw them in a blender for a while, and presto! The movie was made. Unlike Star Trek, however, they didn’t really update, exactly; they mainly just put things in a different order.

The villains are new, though, it seems — in the game, you’re mainly killing sand creatures. Here, our hero, the Prince of Persia (you’re going to get really tired of hearing that phrase by movie’s end, by the way) gets to fight everything but. First, there’s a bunch of people from someplace called The Valley of the Slaves (led by Alfred “Doctor Octopus” Molina as shady entrepreneur Sheik Amar) who want to grab him. Then there’s the supposedly long-disbanded group of hired killers from House Atreides who want to kill him. No, wait. They’re actually called the Hassansin, based on the medieval assassin cult, the Hashashin. They just look like they’re from Dune because they keep baby sandworms as pets, wear all black in spite of living in a desert, and have creepily blue eyes from the spice they take to inspire visions of the future. But they’re not from Dune at all.

Anyway. People didn’t have names in the original game, I’ve also learned, but they have to have them here. Jake Gyllenhaal is Dastan, the Prince of That Place. As a raggedy orphan child, he impressed the King of That Place (Ronald Pickup) with his bravery and loyalty, and was rewarded by being adopted by the king, to be raised alongside his two other sons: Tus (Richard Coyle), the elder, anxious to be as great as his father; and hotheaded Garsiv (Toby Kebbell, cast as someone named Drake Stone in the upcoming Nicholas Cage flick The Sorcerer’s Apprentice, which incidentally will also feature Alfred Molina). Ben Kingsley (Shutter Island) rounds out the happy family as the king’s brother and chief advisor Nizam. Dastan is pretty wild, always ready to leap into a fight, though he isn’t very good at fighting in the first fifteen minutes of the movie. He takes some kind of a crash course, though, because he’s almost unstoppable after that. And he can dodge anything, including flying crossbow bolts and hails of arrows, but then, so can most video-game heroes.

The video-game heroine, here called Tamina, is Gemma Arterton of Clash of the Titans, a princess of a city called Alamut. This is a real place, a now-destroyed fortress in modern Iran, actually one of the Hashashin strongholds, though I don’t think the filmmakers meant to make that particular connection. They make weapons at Alamut and sell them to whoever wants to make war against That Place; except they don’t because there are no forges at Alamut, according to Tamina, so it’s no wonder that they get overrun so easily by the attack from Dastan and his brothers. Buying enough weapons to outfit any kind of an army must be terribly expensive. They’re in the middle of nowhere, so just shipping anything that far must cost an arm and a leg.

But back to the plot. There is one, sort of. Tamina is the latest in a long line of guardians for the dagger. I think it’s just called the dagger; it doesn’t seem to have its own fancy name. It’s made of metal, so somebody must have forged it somewhere; but the important point is that it has a hollow, crystal handle that can be filled with sand. If it’s filled with the right sand, then pressing the ruby on the end of the handle will let the sand out, and reverse time in its tracks. Cool, huh? It’s only a minute’s worth of cool, since that’s all the sand you can fit into the handle, but it’s still very handy.

Though the dagger is a closely guarded secret, and most people have never heard of it except perhaps as wild stories, someone knows about the dagger and wants it, no matter what. This someone needs someone else to take the blame, though, and since he’s never liked Dastan, he’s elected. It’s pretty obvious from the beginning who the villain is, but I’m trying to be discreet. It takes Dastan a while to catch on, anyway, and thus we have his struggles to uncover the bad guy and not get killed in the process. He escapes certain death like twelve times. I lost count. There’s always something for him to leap over or climb or do gymnastic stunts on so he can get away. Oh, and in spite of how big they say the Empire is, it’s incredibly small. If you lose track of anyone, you don’t have to bother looking for them, because tomorrow you’ll turn around and there’s whoever was missing right there. It’s very convenient, since he also loses track of Tamina, the dagger, and/or the various people trying to kill or capture him on a regular basis. The game is centered on just the palace, so that would make sense there; but not when everyone’s roaming all over That Place.

All the actors are British, except for American Jake and the leader of the Hassansin, who’s from Iceland(!), so no one has the right accent. Dastan and brother Tus especially don’t look very middle Eastern — though to be fair, the screenshots from the game make the Prince look like he has blue eyes, so maybe he isn’t supposed to be all that middle-Eastern-looking. The point is, it stays true to its video-game origins by being improbable, wildly historically inaccurate, and completely over the top with crazy fight scenes and dramatic changings of history.

So whether you like it or not depends largely on what you’re looking for in your movie viewing. If you want to sit back and let the effects and the action sequences wash all over you while you munch popcorn, you’re all set. Four idols out of five at least. But I’m actually giving it three and a quarter, and the quarter is solely because Gemma Arterton is pretty and manages to explain all the mystical, convoluted background for the film without sounding ridiculous or crazy. It’s really only a three-idol movie at best, a nice, mindless way to spend a couple of your summer hours. Fans of the game might prefer to spend those two hours dusting off their copy of the game and trying it out again, but for the rest of us, it’s a fun little glimpse into the world of adventure games without having to spend $200 on a console.