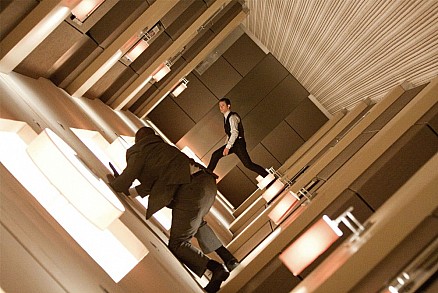 You know those “late for class” dreams that so many people seem to keep having even years and decades after leaving school? I still have those now and then. Thankfully, I never had any of the abruptly-ending staircases they have here, but there were stairs that skewed off at dangerous angles, where walking was next to impossible and I was forced to go on hands and knees to reach the top. In the dream, I would rant and complain about what a stupid style of architecture this was, but it never occurred to me that there was actually anything improbable about it until I woke up.

You know those “late for class” dreams that so many people seem to keep having even years and decades after leaving school? I still have those now and then. Thankfully, I never had any of the abruptly-ending staircases they have here, but there were stairs that skewed off at dangerous angles, where walking was next to impossible and I was forced to go on hands and knees to reach the top. In the dream, I would rant and complain about what a stupid style of architecture this was, but it never occurred to me that there was actually anything improbable about it until I woke up. So Cobb has it exactly right.

Leo is Cobb, by the way. I’ve reviewed him in three movies now, and made fun of him a little about two more, so I’m now calling him Leo since it’s so much easier to type. Cobb is a thief — a highly specialized thief who steals from people’s subconscious minds. This is called Extraction, and you can imagine the possibilites. The most secure safes in the world are of no use if someone can waltz into your dreams while you’re sleeping and skip merrily away with whatever information they like. It’s a revolution in industrial espionage!

Early on in the dream — I mean the movie — Cobb and his team are trying to raid the subconscious of a man named Saito (Ken Watanabe). He runs a giant energy company, so he has money to burn, but he’s still having some trouble with his largest competitor. So after raiding his subconsious turns weird — everything in the movie turns weird at some point, of course — he ends up offering Cobb and Co. a job. The surviving members of the team, at least.

Still with Cobb is Arthur (Joseph Gordon-Levitt, The Lookout), his right-hand man. Some have titles — Ellen Page as Ariadne is the Architect who designs the dream landscape, and Dileep Rao as Yusuf is the Chemist (see below) — but Arthur doesn’t get one. He also has his hair slicked back exactly like Leo’s so in those earlier crazy action sequences where the cameras are shaking and things are randomly exploding or disintegrating, it’s sometimes hard to tell them apart. Later on they get separated so then it’s okay.

The hook is Inception itself. Extraction is the removing of an idea (I keep wondering if Cobb’s thievery means that his victims actually forget they ever had that knowledge in the first place, but that’s never discussed); Inception is the implanting of an idea. It’s generally considered impossible, since although it’s easy to plant an idea in someone’s head — quick, don’t think of an ostrich! — it’s insanely difficult to put an idea in someone’s mind without that person knowing full well that the idea came from someone else’s mind; thus defeating the purpose of trying to be sneaky about implanting said idea.

But over Arthur’s protests, when Saito asks, Cobb insists that it can be done. And if Cobb can do it, Saito promises to give Cobb back the life he had to flee from as a wanted criminal. This is where Arthur knows they’re in for big trouble, and he is so, so right.

Cobb and Arthur assemble a new team: the aforementioned Ariadne and Yusuf, plus Eames (Tom Hardy — and look, he was in one of the first movies I ever reviewed!), who also doesn’t get a job title. Then Saito decides he’s coming along, too, and Cobb wisely doesn’t argue too much with a man who can wipe an international criminal record clean with one phone call. Ariadne blackmails her way into coming along even though she isn’t supposed to, because Cobb promised Ariadne’s teacher, Miles (Michael Caine). He’s apparently Cobb’s father, but must not have the same last name since Ariadne doesn’t ask if they’re related, and believe me, she would have. She’s the nosiest person who ever lived. Kitty Kelley would call her too inquisitive. Pandora herself would tell her to back off about prying into people’s private stuff. And yet Cobb keeps telling her things and letting her find them out on her own, instead of locking her up where she can’t bother him again with all her questions and sneaking around. Everyone still seems to like her, though, in spite of this. It would drive me crazy.

Anyway, the only possible way Inception can work is to have a dream within a dream… within a dream. Two layers isn’t too uncommon. Three layers is practically unheard of. Then there’s some problem with the fact that they have to use sedatives for that to work, which confused me a little. It seemed like they were trying to say that they usually fell asleep whenever they needed to without sedatives, and that doesn’t seem probable. But we’ll go along with the implied workaround the film hints at; namely that they simply have to be more deeply asleep than usual, hence the Chemist and his stronger, customized concoctions.

Cobb is confident this can be made to work. This is in spite of the fact that his wife — or a projection of her, or the actual her, or the dream-her, or whatever — keeps intruding into the jobs he’s on, usually with violent and scary results. Her name is Mal. I was expecting Mal as in short for Mallory, but it’s pronounced “Mahl”. This, not coincidentally I’m sure, is French for bad, as in malfunctioning; and also pain or illness. And while we’re on the subject, the song that the team uses to help coordinate their awakenings — timing is everything with three dreams going on, apparently — is an Edith Piaf classic called “Non, Je Ne Regrette Rien”. Literally translated, this means, “No, I regret nothing;” and this is clearly also not coincidental, given how often the whole subject of regret comes up. The fact that Marion Cotillard, who plays Mal, also played Edith Piaf in the biopic La vie en rose actually is coincidental, though, according to writer/director Christopher Nolan, who should know.

I won’t even try to explain the rest. With three layers of dreams, three different people “hosting” those dreams, and all the deceptions going on, any attempt to summarize without summarizing everything would only confuse all of us. You should see the synopsis someone posted on imdb. It goes on for pages and still doesn’t cover everything.

It was an excellent dream, though. I mean movie. I got a little restless at the end — I was having trouble sorting out who was waking up from what and when, and I was getting tired of the slow-motion stuff, though to be fair that seemed like the only way to film it — but overall it was very good. However fake the dream worlds they build are, the characters are real; and though you may get confused about the details (I think there may be a plot hole over who hired them to delve into Saito’s mind in the first place, for instance, but heck if I can be sure), there still seems to be enough to hold everyone’s attention. And everyone was chattering about the plot as they were leaving, which is good. I know what people were talking about because several rows of seats were blocked off, and everyone detoured right past me while I was trying to watch the credits. Yep, just my luck.

Four and a half out of five. The imdb voters have it up at #3, which is crazy, and often happens just after a movie is released; but it was a very good, enjoyable film. If you don’t like logical conundrums, though, definitely stay away from any form of discussion as to why such and such happened in the second dream but not in the third, or anything where people are trying to calculate the time differentials between the dreams. Reading that stuff makes me edgy.