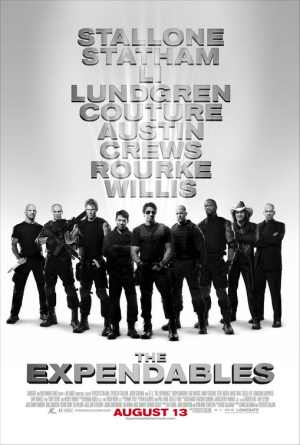 They’re expendable and proud of it. I don’t get it, either, but they are. Sylvester Stallone even has the word tattooed on his back.

They’re expendable and proud of it. I don’t get it, either, but they are. Sylvester Stallone even has the word tattooed on his back.

And the movie is pretty much all about Sylvester Stallone, as you might expect when he’s writing and directing. The screen is loaded with tough guys, even overloaded, but it’s Sly’s movie, all right. I’m not very up on my tough guys, though — Except for Sly, I only recognized Jason Statham, Jet Li, and Steve Austin. Well, and Eric Roberts, but he’s hardly a tough guy. He’s always playing villains when I see him, but he’s so the opposite of scary. Here he looked like a skunk and was about as hard to kill as a cockroach.

Then there’s Tool, Mickey Rourke of Iron Man 2 fame. He used to work with Sly and now owns a tattoo parlor and acts as a sort of headhunter. I mean, a headhunter in the helping Sly and his team find jobs sense, not actual head-hunting. You have to clarify that sort of thing in this sort of movie. I do remember at least one person actually getting his head cut off, though by the end there was so much bloody death it was hard to sort it all out. And of course there was Bruce Willis of Surrogates as Church (not his real name) and Arnold Schwarzenegger as Trench, which I suppose isn’t his real name, either.

See, this is clearly too many big names for one film. Four paragraphs and I’ve hardly touched the plot! Thankfully, the plot is simple. Bruce hires the Expendables to remove dictator General Garza from a made-up island called Vilena. Giselle Itié as Sandra is their local contact. Bad things happen. Jason Statham throws knives and Jet Li kicks people. Terry Crews fires the loudest gun in the world. Dolph Lundgren blows bad guys into tiny pieces. Jason sort of half-tries to win back his girlfriend Lacy (Charisma Carpenter) who, not unsurprisingly, thought she’d been dumped when he vanished without a word for a month. And the whole team spends a lot of time shooting up and otherwise trying to destroy the General’s really cool castle. I know it was a bad guy hangout, but it seemed such a shame to work so hard at wrecking it. They worked hard at wrecking everything, though. They had less than two hours to break everything they found, so they had to be quick and efficient.

Basically, there’s just enough plot to string together the action scenes and give plenty of excuses to blow things up. I suppose if you’re into the whole action movie hero genre, it’s pretty cool to see Sylvester Stallone and Steve Austin doing their best to kick the crap out of each other, or to see Dolph Lundgren mopping up the floor with Jet Li, but it wasn’t such a thrill for me. In fact, it was only two and three-quarters out of five worth of thrill in my opinion, and that’s not all that good. Part of the problem is how interchangeable the characters were. I mean, when you recast one role four times, and just about every other casting choice also gets rearranged sooner or later, it’s easy to wonder where the character development is. Jean-Claude Van Damme didn’t want to be in the movie because he said there was no depth to the role. Jean-Claude Van Damme said that. And you know, he was right. The only depth to the entire film is when Sly goes down into the cellar to get beaten up by Stone Cold Steve Austin.