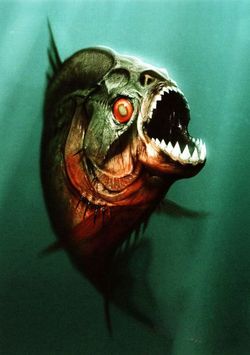 I thought I was loopy, going to see this movie. At the ticket counter, I mumbled the title in shame and the girl had to ask me to repeat it. But what was I going to do, watch the sequel to a kids’ movie that I hadn’t even seen? Or that odd-looking comedy with Jennifer Aniston? Thanks to that huge, unpleasant ad on imdb, I couldn’t bear to take the risk of seeing what’s his name make that funny face again.

I thought I was loopy, going to see this movie. At the ticket counter, I mumbled the title in shame and the girl had to ask me to repeat it. But what was I going to do, watch the sequel to a kids’ movie that I hadn’t even seen? Or that odd-looking comedy with Jennifer Aniston? Thanks to that huge, unpleasant ad on imdb, I couldn’t bear to take the risk of seeing what’s his name make that funny face again.

So instead I went to see the guy who I always get mixed up with what’s his name, Jerry O’Connell, play with mean, ugly fish. Not deliberately, of course. I may be the only person in the world who gets those two mixed up, but I do. Jerry O’Connell plays Derrick Jones, a character who is, for legal purposes, not at all based on any actual person even remotely like Joe Francis, creator of the “Girls Gone Wild” franchise. I didn’t have the faintest idea who created “Girls Gone Wild” before he threatened to sue, so maybe he should just decide that there’s no such thing as bad publicity and let it go.

Derrick makes the “Wild Wild Girls” videos, which as you can tell from the title are nothing like the “Girls Gone Wild” series. He’s filming girls on spring break at Lake Victoria, Arizona, which isn’t a real lake. The movie is filmed at Lake Havasu, Arizona, which is a very pretty place, but right now I wouldn’t even dip a toe into that water if it was the last place to swim on earth. He hires local kid Jake Forester (Steven R. McQueen) when his guide fails to show.

Meanwhile, Jake’s mom and local sheriff Julie (Elisabeth Shue) is discovering that Bad Things are happening. Local fisherman Matt Hooper (Richard Dreyfuss — yes, same actor and same character from Jaws. This isn’t technically a Jaws spoof, but a remake of a Jaws spoof, but it works out much the same.) is missing, the lake is full of writhing creatures that destroy everything around them, and there are these weird, ugly fish all over the place. She and Deputy Fallon (Ving Rhames, Surrogates) want to close the lake, but you try telling 10,000 drunken, half-naked college kids to stop having fun. You could be holding a machine gun and they’d still just look at you funny for a second and then go right back to groping each other. They don’t start noticing anything until the person next to them gets shredded.

There’s a lot of shredding, by the way. You’re probably thinking, “Well, duh, it’s a movie about packs of carnivorous fish! Of course there are people getting shredded everywhere.” Well, I thought I was prepared for the level of blood and gore, too. After the gruesome killing at the end of The Hitcher I felt ready for anything. I survived two onslaughts of death by spinning helicopter blade, for heaven’s sake. Flesh-eating fish couldn’t possibly be much worse — or so I thought. I was wrong. Very, very wrong.

Aside from the blood, people being sliced in half, and a particularly icky scene involving a certain gnawed-off body part, though, it was actually a fun movie. It was like a much raunchier, bloodier version of Evolution, with less-developed characters. There are too many characters and not enough movie to develop them here, so it’s no wonder; but the principle is the same — it’s a movie about man vs. bizarre, hostile animals that doesn’t take itself at all seriously. Jerry O’Connell chews the scenery, the adorable kids get into cute trouble, and the whole thing drips with the over-the-top hedonism of spring break. They didn’t just make a gory movie, they reveled in making a gory movie, and you can tell. Any movie that was fun to make is almost certain to be fun to watch, even if it doesn’t have many other redeeming qualities.

But this one actually did have a few other redeeming qualities, like Elisabeth Shue being tough and — yes, I admit it — even Jerry O’Connell chewing the scenery. He’s crazed, but it’s a fun sort of crazed. It gets three and a quarter. Yes, I docked a quarter for the blood, and the gore, and the blood. Did I mention the gore? It even has a couple of useful messages. First, think green, because sometimes just one little piece of garbage will destroy more than you can possibly imagine; and second, there’s a reason (far beyond merely keeping your hair dry) why the swimming cap was invented.