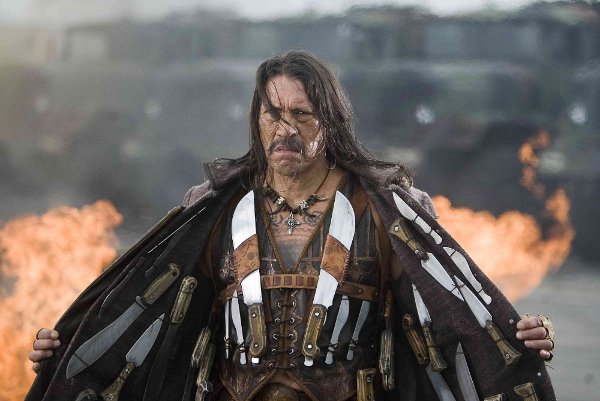 A few years back, Quentin Tarantino and Robert Rodriguez made two short, weird movies where lots of people got shot in bizarre and unusual ways and put them together into one feature called Grindhouse, with trailers for fake films in between. One of those was Machete, and it starred — I guess starred is still the right word — Danny Trejo (Predators) and Cheech Marin, with Jeff Fahey, Alicia Rachel Marek, and Tito Larriva also featured. All five of them are in this Machete, though I couldn’t tell you if they’re all playing the same parts. Close, at least — Cheech Marin is listed as a priest, just like here; and of course Machete is Machete. But the bit in Grindhouse with the leg replaced by a machine gun just didn’t do it for me, so I never did watch that movie. Those movies. Whatever.

Anyway, you know how in Alice in Wonderland, Alice is expected to believe six impossible things before breakfast? It’s the same principle here, except I lost count at about 47 impossible things. I’m no medical expert, but I’m pretty sure you can’t do that with intestines. It’s sort of like a cross between a really gory video game, a twisted seventies exploitation film, and a seventies soft-porn. Everything’s seventies, really, except the computers and the video cameras. Lindsay Lohan has a sort of Farrah Fawcett thing going with her hair, and the cars are all muscle cars from the seventies, I think. Many of them are the kind that bounce up and down. I always thought that was to make them look intimidating, but keep an eye out here for an alternate explanation.

Machete is an ex-Mexican Federale. A drug lord named Torrez — I guess he’s supposed to be Mexican, too, except he’s played by Steven Segal — kills Machete’s wife and daughter before leaving Machete himself to die. He’s very startled to learn, years later, that Machete is still alive, even though he shouldn’t be startled. After all, he made the classic arch-villain mistake of leaving his nemesis to die instead of just killing him already.

Even more startling is the fact that a mysterious man named Booth (Jeff Fahey, credited as “Boss” in the fake trailer) has hired Machete, now a day laborer, to assassinate Texas senator McLaughlin (Robert DeNiro, Stardust, The Good Shepherd). I think I was the only one who laughed at the fake campaign ads. I mean, I felt awful for laughing, because they were so crude and terrible, but they were so ridiculously over the top I couldn’t help but giggle. Everything’s ridiculously over the top, of course, though somehow I had much less of an urge to laugh over things like the fake nurses. Their medical training consisted entirely of being taught how to look good in short skirts and how to kiss boo-boos and make them better. They seemed to shoot reasonably well, though.

As you may have guessed, the assassination goes horribly wrong, of course, and Machete ends up on the run from just about everyone. Booth needs to kill his patsy, the police need to catch him so they don’t look bad, and Torrez just wants to make sure he’s dead this time. Michelle Rodriguez (she was in Avatar somewhere) is tough-girl Luz, who runs a taco stand and a super-secret organization that helps Mexicans crossing the border. She’s chasing him, too, but in a different way. And U.S. Immigrations and Customs Enforcement officer Sartana (Jessica Alba, thankfully minus the unconvincing blonde hair from Rise of the Silver Surfer) and her stiletto heels are after a promotion, and thinks that finding Machete is the perfect way to do that. Oh, and then there’s the leader of the local good old boy self-appointed border patrol gang, Von Jackson (Don Johnson — it almost rhymes!), who wants to kill anyone who looks Mexican and is therefore solidly behind Senator McLaughlin’s plan to build a giant electric fence along the border.

Throw all that together, blend well, and garnish liberally with lots of sharp objects and naked women, and that’s the movie. A friend of mine said he couldn’t talk his friends into going to see Machete, so I suggested that he mention the naked women. There are three or four, at least, and one of them is Lindsay Lohan, a drug-addicted wanna-be model trying to get famous through her website. She’s playing herself. Wait, I mean she’s playing April, Booth’s daughter. Anyway, she does some scary, sacrilegious things here, though she’s not alone in being sacrilegious; so if that bothers you, consider yourself warned.

It’s also sort of like a Bond movie, in that every pretty girl throws herself at Machete. Now, I’m thinking Danny Trejo is a really nice guy — like the old saying about how intelligent actors do best at playing very unintelligent characters, I always think that the people who play the best scary, ruthless types are actually incredibly nice — but if I saw him, I think my first thought would be finding the nearest exit in case a terrible fight is about to break out. He just radiates the look of someone about to start a terrible fight… which I guess is the point here, so excellent job on his part.

I hardly know what to rate it, though. It almost defines ‘guilty pleasure’ — I kept telling myself that I should just be appalled by the whole thing, but somehow it wasn’t quite like that. Let’s try three out of five. Yeah, that’s about right. It also defines ‘not taking yourself too seriously’, and Hollywood can always use more of that.