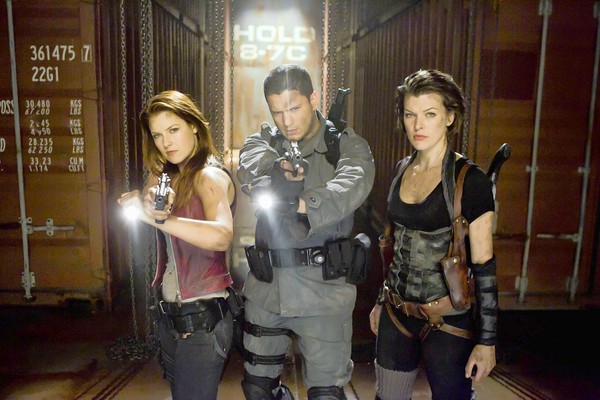 There’s probably a fascinating story behind the fact that the very first zombie unleashed upon the earth in this series looks like she should be out clubbing instead of tearing out people’s throats with her teeth; but I don’t know what it is. Yes, what I said on Twitter was true — I’ve never seen any of the Resident Evil movies or played any of the games, though I’m not sure the games thing really matters at this point.

There’s probably a fascinating story behind the fact that the very first zombie unleashed upon the earth in this series looks like she should be out clubbing instead of tearing out people’s throats with her teeth; but I don’t know what it is. Yes, what I said on Twitter was true — I’ve never seen any of the Resident Evil movies or played any of the games, though I’m not sure the games thing really matters at this point. So I don’t know if those spider-things showed up before, or if Alice killed things with quarters before, or why one of the characters is named after a chain of discount stores. They aren’t really spider-things, by the way — they only leave six little holes in your clothes instead of eight.

Alice (Milla Jovovich) does explain a few useful things, like the fact that she met Claire (Ali Larter, Heroes) in the desert 18 months ago. Alice kind of over-explains everything, actually. Sometimes she narrates something into her video camera, then the exact same thing pops up in the dialog. I can’t wait until that stops being a trend. Anyway, this time around, Alice and Co. are looking for Arcadia. As in 28 Days Later, an automatic broadcast from Arcadia promises food, shelter, and safety from the zombie hordes; and pretty much everyone who could has gone off in search of it.

Some of the people who weren’t able to go off in search of it are now stuck inside a prison in Los Angeles, an island in a sea of zombies that look like they’d just love to come inside for a snack. They don’t seem to do anything except hang around and drool whenever they spot a human inside, but they don’t seem to starve to death, either. And as is traditional with zombies, they don’t seem to want to eat each other, not even as an emergency standby.

Some of the people now imprisoned by zombies include Bennett (Kim Coates), a smarmy Hollywood producer; actress Crystal (Kacey Barnfield); former pro-basketball star Luther West (Boris Kodjoe, Surrogates); and the mysterious Chris (Wentworth Miller). In spite of the fact that everyone (except Crystal and her British accent) sounds perfectly American, it’s actually a pretty cosmopolitan cast: Milla Jovovich was born in the Ukraine, Wentworth Miller in England, and Boris Kodjoe in Austria. Anyway, fortunately the prison has an endless supply of pre-made torches for light, and water that just keeps right on running. This is one of those “tidy” zombie films, as I think of them, where they don’t worry much about little problems like exactly where food, torches, and working bathrooms will come from after the apocalypse.

Alice and Claire end up stuck with the other, er, prisoners, but they want to get to Arcadia, too, and what Alice wants, Alice gets. Everything starts going wrong, of course, but hey, she thrives on challenges, especially the sort that are easy to shoot or blow up. She even reinvents bungie-jumping! You may have seen the giant axe, and the giant guy carrying it, in the previews, and I still don’t know what his story is. The characters seemed equally startled to see him, so I don’t think he was in past movies. And granted, he was seriously scary, but honestly, while that axe of his is great for knocking down walls, it’s much too slow for hitting fast-moving targets like Alice and Claire. It’s got a weapon speed of something like eight, and that’s bad.

The Umbrella Corporation is everywhere, too, of course — that’s one of the few things I knew about even before I got my ten-minute briefing — under the sinister leadership of Albert Wesker (Shawn Roberts, Edge of Darkness), who looks a lot like Hugo Weaving as Agent Smith from the Matrix films. He fights a lot like him, too. The little red and white Umbrella Corp. logo reminds me of The Village. I never did see Rover, though, and the Umbrella people just aren’t as friendly. Well, superficially friendly, at least.

In spite of being a little lost, I was never quite too lost to know what was going on; so that was good. It’s pretty predictable, but I expected that, and overall it was actually sorta fun. It was a little annoying that they insisted on identifying things as traps and then waltzing right into them anyway, but that’s traditional. So I’ll go for three and a quarter out of five. The quarter is mainly because it wasn’t as gory as I was afraid it was going to be. The zombie dogs were pretty disgusting, but compared to Piranha 3-D, it didn’t even register. So overall, a surprisingly friendly sort of zombie apocalypse flick. I kind of wish they hadn’t made it 3-D, but it was inevitable. The imdb says that this is the first film based on a video game ever made in 3-D. I know, I didn’t believe it either. But there’s another first gone, and it could have been done by a much worse film.