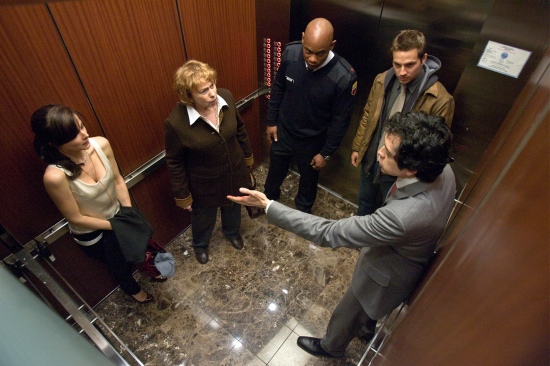 There’s one point in this film where the five people trapped in that ill-fated elevator all look around at each other for something to write with, and no one has anything. I always have a pencil and paper handy myself — I never know when I might have to rush off to the theatre for an emergency review. Or something. So if they’d just had me there, things might have turned out better. Well, except now I’ll never get on an elevator again as long as I live, so the fact that I would almost certainly have a pencil wouldn’t help anyone.

There’s one point in this film where the five people trapped in that ill-fated elevator all look around at each other for something to write with, and no one has anything. I always have a pencil and paper handy myself — I never know when I might have to rush off to the theatre for an emergency review. Or something. So if they’d just had me there, things might have turned out better. Well, except now I’ll never get on an elevator again as long as I live, so the fact that I would almost certainly have a pencil wouldn’t help anyone.

It would probably just have broken the second anyone tried to click out some lead, anyway. That’s how this movie rolls. If something can break, slip out of your hand, drop on your head, short-circuit, or just plain not be there when you really really need it, it will.

The badness starts with a man jumping from a very tall building and landing on a bakery truck. Isn’t that always the way? Homicide detective Bowden (Chris Messina) is called to the scene, and starts untangling the oddities of the crime scene. He’s a recovering alcoholic — his wife and child were killed in a hit and run, and he took it about as well as you might expect. But he’s very good at his job, and also practically a one-man incident reconstruction team.

Meanwhile, inside that same very tall building, five random people get on an elevator, which works long enough to get them really high up and then just stops (see above). Strangely, they have names in the movie but not in the credits. They are, from left to right in the picture below, Young Woman (Bojana Novakovic from Edge of Darkness, lasting longer than ten minutes this time); Old Woman (Jenny O’Hara); Guard (Bokeem Woodbine); Mechanic (Logan Marshall-Green, Across the Universe); and Salesman (Geoffrey Arend). The Salesman looks like a refugee from the eighties somehow, but no one else does. You can tell they tried to make it not look dated in any way in general, so I think they meant to do the eighties thing. It does help make him look smarmy.

As the head building security guard, Lustig (Matt Craven, Public Enemies), quips, that makes a full house: two queens and three jacks. Their elevator, number 6, has slipped into inspection mode and is now just hanging there, “dangling over nothing,” as Old Woman puts it. She’s the sort of woman you’d hate to have as a mother-in-law, because she’s convinced that everything is wrong and also entirely your fault. Young Woman is wealthy and spoiled. Guard has anger-management issues. Mechanic has been on a tour of duty in Afghanistan, and everyone looks at him like he has PTSD and will snap at any moment. And Salesman is, well, smarmy.

It doesn’t take long before tempers start fraying. Even aside from all the overtones of supernatural evil, the only thing that’s still working on the elevator for a long time is the Muzak. Lights fail randomly, the car refuses to move, but they can still hear the tinny strains of “Don’t Sit Under the Apple Tree,” lucky them.

I’ve called things random twice now, but according to other security guard Ramirez (Jacob Vargas), none of this is random. It’s all the Work of the Devil. Unfortunately, he’s really bad at explaining things, so no one listens to him until the end, of course. But I mean he’s really bad at explaining things. I knew what he was trying to say, but when he started rambling about toast landing jelly-side down and kids hitting tables, I think he managed to confuse the entire audience.

Now, M. Night Shyamalan (The Last Airbender) wrote the story and produced, but for once he didn’t direct and write himself a cameo part, too. There are still definite M. Night touches — there are strange, awkward pauses in the dialogue and people answering questions without quite answering questions; and pretty much the entire last fifteen minutes looks like it was directed by him after all — but it isn’t a one-man show like Bowden reconstructing crimes, and maybe that’s part of what makes it good. This is not recent M. Night work; this is like the glory days of The Sixth Sense, Unbreakable, and The Village. I know, people ranted and complained about The Village, but it works beautifully, I think, because it really isn’t a horror movie the way everyone seems to think. And maybe you have to be a comic geek to truly appreciate Unbreakable, but I am and I did.

Ahem. Anyway. Rating time. Three and three-quarters out of five. It made me guess and pay attention, and someone has clearly learned from the mistakes of flicks like Knowing and M. Night’s own Signs — the less you show the monsters, the scarier they are. You get basically three small glimpses of Evil in the film, and each is seriously creepy… mainly because they had the sense to leave the details to the imaginations of the audience. There are times when you’re looking at an utterly black screen for a few moments, just hearing things, and those are probably the scariest moments of all. Alfred Hitchcock summed it up nicely: “There is no terror in the bang, only the anticipation of it.” And if the goal of the filmmakers here was to increase physical fitness by encouraging the use of the stairs, they succeeded brilliantly.