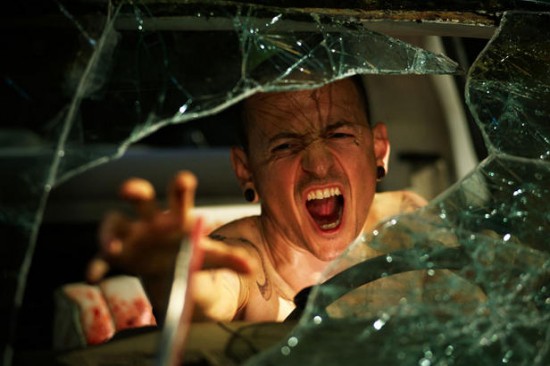 The theatre listed it as Saw 7, but that isn’t the official title. Once a series hits four, filmmakers are very reluctant to put the number in the title, so you can imagine how they feel about sevens. And remember, according to the MCND’s First Rule of Sequels, each sequel must be more expensive and outrageous than the one before it. Past four, they seem to be required to be exponentially more expensive and outrageous, so again, imagine what seven is like. And in this case, the expense and outrageousness is calculated in blood and gore.

I suppose one of the good things about horror movie sequels — at least for the more minor players — is that, if you survive, you’ll move slowly up the credits until you, too, can be a star! Like in Saw III, Costas Mandylor as Detective Hoffman was billed thirteenth. His character didn’t even get a first name. This time around, he’s billed second and has now been named Mark. Betsy Russell, as Jigsaw’s wife, Jill, went from fourteenth to third. It’s the secret to Hollywood success! As long as you don’t mind getting typecast, I guess.

It starts — well, probably the same way all the other movies started, with blood, dismemberment, and death. I’m guessing on most of this stuff because this is the first Saw flick I’ve seen, and frankly, I’m kind of sorry I saw this one. It was as if Rube Goldberg had turned serial killer. And really, why is it that these murderous contraptions always work perfectly? You’d think something would go wrong with them once in a while. Does he kidnap other people before the people he really wants to kill so he can test them out?

Anyway. The first Jigsaw Killer (Tobin Bell) is dead. I’m pretty sure he’s really dead, unlike most movie serial killers. His accomplice has stepped up neatly, though, so we can have more carnage. Jill seems to know the main cop for this movie (Gibson, played by Chad Donella), at least by name, but he wasn’t in any of the previous movies as far as I can tell. He definitely knows Hoffman, though, and not in a good way.

The plot — again, there’s probably about as much plot this time as there ever was — revolves mainly around Jigsaw survivor Bobby Dagen (Sean Patrick Flanery, who was once in a movie called Kaw. I just thought that was interesting.), who has written a book about his terrifying experience and is now doing the talk show circuit with his handlers in tow. He wasn’t in the other movies, so don’t wrack your memory trying to place him. His pretty wife, Joyce (Gina Holden), is behind him all the way as he pushes his book and its traditional self-help message. I actually liked that part — phrases from the book, like “Ignore your detractors” and “Start your life anew” keep popping up. It was like he was tormenting Dr. Phil. Not that I wish Dr. Phil any harm, but it was a nice touch.

My first review on Twitter was pretty much it, though. Blood, death, gloating, done. I must be psychic. If you’ve seen the others, you should at least have the fun of recognizing a few of the faces that show up for Bobby’s group therapy session. I didn’t manage to have much fun myself. I dropped my pencil when I was busy trying to cover my eyes without knocking my 3-D glasses off, but I didn’t really need it. Taking notes wasn’t what was needed, so much as diagramming the murder machines, since that’s what the whole series is about. And it’s hard enough to write in the dark. Forget about drawing anything.

So. Let’s see. If you want to be horribly grossed out and enjoy blood, then this is at least a four out of five. It seems like they tried hard to make a good send-off for the series — they probably brought back just about every character that didn’t die a horrible death — and the rest of the audience seemed to have a good time. Me, I’d give it about a two out of five, and that’s only because there’s a nice bit of irony at the end. Well, and the bit with the self-help book phrases. Let’s average it out and go with three out of five And now if you’ll excuse me, I think I just might be able to manage some food now.