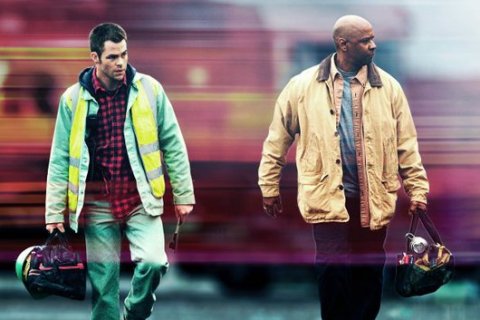 It’s the weekend of one word movie titles! Unstoppable > Skyline, and I’m not basing that on the number of letters in the name.

It’s the weekend of one word movie titles! Unstoppable > Skyline, and I’m not basing that on the number of letters in the name.

It is based on real events, sort of. About as much as Hollywood movies ever are. In Ohio in 2001, Train 8888 (aka “Crazy Eights”) went rogue, with two cars full of hazardous chemicals, and took an unscheduled, unmanned trip across half of Ohio. Here, director Tony Scott moves the train from Ohio to Pennsylvania, swaps four eights for a Triple 7, and multiplies the hazardous chemicals by at least a factor of five, to create a Hollywood disaster movie with flair.

It’s also an unusual disaster movie. Apparently, it contains no special effects as such. There are pyrotechnic effects, of course, but those are real sparks flying from the wheels of those trains. No one spent hours at a computer adding in digital effects after all the actors had gone home. I think we’ve reached the point where low-tech is suddenly becoming cool just because it’s weird.

Engineer Dewey (Ethan Suplee, now in his second Denzel Washington flick, having also been in John Q) is having a bad morning. His boss is yelling at him to get Train 777 out of the way. Said train is 39 cars long, making it about half a mile long. (Or, in the words of Yardmaster Connie (Rosario Dawson, Eagle Eye), the size of the Chrysler Building. Thankfully, the Chrysler Building doesn’t normally contain toxic chemicals, nor does it hurtle along at 70 mph.)

Whatever you compare it to, though, it’s an awkward thing to move, and when he realizes that there’s a switch ahead of him that’s set the wrong way, he doesn’t want to bother stopping, backing up, and restarting. In spite of his somewhat wiser, though still obnoxious, friend’s insistence that getting out of the cab is a Bad Idea, Dewey does just that, and heads over to flip the offending switch to the right spot. Before anyone knows it, Triple 7 is racing away, laughing gleefully as it heads towards heavily populated areas. Well, okay, not really laughing gleefully. There’s just no villain here, unless you count Connie’s idiot boss, Galvin (Kevin Dunn of the Transformers franchise), and I just feel like someone should be laughing gleefully.

Now, I don’t know much about trains, but since I feel like I just took a crash course in locomotive engineering — no pun intended — here’s what I think I’ve learned. Locomotives, like semi trucks, have two kinds of brakes: air brakes, and what they call an independent. Air brakes seem to connect along the entire length of the train, slowing down all the cars at once — obviously preferable — while the independent seems to brake only the locomotive itself. Individual cars will also have hand brakes attached, which work via the little wheels you may have seen on the backs of the cars.

That’s pretty much all the techy stuff you need to understand everything. There is a scene where Denzel Washington, as Engineer Frank Barnes, discusses the problems of stopping 10,000,000 pounds of metal with Inspector Werner (Kevin Corrigan, Fringe) and they briefly start speaking Physicsese, leaving my comprehension in the dust, but it really doesn’t matter.

Conductor Will Colson (Chris Pine, aka Kirk) is brand-new to the job, and he’s got issues. He seems to know his job, but… he’s got issues. Still, he’s stubborn, and his wife and son live in one of the towns that this train-turned-missile will be hurtling through — a town that contains a rather nasty turn in the tracks that’s only safe up to 15 mph. So he’s prepared to channel Kirk and be a Hero.

There are fun minor characters like Ned (Lew Temple, previously in Deja Vu with Denzel), who isn’t an engineer or a conductor but still helps save the day while talking about precision in a laid-back Southern drawl; plenty of nail-biting moments as mileposts and sidings slip past; and a general air of realism that was probably helped considerably by the fact that the two guys who stopped Crazy Eights supplied some of the dialog. So it’s a fun film. It’s almost like a summer action flick — there’s nothing new here, but it’s all well-done and fun to watch. And after Skyline, it was heaven.

Three and three-quarters out of five. I had to subtract a quarter because of Will’s issues. They were kind of jarring. But after you’re done watching Megamind, go check this one out. You, too, will believe that trains can fly.