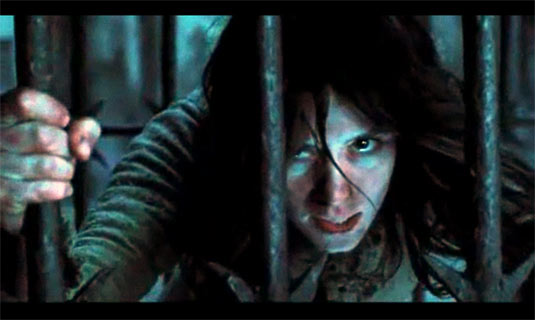 Once upon a time, two crusading knights named Behmen (Nicolas Cage, Knowing) and Felson (Ron Perlman, Tangled) decided they’d had enough of being crusading knights when they figured out that the church was ordering them to slaughter women and children. I guess the infidels didn’t have many soldiers around, since Behman and Felson are crusading somewhere around 1347, and the last crusade technically ended in 1272.

Once upon a time, two crusading knights named Behmen (Nicolas Cage, Knowing) and Felson (Ron Perlman, Tangled) decided they’d had enough of being crusading knights when they figured out that the church was ordering them to slaughter women and children. I guess the infidels didn’t have many soldiers around, since Behman and Felson are crusading somewhere around 1347, and the last crusade technically ended in 1272. There were still crusader knights running around, so we can give them the benefit of the doubt there, but the caption says “During the time of the Crusades”, and that’s kinda misleading.

There are lots of captions to start with. I could barely keep up with writing them down as the movie leapt from battle to battle, and then it turned out none of that stuff mattered because all you needed to get out of the entire sequence was that our heroes were sick of slaughtering people. So they up and leave, thereby breaking their oath to God and getting themselves in big trouble with the church.

When they reach a place called Marburg, Germany, they get caught and dragged before a Cardinal (Christopher Lee, the voice of the Jabberwock in Alice in Wonderland), who’s dying of the latest craze sweeping through Europe, the Black Plague. Well, they call it the Black Plague, but I don’t believe them. The Plague causes swelling of the lymph nodes, which are in the groin, neck, and armpits, which doesn’t explain why the dying Cardinal has a giant lump above his eye. Basically everyone looks like they’re being killed by some combination of gangrene and elephantiasis.

Anyway, the Cardinal says he knows the cause of the plague, and it isn’t fleas. He has a witch (Claire Foy) in his dungeon, and she’s apparently confessed to bringing this pestilence down upon them. If the two ex-crusading knights will only escort her to the Abbey of Severac — apparently not a real place — he’ll forgive them their desertion. The monks at the Abbey know how to deal with witches, thanks to a rare book they have called the Book of Solomon. Or it might be called the Key of Solomon. It has both names in the movie. The point is, they have the last copy, and it has all the rituals you need to stop those pesky witches.

Behmen is reluctant, but finally agrees. Along for the ride are one of the few surviving knights of Marburg, Eckhart (Ulrich Thomsen, The International); the priest Debelzaq (Stephen Campbell Moore, The Bank Job); a seller of dubious holy relics named Hagamar (Stephen Graham, Public Enemies); and Kay (pronounced Kai, played by Robert Sheehan of Red Riding), an altar boy who wants to be a knight. So basically, three high-level fighters — I can’t quite call them paladins — one first-level fighter, one cleric, and one thief.

At some point, it does turn into something like a cross between The Mummy and a Dungeons & Dragons game. The previews make it look like there’s a lot of mystery surrounding the whole question of whether or not the girl is a witch, but there isn’t. Not a bit. It was kind of a let down, actually. The history was doubtful, to say the least — they use words that haven’t been invented yet, like sedative and a word I can’t use here — and as I said, the medical stuff isn’t much better. The accents are all over the place: Ulrich Thomsen is Danish, Nic Cage is from California, and most of the rest of the cast is English. Still, I’m deeply relieved that our heroes didn’t try to sound English.

That was about all there was to be relieved about, though. It was an interesting idea, but it wasn’t exactly a success. Two and three-quarters out of five is the best I can do. The gorgeous scenery wasn’t good enough to distract me from the doubtful plot, and the acting, while solid, couldn’t distract me from the doubtful special effects. The illuminated manuscripts were nice, though.