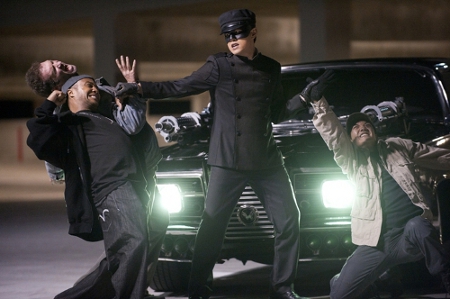 I knew going in that all the good stuff for this flick was already out there in the trailers. It just had this feel about it, you know? Apparently, though, most people don’t watch trailers before going to these things, because at least two-thirds of the audience laughed uproariously at the gas-gun incident. It was funny the first time, but I’d already seen it twelve times, and it just made me sigh.

I knew going in that all the good stuff for this flick was already out there in the trailers. It just had this feel about it, you know? Apparently, though, most people don’t watch trailers before going to these things, because at least two-thirds of the audience laughed uproariously at the gas-gun incident. It was funny the first time, but I’d already seen it twelve times, and it just made me sigh.

So Tom Wilkinson (I don’t see how I’ve missed reviewing a movie of his until now, but it happened) is James Reid, wealthy, driven owner of the Daily Sentinel newspaper. People admire him as a “shining beacon of truth” and the a bastion of integrity, but to his son, Britt (Seth Rogen, and I know exactly how I’ve missed reviewing any of his movies), he’s really just a big meanie. When Britt says he was only trying to help, Dad tells him that trying doesn’t matter when you fail all the time. Then he wonders why his son doesn’t seem to like him much, and doesn’t amount to anything.

Britt’s life of Hummer limousines and wrecked hotel rooms comes to a screeching halt when his father dies. Dad never bothered to show him the business, so he tells the editor-in-chief, Axford (Edward James Olmos), to just run things. Then he meets Kato (Jay Chou). He worked for Britt’s dad, fixing up James’ huge collection of classic cars and making the perfect cup of coffee. He also sketches beautifully, designs and builds rocket launchers, develops the ultimate bulletproofing, beats up five guys at once without breaking a sweat, and sings.

So now, like me, you may be asking yourself what’s left for Britt to do. Well, he supplies the money. And the insults, and… that’s about it, actually. He acts like he’s ten and thinks that he can get away with throwing hissy fits when things don’t go exactly the way he wants them to. I suppose that does work better when you’re also a multi-millionaire, but it’s still kinda grating to watch. The other thing I kept asking myself was why in the world anyone put up with him unless they were being paid to put up with him… and I don’t think you could pay me enough to put up with him.

Anyway, Kato’s talents — when he needs to fight, he sort of “flashes”, like on Chuck — and Britt’s money join forces when the two of them bond over drinks and a mutual dislike of the elder Reid, and accidentally create the Green Hornet. I know it sounds odd, but it really was pretty accidental. They decide to pretend to be villains in order to defeat the actual villains, but this is a fine line to walk, and for once, even Kato doesn’t know how to manage that.

Enter Lenore Case (Cameron Diaz of Knight & Day) as Britt’s new, temporary secretary. He calls her old, pretends he knows what he’s doing and tries to put her on the spot during the interview, and yet she somehow agrees to work for him instead of walking out and slamming the door in his face. She does slam a door in his face, but that happens later.

Lenore, as it turns out, studied criminology as well as journalism. Times must really be tough, if a temp secretary has credentials like that. Unwittingly, she also helps to create the Green Hornet legend, and people like Chudnofsky (Christoph Waltz) aren’t happy about this new upstart. Chudnofsky, you see, has spent his entire life taking control of all the crime in Los Angeles, and he hates it when people aren’t afraid enough of him to fall in line. First of all, I can’t believe that one person can control all the crime in Los Angeles; and second of all, I still can’t make up my mind about the character. If he’s supposed to be scary, it didn’t work. I wasn’t scared of him, and I’m a nervous sort of person. On the other hand, he’d have to be scary to control even half the crime in LA, so there must be something frightening about him. I just can’t figure out what it was.

Then there are huge gunfights, runaway semi trucks, angry gangs, car chases, back-room deals, and a furious Cameron Diaz wielding pepper spray. I liked that last bit. The rest is already becoming a blur of bullets and explosions.

If you liked the Green Hornet in any of his earlier incarnations, pretend this movie never happened. If you like Seth Rogen — if people like Will Ferrell, people must like Seth Rogen — go and enjoy. If you like action movies… well, you still might enjoy it, but I’m not willing to bet on it. I can really only give it two and a half out of five. It would have been two and three-quarters, if Jay Chou had sung more. Did I mention he plays the piano?

There were fun parts here and there — like the pepper spray, and the very last scene — but honestly, my mind was wandering during the last big shoot-out, and that should never happen. Oh, and the 3-D seemed like an afterthought, but that’s so common these days it’s almost not worth mentioning. If you do see it, though, keep an eye out for some quick homages to the 1960’s TV series, the Lone Ranger (originally the Green Hornet’s great-uncle, but not here), and of course, Dasani bottled water. Ah, product placement.