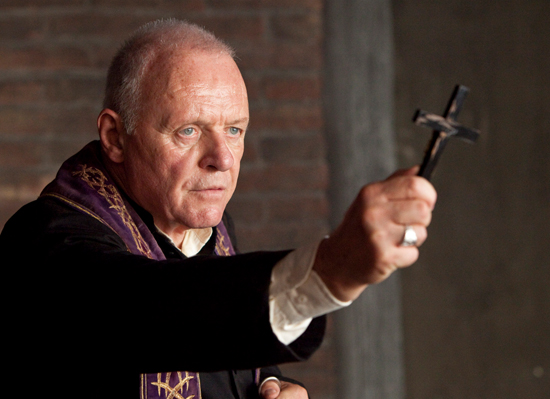 There’s a scene where Father Xavier (Ciarán Hinds, Amazing Grace, also soon to be Aberforth Dumbledore in the next Harry Potter flick), while talking to reluctant student Michael Kovak (Colin O’Donoghue), asks him what he thinks of the exorcism class. Now that’s not a question you hear every day. Michael’s reply is that he doesn’t know what to make of it. I mention this because I don’t know what to make of the movie, either.

There’s a scene where Father Xavier (Ciarán Hinds, Amazing Grace, also soon to be Aberforth Dumbledore in the next Harry Potter flick), while talking to reluctant student Michael Kovak (Colin O’Donoghue), asks him what he thinks of the exorcism class. Now that’s not a question you hear every day. Michael’s reply is that he doesn’t know what to make of it. I mention this because I don’t know what to make of the movie, either.

Reluctant student Michael is studying to be a priest because he doesn’t want to be a mortician. Apparently dad Istvan (Rutger Hauer, Batman Begins) disapproves of any other career path. Istvan is a Hungarian name, and so is Kovak, even though Rutger Hauer is Dutch. The character says something in Hungarian, at least I think he does. I haven’t learned the word for flower yet, but the rest sounded sort of like Hungarian. I need to study harder.

Anyway, since it’s four years of college before you have to take any final vows, Michael decides to pretend he wants to be a priest for a while so he doesn’t have to deal with dead bodies any more. But when he tries to duck out, Father Matthew (Toby Jones, Frost/Nixon) offers a counter-proposal. The Vatican needs exorcists, he says, and he thinks Michael would be good at that since he must not be squeamish. Besides, it’s two months in Rome on the church’s dime.

The teacher, the aforementioned Father Xavier, senses Michael’s reluctance. He sends him to meet his old friend Father Lucas (Anthony Hopkins, The Wolfman), whose methods of exorcism are a little less conventional. I’m not sure why he thinks that would be more convincing, but then, this is Anthony Hopkins we’re talking about. He’s more convincing by definition. Father Lucas obliges by setting up an exorcism for Michael to witness. A pregnant teenage girl, Rosaria (Marta Gastini), is prone to writhing around, stretching her neck at painfully odd angles, and trying to scratch a piece of her scalp off. She also suddenly starts speaking English when Michael is around, and “knows the unknowable,” which Father Lucas describes as the surest test to decide whether someone is in need of a priest or a psychiatrist.

Father Lucas, by the way, is Welsh, just like Sir Anthony. When Michael appears, people keep calling him “the American,” even though the actor was born in Ireland. They don’t say what nationality Alice Braga’s character, Angeline, is supposed to be, but the actress is Portuguese. She speaks Portuguese, Spanish, and English in real life, but here she speaks Italian so maybe she’s supposed to be Italian. The point is, she’s a reporter taking the class as part of an article. This is almost part of the true story the film is very, very loosely based on — journalist Matt Baglio did much the same thing, and that’s where he met Father Gary and eventually decided to write the book the movie is sort of, kind of based on, The Rite: The Making of a Modern Exorcist.

This, I think, is where the movie went wrong. It tries to be both a creepy horror movie and a semi-documentary, and you can’t do that with this material, apparently. Father Gary said it was very accurate in its depictions of exorcisms, with some “expected licenses” taken — that would be things like the freaky almost-glowing eyes, and weird vein-like patterns on the skin, I imagine — so the Catholic bishops liked that part, but not the horror movie angle. Horror movie fans will enjoy the spooky voices, hallucinations, and the like, but not the accurate exorcism parts, I’m thinking. So basically, no one’s completely happy and Sir Anthony is wasted in the part. I mean, he was his usual great self, don’t get me wrong; but there’s only so much even he can do to make a bad script good.

Two and three-quarters out of five is as high as I can go. The three-quarters is all Sir Anthony’s, because he’s so wonderfully disconcerting when he leaps from furiously accusing a mother of beating her child to saying, “Okay,” and beaming in grandfatherly fashion. The rest is just sort of a mess. There’s some business with a charm bracelet they never really explain, and exorcisms are supposed to take months but sometimes take half an hour, and they never really explain that either. The exorcisms may have been accurate, but mostly what I learned from the film is that it’s hard to make a mule scary.