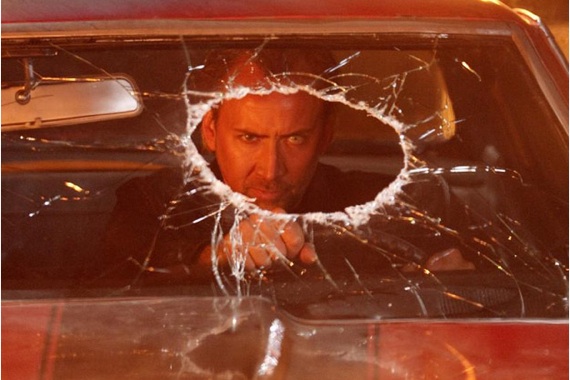 I sort of feel like I just watched Machete again. It was another movie that seems to have set out to be really bad in the hopes of turning out really good. It was less bloody, had slightly more plot, and Nicolas Cage is far less ugly than Danny Trejo, but it still seemed a lot like watching Machete. This was Machete Light, I guess.

I sort of feel like I just watched Machete again. It was another movie that seems to have set out to be really bad in the hopes of turning out really good. It was less bloody, had slightly more plot, and Nicolas Cage is far less ugly than Danny Trejo, but it still seemed a lot like watching Machete. This was Machete Light, I guess.

Nic Cage is John Milton. No, not that John Milton. This John Milton was a petty criminal who got in over his head, got himself shot, and got sent to prison. I mean to Hell. Now, Hell has got to be a pretty high-security place, but apparently people can still get out if they’re determined enough. And there’s got to be a certain urgency in escaping from Hell, since it is, well, hellish.

They don’t get into the hows of escaping from Hell, though, which is kind of a shame. If they’d had more of that, then there would have been less of that awful cultist stuff. But let me back up a little. Milton had a daughter, who also had a daughter. Baby granddaughter — she doesn’t seem to have a name — has been kidnapped by cult leader Jonah King (Billy Burke, Untraceable), because he needs a sacrifice at the next full moon.

It’s a weird sort of cult. They say they’re Satanists, and use a weird variation of a pentagram as a symbol, but the members are a really odd mix. Some of them seem to get drunk or possibly high and dance naked before bonfires, while others dress like excessively modest librarians and look like they’d be shocked at the prospect of so much as sipping from a glass of wine. Most of them, however, just wear very bad wigs and like guns. Jonah’s hairpiece is slightly less frightening than most, but he’s also not as good a shot, apparently.

Anyway, the entire cult storyline is horrible. The good part is the guy chasing Milton; and to a lesser extent, the girl helping Milton. The pursuer is William Fichtner (Date Night) in a three-piece suit, aka The Accountant. He’s creepy. He knows when you’re going to die, can track Milton by scent, and gets shot and barely notices. But he’s also strangely funny when he’s ruthlessly tormenting people. More than once he got the audience to laugh and then feel terribly guilty for doing so. It happened to me, I admit.

Piper’s part of the story was also a lot better than expected. Piper is Amber Heard (Zombieland), a waitress who loses her job and her boyfriend almost simultaneously, though neither is much of a loss. She does have a nifty old muscle car sort of vehicle, though, a 1969 Dodge Charger 440. I think that’s right. Despite Gran Torino, I’m still not much good at identifying cars. But Milton knows what it is, and likes it, and finagles his way into getting a lift from Piper in said car. Then, of course, she just gets pulled deeper and deeper into the whole mess.

She’s not quite the stereotypical small-town waitress, though, which is what saves the character. She does occasionally get nabbed and held at gun- or knife-point, but she doesn’t lapse into being just a damsel in distress. People threaten her, and she threatens them right back, or just kicks them, as appropriate. She has near-perfect hair, though it doesn’t look like a wig, and she wields a mean shotgun. Like, literally.

So it was basically a bunch of good characters thrown into a bad story. It was never quite as over-the-top, insanely improbable as Machete was, and maybe that’s also where they went wrong. Okay, the scene with Milton and Candy (Charlotte Ross), one of the many beautiful women who hit on him, comes very close, but that’s about it. Sometimes it wavered on the edge of goodness, but it always ended up tipping back towards Hell. I mean, badness.

Two and three-quarters out of five. I just cringed at the flashback stuff explaining how baby granddaughter got mixed up in all this, and flinched a little every time Jonah and his soul patch appeared on screen, but aside from that, it came very close to true campy enjoyableness, even though it never quite made it. Still, it was a valiant effort. And Nic Cage is still awfully spry, especially for a dead guy.