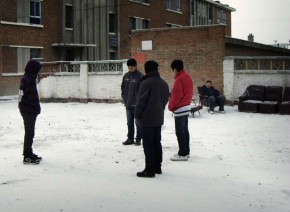 First of all, a special shout-out to the Orphan Film Symposium — they showed a collection of “orphan” short films at the festival, including some rare Wisconsin-based gems. Orphan films, as the name implies, are forgotten films, those whose creators have died, perhaps, or films whose copyrights were held by companies now out of business or otherwise uninterested.

First of all, a special shout-out to the Orphan Film Symposium — they showed a collection of “orphan” short films at the festival, including some rare Wisconsin-based gems. Orphan films, as the name implies, are forgotten films, those whose creators have died, perhaps, or films whose copyrights were held by companies now out of business or otherwise uninterested. Thanks to government grants and corporate sponsors, such films are gradually being restored and preserved, mainly at universities such as New York University, for future generations to enjoy. A standing ovation for all their hard work!

If that actually excited you, though, it’s time to calm down — way down — so I can tell you about this first feature-length film. It’s called Winter Vacation, or Han jia, or 寒假, if your computer can handle the Mandarin. It would be deeply wrong to be excited while thinking about this film.

If you know Waiting for Godot, this movie might make you think of that. The crew from Godot is actually better off than the teenagers here, though, frighteningly enough. This bunch doesn’t even know what they’re waiting for. They just know that it’s their winter vacation, and they don’t want to go back to school.

The action — such as it is — revolves around Zhou Zhixin’s home, where he lives with his father, his older brother and sister-in-law, and his little nephew Zhou Zhangxin. “You’re the most pitiful kid I know,” his playmate tells him, and she’s pretty much right. His grandfather scolds him to be calm — “or your uncle will kick your butt” — when he’s just sitting there, looking half-asleep from boredom because he isn’t allowed outside to play.

Not that there’s much to do outside, either. One angry kid has made such a habit of bullying another kid for money that it looks more like a weird game they’ve concocted than extortion. The whole group of boys hangs around discussing the possibility of walking through the vegetable market because there’s a girl there who might be cute. “She’s just ordinary-looking,” one boy says, to which the boy who originally suggested the idea replies, “But she’s a stranger!” Which is a big deal around there. Oh, and Laowu’s girlfriend has just broken up with him, but even that doesn’t count as an event, since she breaks up with him about once a month or so.

Hardly anything happens, and yet it was funny. I found myself leaning forward very slightly once or twice, trying to help the characters on the screen say something, since it was hard to take the silence anymore. It didn’t even seem like 90 minutes long, which it was (91 to be precise), so writer/director Hongqi Li must have done something right. I even laughed, though it was sometimes kind of a toss-up between that and feeling horribly depressed, so your mileage may vary. Three and a half out of five. Caution: May cause lethargy.