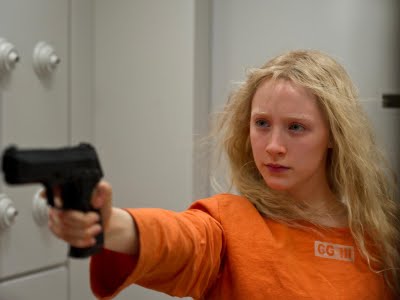 Once upon a time, a little girl lived with her father way up north, in a cabin hidden away deep in the woods. Sounds nice, doesn’t it? Don’t let it fool you. Sure, dad Erik Heller (Eric Bana, Nero from Star Trek) teaches little girl Hanna (Saoirse Ronan, Atonement) everything she needs to know to survive in their chilly refuge.

Once upon a time, a little girl lived with her father way up north, in a cabin hidden away deep in the woods. Sounds nice, doesn’t it? Don’t let it fool you. Sure, dad Erik Heller (Eric Bana, Nero from Star Trek) teaches little girl Hanna (Saoirse Ronan, Atonement) everything she needs to know to survive in their chilly refuge. He even reads to her at night from what seems to be some sort of general kids’ encyclopedia covering everything from music (a collection of sounds arranged with an eye to beauty and expression of emotion) to how much a blue whale’s tongue weighs (about 2.7 tons). But considering that they also seem to spend large portions of their days beating up on each other, the phrase “dysfunctional family” doesn’t quite seem to cover the situation.

One day, when she’s about sixteen, Hanna says she’s ready. This readiness apparently involves sending out a signal that will be picked up by one Marissa Wiegler (Cate Blanchett, Marion Loxley of Robin Hood). I don’t know what she does for a living, exactly, but it involves other people dying, and also lots of file folders marked top secret. She and dad Erik go way back, and she’s not exactly pleased to hear from him again.

Hanna gets arrested, but this is apparently all part of the plan. They lock her up in a government facility of some kind — I really couldn’t tell you what it was, but it certainly wasn’t a jail. It had lots of giant vents, ramps to slide down, and weird little corners to make it easier for escaping prisoners to hide from their pursuers. It was apparently in Morocco, or at least that’s where Hanna is by the time she finds some signs of civilization.

She meets her first “normal” family in Rachel (Olivia Williams, Dr. Moira MacTaggart from X-Men: The Last Stand) and Sebastian (Jason Flemyng, Acrisius from Clash of the Titans) and their two kids, Sophie (Jessica Barden) and Miles (Aldo Maland). They’re driving around in a camper/van sort of thing, and Sophie, who’s roughly Hanna’s age, is fascinated by her mysterious new friend who won’t tell her anything about herself except for a cover story dad Erik concocted. He didn’t bother teaching her how to say it normally, though, so it isn’t a very good cover story overall. Actually, he didn’t bother teaching her how to do anything normally, now that I think about it.

Anyway, Marissa sends the official troops after Erik, while recruiting some more under the table help in tracking down Hanna from Isaacs (Tom Hollander, Pirates of the Caribbean) and his goons. Isaacs runs a nightclub when he isn’t hunting down random stray girls, and he whistles the same tune all the time. I know why he keeps whistling it, too. It’s because after you’ve heard it just once, it worms its way into your head, sinks its tiny claws in, and won’t let go. Ever. Consider yourself warned.

Much mayhem and death ensues, of course, all to the strains of music by The Chemical Brothers. If they’re to blame for That Tune — and apparently they are; it seems to be from their song called “The Devil is in the Beats” — then I need to have words with them. It’s a good thriller. I liked Hanna. She flips out at the sight of airplanes, is fascinated by electric lights, and is generally a freak, as Sophie puts it. But she’s also, somehow, a nice kid in just a little out of her depth and struggling to keep herself alive.

Unfortunately, Marissa is just the antagonist. Cate Blanchett acts up a storm, but the character is too much of a mystery. She owns lots of shoes and is obsessed with dental hygiene, but I couldn’t really tell you anything else about her, and that’s a shame. But in spite of that, I still caught myself rooting for her more than once. Maybe that’s because I didn’t like dad Erik. I don’t know if he wasn’t trying, or if he wasn’t right for the part, but I just found him vaguely annoying most of the time.

So I have to subtract a quarter idol for him and the ending, but that’s still a solid three and three-quarters out of five. I mean, the ending was good, but as they were leading up to it, I suddenly realized exactly what was going to happen — I mean just about down to the last detail — and that wrecked it a little for me. I’m tempted to subtract something for That Tune, too, but I’ll reiterate my earlier earworm alert instead. I left the theatre hours ago, and I still can’t shake it. Arrgh.