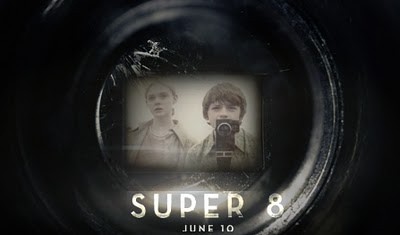 One of my coworkers asked me, as he often does on Fridays, what the movie was for this weekend. “Super 8,” I replied. He gave me an odd look and said, “That’s a motel.” It’s also, I explained, an old type of little movie camera made for amateur use, ‘little’ being entirely relative. And now, it’s also a J.J. Abrams/Spielberg flick.

One of my coworkers asked me, as he often does on Fridays, what the movie was for this weekend. “Super 8,” I replied. He gave me an odd look and said, “That’s a motel.” It’s also, I explained, an old type of little movie camera made for amateur use, ‘little’ being entirely relative. And now, it’s also a J.J. Abrams/Spielberg flick.

Now, I think maybe I saw a very short teaser trailer for this a while back, with the door of a train car flying off while a startled kid watched, but that was it for publicity. It’s because they wanted to keep the exact subject matter as secret as possible, though it’s pretty easy to guess the general theme. It’s set in Ohio, in June 1979, and revolves around a bunch of kids — all right, a bunch of A/V geeks, basically — and their quest to make a movie for a Super 8 competition. Charles (Riley Griffiths) is the kid running the show, and I’d list prior credits for him, except there aren’t any. You won’t notice, though. I mean, you won’t be sitting there wishing they’d found a kid who could act, because he can. He talks a lot about needing production values, though sometimes I’m not sure he really knows what that means.

His best friend (in charge of makeup, sound, and special effects) is Joe Lamb (Joel Courtney, who also doesn’t have any previous credits). He’s known, not always affectionately, as ‘the deputy’s kid’. The deputy in question, Jackson Lamb (Kyle Chandler, The Day the Earth Stood Still), has been raising Joe alone since Joe’s mother was killed in what sounds like a truly gruesome accident at the local steel mill. Wouldn’t you hate to be the guy whose job it is to change the ‘784 days without an accident’ sign back down to one day? But though Jack is, according to Charles’ dad, a stand-up guy, he’s not really making it as a dad. Joe is left to roam mostly on his own while Jack throws himself into his work.

Joe throws himself into movie-making, and making models, and making make-up. I mean, doing the monster make-up for the flick, which is about a zombie infestation and the brave Detective Hathaway who fights it. Hathaway is played by Martin, who’s played by Gabriel Basso, who actually has a few TV credits, like The Big C. The various zombies are played by Cary (Ryan Lee, who’s been in a bunch of short films), who likes to blow things up. I mean, this kid is alarmingly fascinated by fire. There were two brothers at my high school who liked to do that, and the elder is now gainfully employed by the Hollywood pyrotechnics industry, so if you can keep it under control, there’s a future in it.

Anyway, in the quest for production values (and storyline), Charles decides to give Hathaway a wife. He asks the pretty Alice Dainard (Elle Fanning, The Curious Case of Benjamin Button) to play the wife and, shockingly, she agrees. The actress is only 13 but she looks older, and I think she’s supposed to be 15 here, since the other kids all seem to be about that age. Actually, it maybe isn’t so shocking that she agrees, since I think her dad, Louis (Ron Eldard, House of Sand and Fog), doesn’t like it when she leaves the house or talks to people.

The kids are filming a scene at a railway station, where Mrs. Hathaway talks about how worried she is for her husband, who’s trying to send her to Mackinac Island so she’ll be safe. That’s pronounced Mackinaw — they have it right in the film, but I know the spelling is confusing. A long freight train goes thundering past, and rather than give up on filming because of the noise, Charles screams “Production value!” and they record frantically.

Until now, it’s been a nice little coming of age sort of flick. Then the train derails, the kids are fleeing lest they be flattened by a flying boxcar before they have a chance to come of age, the military shows up, and things get weird.

Here’s where I have to be careful not to give anything away, since I really liked discovering it all along with the characters. The conscientious Jack doesn’t like getting the runaround from the Air Force, led by Noah Emmerich of The Truman Show as a guy named Nelec. That almost looks like an anagram, but I can’t make it into anything useful. Anyway, Jack won’t accept the pat reassurances of the military, and neither will Joe, when the pretty Alice ends up in danger.

It only starts as a coming of age flick, that’s the point. Somewhere along the way, you suddenly realize that you’re watching a coming of age sci-fi action adventure film with a little humor thrown in to make the scary moments scarier. “Drugs are so bad!” wails the hapless Martin at one point, in between bouts of hysteria and nausea, and I admit it, I giggled.

But do NOT, at any cost, leave before you see the movie within the movie, which rolls during the end credits. Not even if your car’s on fire. I’m serious. The main movie is worth four and a half out of five, easy, because it was so much fun despite the occasional little plot hole; but the movie the kids have created, “The Case”, almost bumps it up to a perfect five out of five. Watch especially for a shout-out to classic zombie movie creator George Romero. Just do not join the group that’s already wailing on the imdb message boards about having bolted for the door and missed all that extra fun.