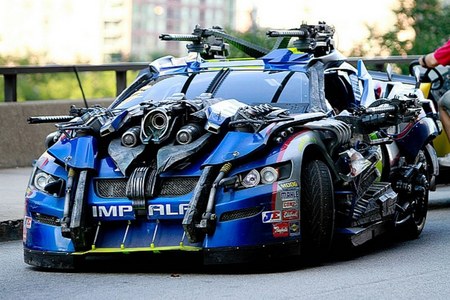 In 1984, Hasbro created the Transformers toy line, based on a Japanese line of toys, and it was good. I mean, it must have been, since they still make them. There are conventions in their honor and video games about them. They’ve even been turned into a couple of TV shows and several major motion pictures. They can transform into anything!

In 1984, Hasbro created the Transformers toy line, based on a Japanese line of toys, and it was good. I mean, it must have been, since they still make them. There are conventions in their honor and video games about them. They’ve even been turned into a couple of TV shows and several major motion pictures. They can transform into anything!

Including money, apparently, since this was a huge debut. I’m not sure I get the attraction, myself, but then, I could say that about nearly any Michael Bay movie. His is one of the few directors’ names that I actually know, and that’s only because I never seem to like his stuff. Two words: Pearl Harbor. Now that was a disaster, in more ways than one.

Anyway, since the first two no doubt made tons of cash, a third was inevitable. They had great publicity, thanks to that recent lunar eclipse they sponsored. Well, okay, they sponsored the live video feed online, not the eclipse itself. But that was quite the coup — even Disney doesn’t often get to tie their movies in with a celestial event. Actually, that’s a good thing, because now I have terrible visions of comets and meteor showers brought to us by Disney. Horrible.

*ahem* Sorry. Shia LeBeouf, of Wall Street: Money Never Sleeps, is back as the main character, Sam Witwicky. Well, he’s the main character aside from all the special effects, at least. He’s graduated from college, apparently on the government’s dime, and is now living a wretched life of unemployment, neglected and unloved.

No, wait, never mind that. He is unemployed, but he’s actually living with a gorgeous supermodel named Carly who thinks he’s wonderful even when he’s throwing temper tantrums. I don’t know if he did that in the first two movies, but he does it a lot here. He whines about how unfair it is that he doesn’t have a job when he’s saved the world twice, darn it, and it isn’t fair that he has to go on interviews like a regular person when he has a medal from the president. When a guard, in the course of doing his job, tells Sam that he can’t get in to see Optimus, he pitches a fit that would do a three-year-old proud.

Inexplicably, one of these fits convinces John Malkovich of Red to give him a job. I don’t remember John Malkovich’s character’s name because, well, the character does absolutely nothing else, except show up and drool briefly over one of the Transformers because they’re just so cool. I can only presume that the rest of his scenes hit the cutting room floor, though considering the movie runs a bit over two and a half hours, they probably should have cut more.

Oh, the plot. There isn’t much. An Autobot ship crashed on the dark side of the moon back in the sixties. We knew about it, and thus the space race was born. There’s a gadget on that ship that could have saved the entire world of Cybertron — and still might, in a way — and both Autobots and Decepticons alike want it. Spock invented it. Actually, it’s just that Leonard Nimoy does the voice of Sentinel, a new Autobot, who invented it. A new old Autobot, I mean. They sort of retconned him in.

Tyrese Gibson from Legion is back as Epps and John Turturro of The Taking of Pelham 123 is back as Simmons. He was fun, I liked him. There’s also Patrick Dempsey from Enchanted as the supermodel’s boss — the character isn’t a supermodel, just the actress, Rosie Huntington-Whiteley — and Frances McDormand of Burn After Reading. She’s fun, too, because she’s so mean to everyone. She’s the National Intelligence Director or something, who you don’t want to mess with, so no one has the nerve to tell her not to be mean.

A lot of things get blown up, like a good chunk of downtown Chicago. The supermodel, thankfully, does not turn into a classic damsel in distress, so that was good. On the down side, there’s not a whole lot of plot, most of the jokes weren’t very funny, I wanted to smack Sam several times, and the entire concept of “product placement” is taken to new heights. Or maybe depths. Two and three-quarters out of five. If you were (or are) really into the Transformers, then you’re all set, but that’s kind of a niche market. I suspect that the only reason it did as well as it did at the box office is because all the people like me who avoided the debacle of the films released last week just really needed a movie fix.