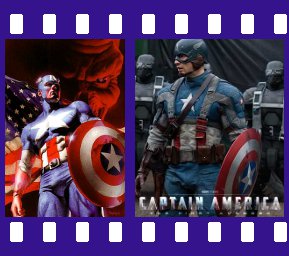 By some strange coincidence, Captain America looks exactly like the Human Torch. I’m making fun of Marvel just a little — they’d promised a while back that they would have complete continuity among all their movies, probably in preparation for all the Avengers tie-ins, so it amuses me that they cast the same actor as two utterly different major Marvel characters. I have no idea how they’ll explain the coming debacle that is The Amazing Spider-Man. They showed previews, and the entire audience looked vaguely uncomfortable and/or confused. I know I was.

By some strange coincidence, Captain America looks exactly like the Human Torch. I’m making fun of Marvel just a little — they’d promised a while back that they would have complete continuity among all their movies, probably in preparation for all the Avengers tie-ins, so it amuses me that they cast the same actor as two utterly different major Marvel characters. I have no idea how they’ll explain the coming debacle that is The Amazing Spider-Man. They showed previews, and the entire audience looked vaguely uncomfortable and/or confused. I know I was. It looks totally and utterly wrong.

But back to happier subjects. Chris Evans was also in The Losers, which was a Vertigo/DC production, so he clearly likes the comic book movies. This makes seven altogether. And I have to admit he makes a really good Steve Rogers as well as a good Captain America. Sometimes, as in Black Swan, it’s hard to play both sides of the same coin, but he pulls it off.

Steve Rogers is a kid from Brooklyn who looks like the 98-pound weakling who gets sand kicked in his face at the beach all the time. They did a great job making him look skinny, by the way, which was all done through visual effects, not a body double like you might expect. He’s the last guy who would be fit to join the Army, but his father died fighting World War I, his mother was killed while working as a military nurse, and he wants to fight, too. His best friend, James “Bucky” Barnes (played by Sebastian Stan who was in the aforementioned Black Swan), gets in with no problem; but Steve tries to enlist five times and is turned down cold each time.

Enter Stanley Tucci as Dr. Abraham Erskine. He’s a scientist who was forced to flee his native Germany when the Nazis wanted to misuse his invention, the Super Soldier Serum. Realizing Steve’s stubbornness — to put it mildly — he gets him a spot at a top-secret training camp, designed to find the first test subject for the serum, and Erskine thinks Steve is it. In one of the best backhanded compliments ever, Erskine points out that making a powerful man more powerful isn’t really what he wants to do. A weak man given power, however, will respect that power, because he knows what it’s like to be on the wrong end of it. Erskine is great, by the way.

Tommy Lee Jones, soon to be Agent K once more in Men in Black III, is Colonel Chester Phillips here, and he thinks Erskine’s crazy, but is forced to go along. Hayley Atwell, as Agent Peggy Carter, also seems doubtful, but quickly learns to respect Steve’s inner strength. She has a lot of trouble with being judged by appearances too, of course, given that most men in the forties probably assume she’s someone’s secretary.

But just after the procedure on Steve is finished, disaster strikes, in the form of a German spy, and suddenly the Super Soldier program is at a standstill. No one quite knows what to do with one super-soldier instead of an army’s worth, so Steve is at loose ends until more disaster strikes. Bucky’s unit is missing behind enemy lines, presumed dead, and no rescue mission is planned. So Steve makes his own.

This is when Hugo Weaving figures out something’s up, and believe me, you don’t want him looking at you too hard. He’s such a good villain. Here, he’s Johann Schmidt, the head of Hydra, which is the Marvel version of Hitler’s weird science group. He has lots of soldiers who are all more loyal to him than to Hitler. They salute him with both fists raised and a shout of, “Hail, Hydra!” It has to be hail rather than the German heil, since “Heil, Hydra!” almost sounds like a stutter.

Johann Schmidt, for those of you who aren’t Captain America fans, is also the Red Skull, Cap’s arch-nemesis. He has in his employ a pet physicist named Dr. Arnim Zola, played by Toby Jones of The Rite. Remember, Marvel physicists are terrifying creatures who can make nearly anything. In this case, he seems to have invented not only a disintegrator ray and the stealth bomber, but also some sort of early version of the Batmobile.

The Allies also have a pet physicist, however, and he’s a doozy. Played by Dominic Cooper, he’s none other than Howard Stark, Tony’s dad, looking more like Howard Hughes than Leonardo DiCaprio ever could. He flies planes into heavy antiaircraft fire, builds anti-gravity cars (sort of), and best of all, makes Cap’s ever-present shield. They even throw in the team that Nick Fury and Captain America worked with in the comics, a mismatched group of soldiers from several Allied countries, called the Howling Commandos. Well, they’re called that in the comics, not here.

So the Red Skull has a nefarious plot to blow up half the world and take over the rest; bizarre, futuristic weaponry abounds; and Captain America becomes Captain America. What more could you ask for? There are plenty of explosions, too, in case you’re wondering. The whole thing has a nice retro feel, despite the occasionally jarringly modern-looking scientific gizmo. Obviously it’s the more sanitized version of WWII — it’s more like an updated propaganda movie from the forties than Saving Private Ryan — but they do a decent job of capturing some of the feel of the times. And I had fun watching it. Four seems a little high — it could have used a little tighter editing in places, and I seem to be saying that a lot these days — but three and three-quarters seems too low. Three and seven-eighths. I know, it’s a weird number, but work with me.

Does anyone still need a reminder to stay through the credits? A good third of the audience did this time, so people are learning. There’s an entire teaser trailer at the end, so leave early at your own peril. I have to admit, the Avengers looks good. Cross your fingers that they can actually pull this off.