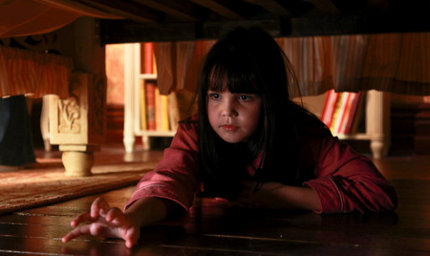 Once upon a time, a little girl was sent on a long journey to live with her father and her stepmother in a castle in a tiny kingdom called Rhode Island. That isn’t quite right, since it’s just a really big house, and her father isn’t actually married to the new lady in his life, but this is, in the end, a fairy tale, all right.

Once upon a time, a little girl was sent on a long journey to live with her father and her stepmother in a castle in a tiny kingdom called Rhode Island. That isn’t quite right, since it’s just a really big house, and her father isn’t actually married to the new lady in his life, but this is, in the end, a fairy tale, all right.

Bailee Madison from the movie Brothers is the little girl, Sally. Dad is Guy Pearce from The Kings’ Speech, here playing Alex. And Kim, who feels like an evil stepmother even if she isn’t one, technically, is Katie Holmes from Batman Begins. This is another one of those flicks with a very short cast list; I’ll mention just about everyone by the end. Sally’s mom is a flake who thinks that all problems can be solved by the right pharmaceutical. When Sally seems determined to prove her wrong by not getting better on Adderall, Sally’s mom fakes her out by sending her on a visit to her dad and not telling her it’s actually for good. Nice, huh?

Now, we the viewers already know that something is hugely amiss in that house, but of the characters on screen, only Sally seems to get a hint of something strange in the air. It looks like an ordinary house — well, an ordinary huge house that only the very rich could afford — but the smell of money can’t quite disguise the whiff of something wrong. The characters aren’t particularly rich, by the way; Alex is an architect (I think) and Kim is an interior designer, and they’re hoping to restore the house to its former glory and get on the cover of Architectural Digest before selling the place to some rich person.

Then Sally discovers a basement where there shouldn’t be one. She’s a terrifying child, by the way. Not in any supernatural way, but just because she’s fearless in a way that no eleven-year-old should be. Well, the actress is eleven; I don’t know how old the character’s meant to be. But while I realize that I was a timid child, this kid is way off in the other direction. She marches alone into dark cellars without a qualm, fearlessly takes a bath in a desolate part of the house, and sticks her head into dark tunnels with no hesitation — even after she knows perfectly well that there’s something around trying to eat her. Quite a lot of somethings, actually. If you ever hear a chorus of little whispering things that you can’t see insisting that they want to be your friend, by the way, don’t believe them.

Anyway, the fearless girl finds a cellar, and this worries handyman Mr. Harris. He’s played by Jack Thompson from Australia. In two ways, actually — he’s from Australia and was in the movie Australia. Like Guy Pearce, however, he just sounds American here. Despite Mr. Harris’ best attempts to distract them, Alex breaks into the sealed cellar while Sally watches, enraptured. Because, you know, she likes to be terrified. Did I mention she has no fear of sticking her head into a dark, mysterious opening and picking up a handful of human teeth?

At one point, Sally is talking to a psychiatrist played by Nicholas Bell — naturally, because once weird things start to happen, who else would be blamed but the kid who’s already taking psychopharmaceuticals? Anyway, he asks her what the little things she sees are, and she says they’re fairies. “The bad kind,” the psychiatrist suggests, and she nods. But the thing is, fairies used to be nothing but bad, or at least beyond any real human understanding and therefore creepy. And that’s what we’re up against here. You know what the somethings want — believe me, you know — but exactly what they are, or what they do to people, or why they’re hanging out underneath that particular house are all mysterious. Like in the fairy tales.

There’s a fairy ring early on, and the previous owner of the house quote Arthur Machen extensively, Arthur being a Welsh writer of creepy, fairy-tale-like fiction. The housekeeper, played by Julia Blake of X-Men Origins: Wolverine, is named Mrs. Underhill, a reference to one of the traditional homes of the fairy folk. It’s just a really, really creepy fairy tale all around, and it works.

I’d love to rate it four and a half out of five, but I can’t quite do that. There’s some of the usual horror movie stuff, of course, like the whole question of why people traipse around in the dark, alone, in bare feet, or all three even when they’re pretty sure there’s really bad stuff happening, but I was prepared to forgive that. The real problem is that there were too many details that were skipped towards the end of the film, either forgotten or edited out, and some of them were kind of important.

Overall, though, I liked it. I was scared but not too terrified, wanted to find out what would happen next, and I never once cringed because the bulk of the film rested on the back of an eleven-year-old, which is always a pleasant — if rare — surprise. But no matter how reassuring the title tries to be, you should be like me and believe the runes carved over the deep, dark ash pit in the creepy, mysterious cellar instead. They say, “Be Afraid”.