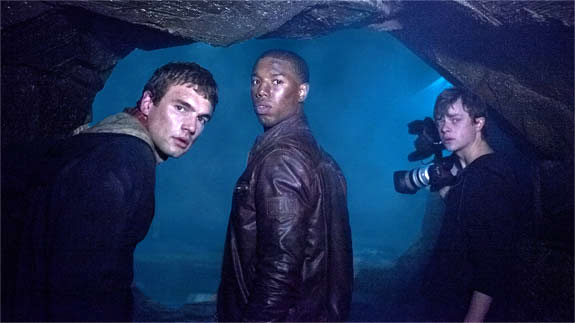 I feel a little like I just watched Super 8 again, even down to the fact that I knew almost nothing about this movie going in. Also as with Super 8, I suspect it’s better to know as little as possible going in, since that way you can discover things right along with the characters. It doesn’t quite make for an even playing field, of course, since the audience knows way before they do that they’re going to end up in deep, deep trouble, but I still think it’s more fun that way.

I feel a little like I just watched Super 8 again, even down to the fact that I knew almost nothing about this movie going in. Also as with Super 8, I suspect it’s better to know as little as possible going in, since that way you can discover things right along with the characters. It doesn’t quite make for an even playing field, of course, since the audience knows way before they do that they’re going to end up in deep, deep trouble, but I still think it’s more fun that way.

Unfortunately, it’s one of those “found footage” movies, which can be tricky to do well. It works fine here for the most part, but there are a few scenes where the excuse for the presence of a running camera is something of a stretch, and also a couple of scenes where they couldn’t think of any excuse for a camera at all and had to film it the regular way and hope no one notices. Also, given where at least two of the three main cameras used ended up, no one should have been able to find this footage. On the plus side, it isn’t nausea-inducing like some such films.

Also like that other movie I keep mentioning, the odds are you won’t recognize a lot of the faces, which was again a good move, I think. Dane DeHaan, who plays Andrew, was on the TV show In Treatment, while Michael B. Jordan, who plays Steve, was recently in the WWII movie Red Tails. Alex Russell, however, who plays Matt, also one of the three main characters, has nothing much in the way of previous credits, though he does a good job here.

The aforementioned trio all attend the same high school in the Seattle area. Steve is super-popular. Everyone likes him, he has a gorgeous cheerleader girlfriend, and he’s the front-runner for class president. Matt is more a regular kid, reasonably popular and pretty smart, at least about philosophy. He quotes people like Plato and Schopenhauer a lot more than most teenagers would. And then there’s Andrew, Matt’s cousin. He’s the one all the other kids taunt, the guy who eats alone on the bleachers, the one who’s always losing the perpetual struggle that is high school for many people.

Andrew has bought a second hand camera, you see, and has started recording everything as a way to try to hide from everything. You can’t blame him. His mother’s dying and his father is an alcoholic who’s also a mean drunk. The father is one face you might recognize, by the way, though he looks rather different than usual here. He’s played by Michael Kelly, who was in The Adjustment Bureau and also, appropriately enough, Unbreakable. There he plays the ER doctor who so gently and incredulously tells Bruce Willis that he’s the only survivor of that terrible train wreck. He gets a little incredulous here once or twice, but he certainly isn’t gentle.

At a rave, Matt and Steve find “this cool thing”. Since Matt has dragged Andrew along to the party, they further drag Andrew down into a suspicious tunnel to get some footage of “this cool thing” for them. And that’s when everything turns weird.

This is also where I start having to be really careful about not giving away too much. There’s some good foreshadowing, hinting at what will eventually happen to one of the trio, and I don’t want to spoil it. The fact is that the “cool thing” has done something to the boys, and now all three of them can do something that no other human being can. It’s one of the more versatile powers in the spectrum of super-powers, and they do a lot with it — including, of course, some of the things you would guess teenage boys might do with such an ability.

But this is a dark movie, don’t get me wrong. It starts out as a lark, a fun thing to experiment with, but you just know it’s going to turn dark, and it does. To quote Samuel L. Jackson, this next part isn’t going to be like a comic book. Suddenly Matt’s philosophy isn’t just on the page anymore; he’s trying to use it to get through the moral conundrums they now have to face. And it’s a very realistic, slow build to disaster. You know it’s coming, sometimes the characters know it, too, but there’s nothing to be done.

I’ll go four out of five, with the proviso that if you don’t like supers movies, you probably won’t agree with me. It is, as I said, quite realistically handled for the most part, but it’s still a supers movie, just with less flash and no fancy outfits. I do also have an MCND Fun Fact: the actress who plays Monica, who at one point throws herself at Andrew, is the real-life girlfriend of the actor who plays Andrew. Other than that, though it’s a good movie, I hesitate to call it “fun”, exactly. The older man sitting in front of me laughed out loud once, but that was at a wholly inappropriate moment and made me seriously consider changing seats. Otherwise, it’s dark, rainy, depressing, hopeful in a scarily determined sort of way, and apparently something of a sleeper hit. Go, supers movies.