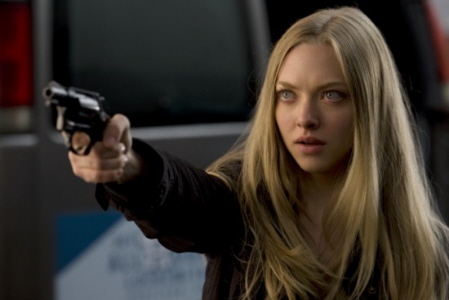 Amanda Seyfried is attractive and all, and she’s a pretty good actress, but I think she needs a different method of choosing scripts. In Time wasn’t all that exciting, Red Riding Hood left a lot to be desired from what I hear, and, well, I don’t like Nicholas Sparks novels, so that sort of lets Dear John out, too, though it was probably better than this flick.

Amanda Seyfried is attractive and all, and she’s a pretty good actress, but I think she needs a different method of choosing scripts. In Time wasn’t all that exciting, Red Riding Hood left a lot to be desired from what I hear, and, well, I don’t like Nicholas Sparks novels, so that sort of lets Dear John out, too, though it was probably better than this flick.

A year ago, Jill (the aforementioned Amanda Seyfried) was chloroformed in her bed, kidnapped and thrown down into a deep dark pit somewhere in the middle of Forest Park. That seemed like a made-up, generic park name to me, but it’s a real place, near Portland, Oregon, where nothing is allowed to be both brightly and fully lit at the same time. You can either have diffuse, grey light as in a very cloudy day or before the sun is quite up, or you can have a bright beam of light shining on just part of whatever you’re trying to look at. It’s the law, I think, or at least that’s how the film makes it seem. It got annoying.

Anyway, Jill escapes this deep dark pit because her captor is one of the least intelligent serial killers ever. He doesn’t leave her to starve, nor does he make her climb out of the hole so he can kill her. No, he climbs down himself, with a desperate woman fighting for her life down at the bottom of the pit waiting for him. Sooner or later he was going to kidnap someone who’d start beating him up while he was still on the rather awkward cloth ladder and unable to defend himself, and in this case, that was Jill. But the police didn’t really believe her story, and didn’t search very hard for the pit, despite her insistence that there were bodies there.

Now Jill works the night shift at a diner with her friend — apparently her only friend — Erica, played by Katherine Moennig of the The Lincoln Lawyer, and drives her sister Molly (Emily Wickersham) crazy by spending her spare time painstakingly searching Forest Park section by section. Then Molly disappears the night before her big econ final, and the suspense starts. Or tries to, at least. You already know the police won’t listen, so no suspense there. They throw in a brand-new homicide detective, Peter Hood, played by Wes Bentley, who acts like he might believe her, but he’s really only there so that someone can explain the background of Jill’s kidnapping to him and therefore the audience. Considering that the last time I reviewed Wes, though, he was in Jonah Hex, at least he’s doing a little better.

For the rest of the film, we follow Jill as she makes up increasingly wild stories to explain why she’s asking total strangers such weird questions. She does all right, though, by which I mean that people do tend to answer her instead of just dismissing her. Her friend Erica has been trying to convince Jill that good things can happen when you’re nice to people, but I’m pretty sure she didn’t mean for Jill to put that into practice while spinning lies about her poor grandmother’s stolen car. I suppose that is the way to make lies sound plausible, though — mentioning grandmothers and little brothers makes you seem more wholesome or something. She doesn’t seem very wholesome when she’s threatening people with the gun that she isn’t supposed to have, but you can’t have everything. She threatens Joel David Moore, for example, who was in Avatar and has come down considerably in the world, at least box-office wise.

Sebastian Stan, who played Bucky in Captain America, is Molly’s boyfriend here. He doesn’t do much, but I just wanted to mention him because of the Captain America thing. No one does much except for Jill, which is somewhat expected since the whole point is that no one believes her, but the serial killer guy doesn’t do much, either, and he should. He should be scary and creepy. Instead he’s nonexistent until the very end of the movie and not the slightest bit intimidating. Probably they wanted the audience to be doubtful about whether or not to believe Jill, too, but face it: the audience will believe her just because she gets top billing. So what we end up with is a little over an hour of general impatience for this serial killer guy to show up and do something already, if he’s so tough, topped off by about ten or fifteen minutes of, “Is this what all the fuss was about? Are they ever going to stop chatting on those wretched cell phones so we can finally have some action again?”

Part of the problem may have been that I don’t find woods all that scary, even at night. The house I grew up in was surrounded by woods, and I roamed through them fearlessly at all hours, so to me there was a lot less suspense in that deep dark forest then the filmmakers intended. However, friends of mine who grew up in cities tend to be pretty alarmed by dark forests, so your mileage may vary. The point is, I’m usually the first to get nervous, and instead I was getting a little bored. Since boredom is definitely not on the list of what the filmmakers were going for — I hope — that means two and three-quarters out of five. On the plus side, I think there might be one swear word and almost zero blood, so it can go straight to Friday night TV with very little editing. But sadly, all gone really refers to is the 94 minutes of my life I spent watching this.