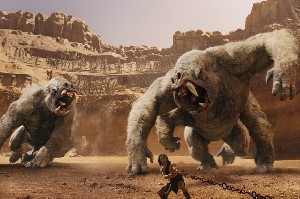 The movie 79 years in the making! That’s usually a very bad sign, of course. As a general rule, the longer a film lingers “in development”, the worse it gets. Apparently it resets after three-quarters of a century or so, though, since this one doesn’t seem to have suffered much.

The movie 79 years in the making! That’s usually a very bad sign, of course. As a general rule, the longer a film lingers “in development”, the worse it gets. Apparently it resets after three-quarters of a century or so, though, since this one doesn’t seem to have suffered much. Also, it’s now a live-action movie whereas it was originally almost an animated feature — almost the very first full-length animated feature, in fact, since it was Robert Clampett of Looney Tunes fame who wanted to option the tale, some six years before the actual first full-length animated feature, Snow White and the Seven Dwarfs, was made.

Almost exactly one hundred years ago, Edgar Rice Burroughs, who created the Tarzan series, published “A Princess of Mars”, the first tale of adventure on Mars (aka Barsoom) and almost accidentally created another influential franchise. It was a pretty wild tale for the times, and he hid behind a pen name at first, afraid he might get laughed at for writing such a thing.

But enough reminiscing. There’s a planet to save!

In 1868, Captain John Carter (Taylor Kitsch), once of the Virginia cavalry, is a typical Civil War veteran, at least typical for the movies. He’s gone west in search of gold, vowing that all he wants is to get rich and live an easy life. Instead, he keeps finding trouble, from Apaches, soldiers, and shopkeepers who want to be paid for some odd reason. Oh, and aliens. An alien tries to stab him and gets shot for his pains, and the next thing our reluctant hero knows, he’s a stranger in a strange land.

Foreshadowing Superman by some 26 years, John discovers that he can leap tall buildings in a single bound. He might be stronger than a locomotive, too, but he doesn’t get the chance to test that since people on Barsoom tend to either fly on solar-powered ships or ride on the backs of these eight-legged vaguely horse-like things. Some of the natives, called Tharks, are ten to twelve feet tall vaguely human-like green guys with four arms and bad attitudes, while others are what they call Red Men, which I think is just a reference to the red tattoo sorts of marks they have on their faces and arms.

The leader of the Tharks is Tars Tarkas, voiced by Willem Dafoe of Daybreakers, and in a sort of Spider-Man reunion, the Sandman (Thomas Haden Church) voices angry malcontent Tal Hajus. The Tharks find John jumping around and seem to think that he’ll make a cool sort of pet.

Meanwhile, there’s this princess who’s also a scientist. The actress is Lynn Collins, who was in X-Men Origins: Wolverine with Taylor Kitsch, and the character is Dejah Thoris, Princess of Helium, and I don’t mean the element. In this case, Helium is the only city-state on Barsoom that hasn’t yet been conquered by the Zodangans under leader Sab Than, played by Dominic West from Hannibal Rising.

It’s really hard to summarize this movie because there’s so much going on. There’s yet another group mixed up in this, called the Therns, or maybe not since their leader (played by Mark Strong from Green Lantern) insists that they don’t exist. They cast illusions so they can look like anyone and keep talking about restoring the balance, though since that seems to involve creating an evil dictator it doesn’t seem very balanced to me.

John doesn’t think it seems balanced, either, and he prefers fair fights, which I think makes everyone else look at him as hopelessly naive. Dejah thinks he’s either a madman or a liar, but he can fight like nobody else and she needs help. I’m glad to say she isn’t a pushover, though, as she swings a mean sword. But Ciarán Hinds of Ghost Rider 2, who plays the Jeddak of Helium — Jeddak being Martian or Barsoomian or whatever for leader — has run out of options. Sab Than says that he’ll spare the city only if Dejah agrees to marry him, and needless to say she’s not thrilled with that plan.

Someone did a good job with the script and probably also the editing, because not once did I find myself wondering when they’d stop talking and get back to some action, or wonder when this action sequence would finally be done already because I’ve had enough swordplay for now, thanks. I’d never seen the two leads in anything before so I wasn’t sure if they could act, but no problems there, either. Dejah is almost a stereotypical fiery, stubborn princess, but she ends up being a lot more than that; and John’s unhappy past is revealed in very dramatic and touching ways. One of my first thoughts on seeing the character was that he was trying too hard to be mean, and as it turned out, that’s exactly what I should have thought.

Between all that and the nice little framing story featuring Daryl Sabara (he was in Machete somewhere) as Edgar Rice Burroughs himself, it was a great and entertaining ride that gets four and a quarter out of five. The quarter is solely for the look of the movie, which is wonderful. There’s a slightly steampunk-ish feel to the technology, other things look vaguely Egyptian, but overall it just has its own really cool look. Someone did a wonderful job on the detail; sometimes you can see this intricate little carving on the hilt of John’s sword, for instance. Now if you’ll excuse me, I need to go play some Martian Rails.