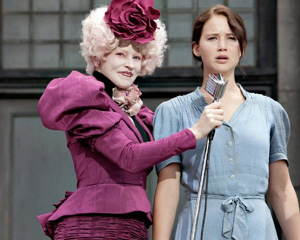 It’s also, however, not too terribly complicated to explain, thankfully, so I’ll throw in a brief synopsis just in case. Seventy-four years ago, the Hunger Games began as a punishment and have now become a spectacle. They’re like the Roman gladiatorial games with the outfits from Cirque du Soleil, basically, though thankfully the contestants don’t have to dress like that while they’re actually fighting for their lives. Anyway, there was a Capital in charge of twelve Districts, and long ago the districts rebelled against the Capital’s rule, which if the Hunger Games are any indication was certainly no surprise.

Now, once a year, each district randomly chooses one boy and one girl between the ages of 12 and 18 to be offered up as tribute, because tribute sounds better than sacrifice. Think Thunderdome, except 24 go in and only one comes out. This year, however, something odd has happened in District 12.

I thought that the districts were in a sort of circle around the capital, but apparently the higher the number the farther away you are and the less likely you are to win. Districts 1 and 2 usually take the honors. My first thought about District 12 was that it consisted mainly of West Virginia coal miners, and it turns out that was exactly right, so good job with the setting and wardrobe there. But when a 12-year-old girl named Primrose is chosen in that district, her 16-year-old sister Katniss (Jennifer Lawrence of X-Men: First Class) volunteers to go in her place, shocking everyone.

Also chosen is Peeta (not Peter like I first thought), played by Josh Hutcherson of Journey to the Center of the Earth, who seems perpetually overwhelmed and torn between forced optimism and the conviction of his imminent death. Woody Harrelson of Zombieland, who plays their adviser Haymitch, encourages the latter particularly. He prefers drinking to working and is at first of highly doubtful help. But gradually, he realizes he might have something in Katniss and actually starts to pay attention. Let me also add here that I’m glad they didn’t try putting any fuschia-colored clothing or gold makeup on him.

He and Effie help the kids make an impression and get sponsors. Effie is played by Elizabeth Banks from Man on a Ledge, but you’d never know that to look at her here. Sponsors aren’t quite what you might think, thankfully; apparently it’s allowed for companies or maybe individuals to send in little jars of food or medicine for their favorites. Nobody has to walk around wearing a Coca-Cola logo on their jacket while struggling to survive in the deep woods.

Katniss is used to struggling to survive, since everyone in District 12 is half-starved. She goes out bow hunting with her friend Gale (Liam Hemsworth, Knowing) because sometimes having a squirrel to chew on is the difference between life and death. She’s a little blunt and socially awkward otherwise, but the jaded audience finds this charming and she becomes a crowd favorite, thanks partly to some lessons from Cinna (Lenny Kravitz). He’s sort of a makeover artist and therapist in one.

Wes Bentley, who was in Gone but proves here that he can act since he didn’t get the chance there, is the suave, self-assured Gamesmaster whose job it is to keep things difficult for the contestants, just in case the fact they have to kill fellow kids to survive isn’t tough enough. He throws in tempting offers of food and medicine so that others can ambush you when you go to get them, plus giant mutant scaly bear-dogs. Like the outfits, much better seen than described, obviously, but they’re creepy.

Stanley Tucci from Captain America plays the polar opposite sort of role here as the painfully flashy play-by-play commentator (assisted there by Toby Jones, also from Captain America) who also interviews the contestants to get touching little stories from them before they’re brutally killed. They don’t show anything terribly bloody, but they’re using swords, arrows, and brute strength and cunning, so you can imagine how nasty it must get. And especially poignant is that another 12-year-old didn’t have anyone to volunteer for her place, the aptly-named Rue from District 11.

Now throw in lots of running, fighting, and shaky-cam, plus a little doubtful loyalty and Young Love as marketed to the masses, and you’ve got 142 entertaining minutes of movie to watch, which gets four and a quarter out of five. The quarter is because the acting was largely a very pleasant surprise; any movie starring mainly people in or just out of their teens is going to be a crap shoot. Just ask anyone who’s ever contemplated or made a movie version of Logan’s Run. There are some doubtful plot points, something I’m not sure can ever be entirely avoided in an action flick like this, but the movie is otherwise so charismatic you really want to forgive them for any flaws, and it isn’t too difficult. Like many comic-based movies, it may not be to everyone’s taste, but I was pleasantly surprised all around, so even if you’re doubtful give it a try. And may the odds be ever in your favor.