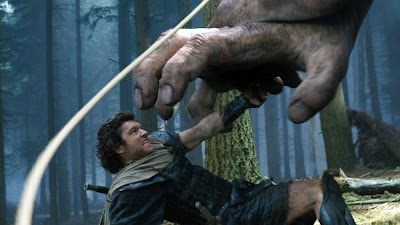 Ancient Greece’s most dysfunctional family is back, and there’s going to be trouble. A few people are back from the Clash of the Titans, namely Liam Neeson, Ralph Fiennes, Danny Huston, and of course Sam Worthington, playing Zeus, Hades, Poseidon, and our hero Perseus respectively.

Ancient Greece’s most dysfunctional family is back, and there’s going to be trouble. A few people are back from the Clash of the Titans, namely Liam Neeson, Ralph Fiennes, Danny Huston, and of course Sam Worthington, playing Zeus, Hades, Poseidon, and our hero Perseus respectively. Somewhat predictably, Gemma Arterton as Io is nowhere to be seen, but don’t fret: the lovely Rosamund Pike, who I last reviewed in Surrogates, is here as Queen Andromeda. She wasn’t Queen Andromeda in the last movie, though, so don’t wrack your memory on that.

There’s also a Titan in this flick, something that Clash strangely lacked. Cronus, once the king of the Titans, has been languishing in Tartarus ever since his kids dethroned him, and he’s tired of it. Luckily for him, the walls of Tartarus are crumbling because no one prays to the gods anymore, so the gods are getting weak, so everything the gods ever made is getting weak. Cronus, however, doesn’t seem to be having any troubles there, so right away I’m confused. The Titans were worshipped before Zeus and company. Presumably they also need the prayers of believers to give them strength, and they’ve been without a lot longer than the younger generations.

However, we’ll skip that problem because it’s the basis for the entire plot, and we just have to run with it. The point is, Cronus barters a deal with Hades whereby Hades gets to keep his immortality in exchange for getting Cronus the power to free himself. Since Hades controls the entire underworld, I’m not sure why he can’t just set Cronus free, but apparently it doesn’t work that way. He isn’t imprisoned quite the way you might think, anyway. It looks like he leaned against a cliff one day and ended up sort of merging with it, since he’s turned into the Titan of Magma or something. He isn’t quite as mindless as the Titans from The Immortals, since he did manage to negotiate, but he certainly acts as mindless.

Anyway, demons are escaping from Tartarus, and since the gods are worn out, the demigods are up. Perseus is busy being a fisherman and single dad to Helius, not to be confused with Helios, who was a Titan and the personification of the sun. Yes, that was an odd name to give his son. Helius is played by John Bell, who will appear in Battleship, also with Liam Neeson, so there’s your MCND trivia for the week. But Perseus gets pulled into the battle, naturally, and ends up going off in search of the Fallen One. To find the Fallen One (who is played by Bill Nighy of Harry Potter), he first has to find Agenor, who is also a demigod, the son of Poseidon. I have to admit I didn’t care for Agenor at first, but he grew on me. He’s played by Toby Kebbell, who was one of the king’s sons in Prince of Persia: Sands of Time. Bill Nighy is wonderful from the beginning, though, and that’s a good thing since he only gets a few scenes.

I haven’t mentioned much plot because there isn’t a whole lot. Basically it’s just that all hell is breaking loose, and the humans are scrambling to cope. Andromeda being a warrior queen, she’s leading the fight against the rampaging creatures, and it isn’t going well. They’re freaky things; they have two heads and six arms and it’s pretty much impossible to sneak up on them since each head faces a different direction. The movie was filmed partly on the Canary Islands, and they have local boy Alejandro Naranjo playing Andromeda’s general, Mantius, which I thought was a nice touch even though it would have been odd for a Greek army to have a Spanish general. Ares is Venezuelan, though; he’s played by Édgar Ramírez from The Bourne Ultimatum.

That brings me to another problem with the plot. Andromeda and Perseus are constantly having to tell the soldiers not to pray to Ares. It’s instinctive for them to pray to the god of war, after all. Ares, therefore, should be doing all right, yet he seems just as nervous about fading away due to lack of worship. And somehow I find it hard to believe that the highly impetuous god of war is actually planning very far ahead.

I’ll forgive that flaw because Bill Nighy was cool and because I liked the labyrinth. It isn’t the labyrinth, but rather a giant trap to help keep people in Tartarus. It rearranges itself like things did in Inception, and as its creator explains, it’s meant to confuse the mind as much as it is to get you physically lost.

Let’s see. Half a point for the labyrinth and half a point for Agenor, plus two-thirds of a point each for Bill Nighy, Sam Worthington, and Rosamund Pike adds up to three out of five. Then minus half a point for sloppy editing, since the film was occasionally choppy and the fight scenes were sometimes confusing, for a grand total of two and a half out of five. Now and then there were scenes that made me think there was hope, but overall it never quite seemed to find its way out of the depths. But at least it didn’t seem to fall into one trap, despite all the others our intrepid heroes manage to set off: no one seemed like they were bored, angry at having been tricked into signing up for a sequel, or otherwise just trying to get through it and get on with their lives.