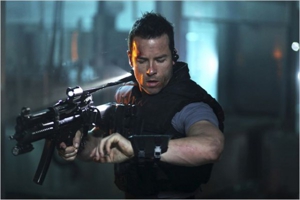 Maggie Grace is Emilie, but don’t worry, it’s just pronounced like Emily. They don’t try to make everyone say it with a French accent. She’s the president’s daughter, which means that when she wants to inspect the world’s newest and most controversial maximum security prison, she gets to do it, even though said prison is in space. It’s 2097, and it makes sense that they’d come up with something like that to house the really violent offenders. The controversial part is that the prisoners all go into stasis for the duration of their sentences, and this stasis sometimes damages the mind severely. They’re not clear on whether this stasis also keeps them from aging, which would potentially be an unexpected perk of a life of crime, though it would also make reintegrating them into society even more difficult than it already is, which is saying a lot.

Anyway, right on cue, something goes wrong. It goes wrong partly because the Secret Service bodyguard protecting Emilie doesn’t know how to listen, and partly because when she asked to interview some of the prisoners, the warden decided it would be fun to let her meet the craziest, most untamed and uncooperative prisoner they had. It’s actually possible that the Secret Service agent also doesn’t know how to read, since he seems oblivious to a large, flashing “Nitrogen Alert” warning later on. This is just a small sample of some of the deeply improbable things that drive the plot.

It’s hard to blame poor Guy Pearce, of Don’t Be Afraid of the Dark. He can act; he was in The King’s Speech and certainly didn’t embarrass himself. Here, though, about all he has to work with is a lot of witty comebacks and snide remarks. Don’t get me wrong, I love snide remarks and witty comebacks, but they do not a character make, and there was only so much he could do. There’s also almost exactly zero chemistry between the leads, which was a little uncomfortable.

But back to the Great Escape. Super-crazy inmate Hydell, played by Joseph Gilgun, gets loose and lets everybody else out of stasis, which is shockingly easy. One guy does it at gunpoint in about one second, with no safety protocols or required agreement from another person or anything. It looks like you could literally accidentally bump a single button and turn 497 annoyed convicts loose at any moment.

Equally shocking is the fact that one convict (Alex, played by Vincent Regan of Ghost Rider: Spirit of Vengeance) manages to take charge of things with ease. Granted, he’s only got maybe a dozen or so guys actively working with him, but the other 484 don’t seem to show any interest in anything except hanging around, beating each other up, and waiting for Alex to do something. It seems awfully trusting of them.

On the side of law and order, at least ostensibly, we have Peter Stormare, who I last reviewed in Dylan Dog: Dead of Night, as Langral, the head of the Secret Service, and Lennie James of Columbiana (also a Luc Besson script) as Shaw, who is something with the CIA. Guy Pearce used to be CIA too, I think, or at least his character was. He’s named Snow, by the way. I love Peter Stormare’s accent, so at least I had that to enjoy.

So to sum up, the laws of physics are broken and bent beyond all recognition, the characters aren’t that exciting — at least Maggie Grace doesn’t quite turn into a hapless damsel in distress — and the plot reminded me of some sort of contraption made by Rube Goldberg. It gets you to the end in 95 minutes — though it seemed longer — but you feel like you should have been able to get there in ten minutes if only someone had been paying even a tiny bit of attention. Oh, and people teleport. I think that was an editing problem. Guy Pearce is walking along an open corridor and the door immediately in front of him starts opening. He has no chance, you’ll think. They’ll see him and shoot him. Except in a split-second, he’s twelve feet away, hiding behind something I wasn’t actually sure was there a minute ago.

Three out of five is the absolute best I can do, and that’s mainly because I feel sorry for Guy Pearce. The effects were even iffy. There’s a chase scene at the beginning that looks like it was animated, I mean actually drawn out by hand, and they made everything extremely blurry to help disguise the fact. For a while I thought it might have been better if it hadn’t been so harshly edited down, but now I think that leaving it longer would only have made the boredom worse.