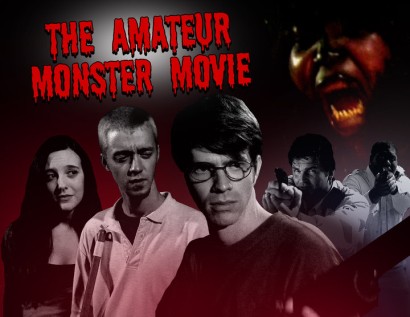 I saw this at a film festival, so let me steal something of the way it was introduced there. The host first asked the audience, on the count of three, to shout out the title of their favorite zombie movie. (I went with 28 Days Later.) Then he asked us to shout out the title of our favorite werewolf movie. (I could only think of The Wolfman, but it’s a good thing I didn’t say Teen Wolf, since he kind of made fun of everyone who yelled that.) And lastly, he asked us all to shout out the name of our favorite zombie and werewolf movie, and there was mostly silence. Somebody yelled “Van Helsing!” really loudly, which works if you count Frankenstein’s monster as a zombie, but that really doesn’t seem to me to have the right feel to it.

This, however, is most definitely both a werewolf movie and a zombie movie, in the pretty traditional sense of both, as well as a comedy, because how could it not be with a title like that? We begin in true horror movie style, however, with the bloody slaughter of some hapless Boy Scouts who are out camping. Their chosen campsite is on a place called Cadaverous Island, so they really should have expected their own bloody deaths. Anyway, the geekiest of the Boy Scouts is Randy (Ryan Dewerth, who was also the stunt coordinator), and when his best friend learns of his terrible demise, said best friend vows revenge.

The best friend is played by lead actor and key grip Chris Ouchie — which seems kind of appropriate for a horror movie, actually — and the character’s name is Walter Romero, in a nod to George A Romero, director of the famed Night of the Living Dead. Walter is just as much of a geek as his lost friend, but he’s determined and he has the help of a guru. That’s how the character is listed, The Guru, played by Bruce Spielbauer. I can’t say as his advice is exactly wise, but he seems to like Walter and wants to help him survive. The Guru lives in a dirty, crowded shack and is convinced a werewolf is responsible for Randy’s death. Walter just looks at him funny, but eventually gives up on arguing because that’s probably always the best way to deal with this guy.

Walter next sort of accidentally recruits the assistance of Johnny Mason (Kyle Richards, who also directed), who spends most of his time high on something or other. Johnny, apparently because he has nothing better to do, offers to help Walter get out to the island. This involves going over to party at the home of Ashley Valinski (Samantha Goetz, who only acts), because her dad has a boat. I was thinking they meant some sort of real boat, with a motor, but apparently every boat in the place is a rowboat or a canoe, so I was a little surprised that Walter didn’t just steal one, since he’s so determined to kill that werewolf and all.

But wait! There’s more, namely an island full of ravenous zombies. Now how much would you pay? Strangely, just about everyone seems a lot more concerned about the werewolf than the zombie hordes, not just the vengeful Walter, though I’m not sure why. I know I’d be a lot more worried about hundreds of walking dead than one single werewolf, especially since he doesn’t even seem to be able to turn anyone else into a werewolf. The local police, represented by Officer Larry Hopkins and Officer Duane Black (Steve Golla and Stephen Kimble, respectively), are on zombie patrol, but they’re about the only ones for the longest time.

I’ll stop there so as not to ruin any surprises, since there are a few of them. It struck me as the sort of movie that’s either really great or really terrible. Luckily it went the former direction, and the audience seemed to agree — it played to a packed house and was enjoyed by all. Sadly, the odds are it won’t be playing at a film festival near you, but see it if you get the chance. Four and a quarter out of five, and remember: when facing a zombie apocalypse, it’s okay to let your werewolf problem slide for a while.