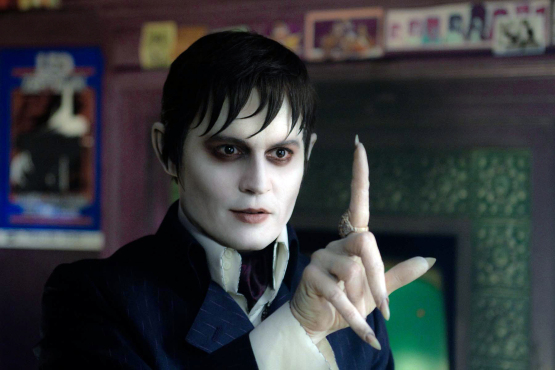 Dark Shadows is no longer a Dan Curtis Production, not by any stretch of the imagination, and that’s really a shame. I rented some of the original series on DVD from Netflix, and it was absolutely fun to watch. It was often melodramatic, sometimes the acting was so ridiculously over the top you wanted to giggle, and sometimes you would shake your head as a microphone drifted into the shot, or wince as someone struggled with a line. But somehow it still pulled you in, and while you didn’t quite forget all the rough edges, they just don’t seem especially important.

Dark Shadows is no longer a Dan Curtis Production, not by any stretch of the imagination, and that’s really a shame. I rented some of the original series on DVD from Netflix, and it was absolutely fun to watch. It was often melodramatic, sometimes the acting was so ridiculously over the top you wanted to giggle, and sometimes you would shake your head as a microphone drifted into the shot, or wince as someone struggled with a line. But somehow it still pulled you in, and while you didn’t quite forget all the rough edges, they just don’t seem especially important.

Here, I was wincing constantly as Johnny Depp (Pirates of the Caribbean) spent even more time chewing the scenery than he did chewing on people’s necks. Filmmakers and cast seemed to be making huge efforts to make the film funny, but it didn’t work, and they entirely forgot that they should also have been making it fun. Part of the problem, I suspect, is that Seth Grahame-Smith helped write the screenplay. He’s the guy who wrote Abraham Lincoln: Vampire Hunter (both book and screenplay), plus Pride and Prejudice and Zombies, et al. Maybe he’s a perfectly good writer, but he’s built a rather small and specific niche for himself, and they should not have attempted to make Dark Shadows into something in that mold.

Michelle Pfeiffer, last seen by me in Stardust, makes a valiant effort, but she can’t save the film, any more than Chloë Grace Moretz can. She was the little vampire girl from Let Me In; not vampire here, but still not exactly normal, either. By definition, no Collins is normal, especially not here.

But let me attempt a plot summary without getting bogged down in comparing old and new, because that’s just depressing. Barnabas Collins, back in about 1775, is a wealthy young man who has a fling with a servant in his parents’ house. Nothing new at all there. But this particular servant is Angelique, played by Eva Green from Casino Royale, and Angelique is a witch, in more ways than one. When he says flat-out that he he doesn’t love her, she flips out and turns into a cartoon villain (though not nearly as cartoonish as Barnabas himself). She kills his girlfriend, Josette, curses him with vampirism, and rounds up a torch-bearing angry mob to bury him “alive”.

One hundred and ninety-six years just fly by after that. I suppose Barnabas just plain went crazy in that coffin, which would help explain why so little he does makes sense. They try almost every culture clash joke you can imagine, most of which fall painfully flat, and he makes little to no effort to blend in, because he’s Johnny Depp and he’s not allowed to blend in. It only occurs to him that he should maybe hide some of the dead bodies he leaves in his wake when it’s necessary for the script, and that bugged me.

Anyway, his relatives — they say descendants here and there online, but even relatives is a stretch, and descendants doesn’t seem possible. He was apparently an only child who didn’t have any children, so the current crop of Collinses in Collinsport must be distant cousins at best. Michelle Pfeiffer is matriarch Elizabeth Collins Stoddard, one of the few characters who I could tolerate. I saw someone online accuse Chloë Grace Moretz of overacting, but I think they mistook not letting Johnny Depp steal her scenes for overacting. Michelle Pfeiffer doesn’t let him get away with that, either.

Elizabeth’s brother, Roger, is played by Jonny Lee Miller, soon to be in another vampire movie called Byzantium. I got the impression that he wasn’t a terribly warm or nice man in the series, and here that’s magnified a thousandfold, much like everything else, making him a petty thief who largely ignores his son and anything else that isn’t a pretty girl or a chance to make some easy money. Son David (Gulliver McGrath from Hugo), has been chatting with the ghost of his mother since she drowned a few years back, which has prompted Elizabeth to call in psychiatrist Dr. Julia Hoffman, played by Helena Bonham Carter of the Harry Potter franchise.

Dr. Hoffman mostly seems to drink a lot and take advantage of the Collins hospitality, since she largely ignores David, too, poor kid. Presumably Elizabeth pays attention to him, but it seems she doesn’t want to do that all day, since she also hires Victoria Winters to look after him, a girl who just happens to look exactly like the dead Josette. She’s played by Bella Heathcote, who was Amanda Seyfried’s mother for about three minutes in In Time. At least she seems to like David, and sympathize, though she’s also busy chasing ghosts and being pursued by a metrosexual vampire. No one seems to realize that’s what he is until the end, which is another silly part.

Jackie Earle Haley from Nightmare on Elm Street rounds out the main players as hapless Collins servant Willie, the first to be hypnotized by Barnabas. He does that a lot. I kept waiting for someone to watch him waving his clawed fingers around, saying, “Look into my eyes,” and replying, “You have got to be kidding.” Jackie Earle Haley is a good actor, too, but he’s got very little to work with here.

Sadly, a few good actors and a guest shot by Alice Cooper are about all this movie has going for it. The real Barnabas, Jonathan Frid, was onscreen as a party guest for about five seconds, along with Lara Parker, the original Angelique; David Selby, who was Quentin Collins, werewolf; and Kathryn Leigh Scott, the original Maggie Evans. (Maggie Evans is only sort of in this new version. They had to do a lot of weird things to thin down the cast, basically.) Oh, and some of the costumes were very nice, too, even the seventies ones, surprisingly.

Against these few good points, we have a “sex scene” that made me wince the entire time from sheer ridiculous awfulness, jokes that might have been written by a twelve-year-old, and plot points you can see coming a mile off. It was easy to tell when Angelique, for example, was going to fall back on her tried and true angry mob technique, and exactly how she was going to do it. So save yourself the cost of admission — pop some popcorn, rent the old episodes on DVD, and watch them at home with someone you love. As Barnabas’ father often said, family is the only true wealth. He was probably the only man in that family with any sense.