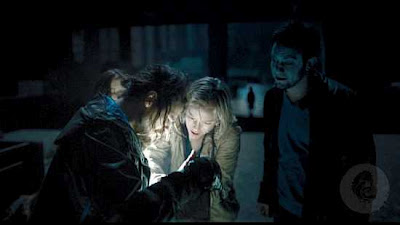 As soon as I heard the phrase “Extreme Tourism,” I knew I was in trouble. Tourists from the U.S. have enough of a reputation for doing stupid things as it is; we don’t need to add a reputation for doing stupidly dangerous things on top of that. At least this particular group of extreme tourists is only two-thirds American idiots, but still. The point is, a large Russian man named Yuri saw a chance for a new sort of business exposing visitors to his country to radiation, and jumped at it.

As soon as I heard the phrase “Extreme Tourism,” I knew I was in trouble. Tourists from the U.S. have enough of a reputation for doing stupid things as it is; we don’t need to add a reputation for doing stupidly dangerous things on top of that. At least this particular group of extreme tourists is only two-thirds American idiots, but still. The point is, a large Russian man named Yuri saw a chance for a new sort of business exposing visitors to his country to radiation, and jumped at it. Yuri is played by Dimitri Diatchenko, who was in Get Smart, though since he’s listed in the credits as “Russian Underling” I’m guessing he didn’t have a great deal of screen time. He’s ex-special forces, though personally, if I was going to go to anyplace that attracted extreme tourism I’d want an entire squadron of ex-special forces people along. I’m a coward, though, since I had some difficulty even talking myself into going to see this movie. MiB III will be my reward tomorrow.

Anyway, Yuri knows this guy from the U.S. named Paul, played by Jonathan Sadowski, who was a minion for the big bad guy in Live Free or Die Hard, and also in a good episode of Chuck. Paul really wants to go on Yuri’s special tour of Pripyat, which is the city built in 1970 for the workers at the nuclear power plant in Chernobyl and their families. You actually can tour the place, by the way, which is in an area called the Exclusion Zone, which sounds to me like another good reason not to visit it. The organizers of these trips advise prospective visitors not to take their own cars, since if your vehicle shows as radioactive when you’re leaving someone will confiscate it. Also, you’re supposed to wear clothes that cover your arms and legs and closed shoes. But it’s absolutely, perfectly safe, honestly. Cesium-137 only has a half-life of 30 years, and it’s already been twenty-six.

Paul’s brother Chris is visiting, along with his girlfriend Natalie, played by Jesse McCartney and Olivia Dudley, respectively. Jesse does lots of voice acting, including providing the voice of Robin/Nightwing in Young Justice, which I have to admit I never heard of before, but then, I’m a movie critic, not a TV watcher. Also along on this nightmarish journey — I mean, the trip of a lifetime — is Amanda (Devin Kelley), Natalie’s best friend, who Paul immediately wants to hit on since she just broke up with her boyfriend. Paul’s kind of a jerk sometimes. And then there’s Mike and Zoe (Nathan Phillips and Ingrid Bolsø Berdal), who are British (the actor’s actually Australian but I think the character was meant to be English) and Norwegian respectively, for that nice international touch.

They seem to have fun crawling through empty buildings and taking pictures in front of the abandoned Ferris wheel in the courtyard — not my cup of tea, but whatever floats your boat. It’s when they try to leave that things get bad. Their car won’t start, because someone messed with the carburetor or something. It’s a cylindrical sort of thing with a lot of broken wires, that’s all I know. This is when the whole thing falls into the usual horror movie pattern. Someone decides they just have to go out and check on some mysterious noise, someone else decides they have to go chasing after the first someone in order to “help”, and that’s when people start getting chewed on and the body count starts rising.

There is a touch more common sense here than I expected, mainly from Amanda, but it doesn’t help. There’s little that could have helped this script, perhaps, though the actors do their best. Don’t get me wrong; it’s very atmospheric and awfully creepy, because you almost can’t get a better location for a horror flick. It’s like an Old West ghost town, but more immediate. It looks dated, naturally, but these are still not so different from the buildings in any town of any size. Those shadowy corridors and overgrown roads are frightening enough by themselves; add in the extra, instinctive fear of radiation, and the whole place is deeply unsettling. The filmmakers might have done better with a documentary, since you really don’t need to add anything to that to make this a frightening film.

That isn’t the sort of frightening they were after, though. And the scare they produced isn’t the sort of scare that stays with you, apparently. I was fully expecting to still be nervous by now — I terrify easily and recover slowly, as some of you may know — but I’m actually pretty okay already, so I’m thinking it didn’t really work somehow.

Two and a half out of five. I was never bored, exactly, but I stopped caring what happened to the main characters somewhere along the way. They had shockingly little sense of self-preservation at times, which didn’t help. If they didn’t care about themselves, why should I? And the big reveal at the end was, well, not really all that exciting. Or revealing, come to that, though again, I had stopped caring at that point. And the characters, I suspect, had stopped caring well before that.