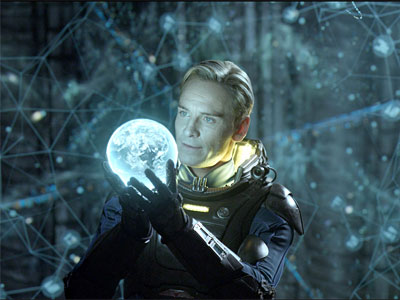 A long time ago, not in a galaxy far, far away but in a cave on the Isle of Skye, Scotland, someone created a bunch of cave paintings featuring an image of someone pointing up at a pattern of stars in the sky. Or possibly it’s an image of someone juggling very badly. It’s hard to say. This happened 35,000 years ago, according to Noomi Rapace of the last Sherlock Holmes debacle, who here plays Dr. Elizabeth Shaw. This, as she and her cohort in science Dr.

A long time ago, not in a galaxy far, far away but in a cave on the Isle of Skye, Scotland, someone created a bunch of cave paintings featuring an image of someone pointing up at a pattern of stars in the sky. Or possibly it’s an image of someone juggling very badly. It’s hard to say. This happened 35,000 years ago, according to Noomi Rapace of the last Sherlock Holmes debacle, who here plays Dr. Elizabeth Shaw. This, as she and her cohort in science Dr. Charlie Holloway (Logan Marshall-Green, Devil) quickly decide, is the last bit of proof they need for their thesis: namely, that humans originated someplace other than Earth.

This is where the scientific inaccuracies start creeping in. Paintings made in Scotland that long ago would have been made by Neanderthals, not modern humans, and while that’s not normally such an issue, it kind of becomes one when you’re dealing with DNA, as happens in this movie. We’re actually only 0.3% different from Neanderthals, which isn’t too shocking, but we’re also only about 1.2% different from a chimpanzee, and basically just as close to dolphins. DNA is kind of a strange thing.

We are also, however, zero percent different than the Engineers, as Shaw and Holloway call their theoretical alien makers, so the paintings being made by Neanderthals kind of goofs up the plot. Whatever the flaws, though, it’s still a fun movie. Nothing exactly comes as a surprise, but it’s still fascinating to watch all the pieces come together.

The Prometheus of the title is the ship that takes our intrepid scientists and the rest of the cast out to a moon with the lovely name of LV-223. The captain of the ship is Idris Elba, last seen in Ghost Rider: Spirit of Vengeance, but the owner of the ship is also along for the ride, which must be awkward. Said owner is Meredith Vickers, played by Charlize Theron, and between this and Snow White and the Huntsman, she’s carving out quite a niche for herself as the icy, unapproachable authority figures. She might actually be more like a manager, but she certainly acts like she owns the place, and no one contradicts her.

Pursuing his own secret agenda — you can’t really call him part of the crew — is David, who you can tell is an android because his name begins with D. Ash for Alien, Bishop for Aliens and Alien 3, Call for Alien: Resurrection, and now David. He also has perfect hair and doesn’t fidget. He’s played by Michael Fassbender, aka Magneto from X-Men: First Class. You can say the same about Vickers — the perfect hair and no fidgeting, I mean, not that she’s played by Michael Fassbender — and some people do seem to think she’s an android. I’m pretty sure she just had a really messed-up childhood, though.

Guy Pearce from Lockout is also hanging around, made up to look about a thousand years old as Peter Weyland, of the infamous Weyland Company. He became so convinced that our scientist heroes were right that he built the Prometheus to challenge the gods, like the original Prometheus, who gave fire to the mortals. Thousands of years later, we’re still playing with fire.

Again, the science is bad. They carbon-date an alien specimen even though they don’t know what the carbon concentration should be on that planet, a vital fact. Someone says that the atmosphere is 2% carbon dioxide and being without a suit for more than a few minutes will kill you, except people can manage pretty well at anything less than 3%. You wouldn’t like anything above 2%, certainly, but it wouldn’t kill you, just make you breathe heavily while you’re sweating and headachy.

There are some doubtful plot points as well. Captain Janek, while staring at a computer-generated map of the area the team is exploring, complete with little yellow diamonds from The Sims showing everyone’s location, calls up the team to ask them where they are. It’s a nice map, but clearly no one knows how to read it, since two people (Sean Harris of The Borgias and Rafe Spall of Hot Fuzz) also manage to get lost and everyone else manages to lose track of them. I think there was some confusion between filming and post-production.

As Star Trek V so conclusively proved, sending any sci-fi movie off in search of God greatly increases the risks of producing a really bad film. This attempt manages to avoid most of them, though I have to admit I’m still a little annoyed with a certain issue of timing that seems to suggest an extra layer of religious overtones that haven’t even been touched yet. I’m hoping I’m wrong, since it was based on the highly inaccurate carbon dating mentioned above, but somehow I don’t think so. Since the ending is wide open for a sequel, I don’t think we’re safe yet.

It wasn’t a total loss, however, at a solid three and a half out of five. The acting was good, and much worse science has hit the silver screen. It’s a fun watch, and for those who already know the mythos, you’ll probably enjoy putting together all the pieces and catching the clues. If not, well, you won’t have quite as much fun, but it’s still a better than average summer action flick. And there’s a little teaser at the end, too, though not a scene, just a little information about Weyland Corporation, which is “born” on October 11, 2012. Looks like Skynet will have some competition.