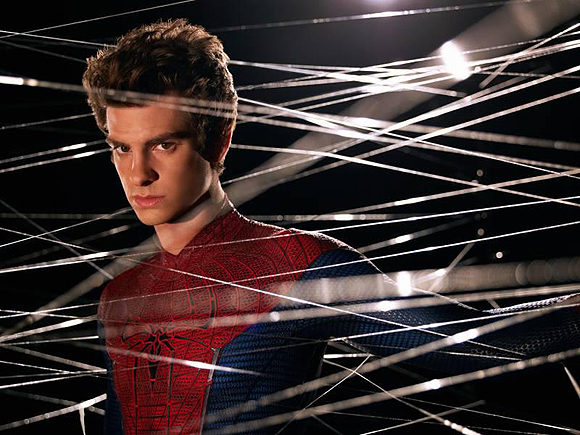 I initially thought that most people were likely to feel the same way I did about this new Spider-Man business. At a previous movie, a trailer was shown for this movie and also for Dark Knight Rises. The first got a rousing round of indifferent silence; the second prompted a lot of whispered, excited-sounding comments.

I initially thought that most people were likely to feel the same way I did about this new Spider-Man business. At a previous movie, a trailer was shown for this movie and also for Dark Knight Rises. The first got a rousing round of indifferent silence; the second prompted a lot of whispered, excited-sounding comments. So I thought, “Aha, so I’m not alone in thinking that this new take on Spider-Man looks silly and wrong and isn’t looking forward to watching it.” I mean, I watch them because it’s my job and I’m glad to take the hits on the rotten movies to save others the awfulness, but I wasn’t looking forward to it.

I may have been wrong, however, since there was a smattering of applause from the audience when the movie ended. Either they liked it or they were just relieved it was over. It did seem awfully long, actually. My new theory, however, is that if you’ve ever read a Spider-Man comic in your life, you won’t like this movie. If you haven’t, you’re all set. I sat down and watched a movie that was mostly well-written and well-acted yet had none of the warmth and charm of the first Spider-Man movie, and so felt disappointed, nay, even robbed. Non-comic-readers sat down and watched a mostly well-written and well-acted action flick about cool superpowers, didn’t think much about anything else, and had a good time.

I’m sure some of this will be repetitive even for those who haven’t read the comics, but bear with me. In the Marvel universe, Peter Parker’s poor parents (say that five times fast) were killed when Peter was a small boy. After this his Aunt May and Uncle Ben raised him. The parents were retroactively made CIA agents somewhere in the mid-90’s, I think it was. They’re up to something secretive here, too, but not that. Close, but not quite, like so many other things here.

Peter’s dad Richard here is made into a geneticist, played by Campbell Scott, while mom Mary is played by Embeth Davidtz of The Girl with the Dragon Tattoo. Unusually, they’ve mostly stayed dead in the comics, though I’m not sure we can count on that here. Anyway, Peter is raised by Sally Field (just supply your own favorite thing she’s been in) and Martin Sheen from The West Wing, here wearing a faintly alarming pair of dentures. There’s nothing wrong with the acting there, clearly, but just the same I never quite felt there was any real connection between them and Peter. He’s played here by Andrew Garfield, Eddie the reporter from Red Riding, and yes, this is an extremely different role.

Emma Stone of Zombieland plays Gwen Stacy, Peter’s first girlfriend in the comics. I remember she liked science, but here she’s better than Peter, or at least thinks she is, and she might be right because Peter doesn’t seem like the science whiz here that he usually is. She works as an intern for Dr. Curt Connors, aka the Lizard. The character appeared in the earlier flicks — the human character, that is — but never did become a super-menace as this version, played by Rhys Ifans of the Harry Potter series, manages to do. One thing they did right is to avoid cluttering the movie with two villains, at least, so while there are hints of a repeat performance by the Green Goblin, they’re only hints.

Anyway, Dr. Parker used to work with Dr. Connors, so Peter seeks him out in hopes of getting some questions answered. Connors, however, has had his right arm amputated and is obsessed with getting it back. Since he’s a geneticist, he thinks he can fix anything sooner or later, and it’s just ridiculous, him having to put up with a missing arm. After all, lizards regrow their tails all the time! You can see where this is heading.

Connors works for Oscorp, so there’s your foreshadowing for Norman Osborn as the Green Goblin. I feel sorry for anyone who follows Willem Dafoe in that role, but I’m not sure they’re worrying much about casting for these movies, at least not for many of the major parts.

Irrfan Khan from Slumdog Millionaire is Osborn’s right hand man and general thug, who passes along all orders so they didn’t actually have to cast the part of Osborn this time through. There’s a sort of a teaser a short way into the credits, but nothing at the very end, so you’re safe to leave after that scene. I know I was glad to get out of there.

Denis Leary from Rescue Me plays Captain Stacy of the NYPD and Gwen’s father, and he’s by far the best thing about the movie, though Stan Lee’s cameo is a very close second. It seems like Capt. Stacy needs to keep a closer watch on his officers, though, since most of them appear to know next to nothing about handling guns. One is so anxious to shoot Spider-Man (he’s a menace, y’know) that he doesn’t bother to check his line of fire and almost kills a random car thief that Spidey has already webbed to the wall.

Speaking of plot holes, there’s also a bit with some construction cranes that seemed to make no sense whatsoever, so if anyone knows what was up with that, please do let me in on it. Sadly, I think the only reason for it was that they wanted to try to capture some of that warmth from the first film, that sense of New York as a place that takes care of its own no matter what, and fell short. Add web-slinging joke here.

Nothing against Andrew Garfield, as he’s a perfectly good actor, but he’s no Peter Parker. He looks too cool and confident, for one thing. He does a great job on the Spider-Man banter and quips, but when he isn’t wearing the costume there’s never any real sense of him as the picked on nerd. In fact, he tries to rescue a couple of kids who seem much further down the high school pecking order, so you never really feel like he’s the underdog made good, and that’s too bad.

They also reworked the incident with the burglar and Uncle Ben just enough to make me think that someone didn’t like the original scenario because it was made out to be all Peter’s fault… which is kind of the point… but I suspect someone didn’t get that and wanted the character to be more sympathetic or something. So yeah, way to go there. He gets super-powers, but that’s almost exactly the only thing that changes about him in the course of the film, and that was disappointing.

I know, everyone’s raving about it, but three and a quarter out of five is the best I can do, and one of those three is all Denis Leary’s. The quarter is because Connors quotes Michaelangelo — yes, the painter, but he also wrote a poem called “The Silkworm”: “that changing like the snake I might be free to cast off flesh wherein I dwell confined.” That’s a loose translation, but hey, he’s a doctor, not a poet.