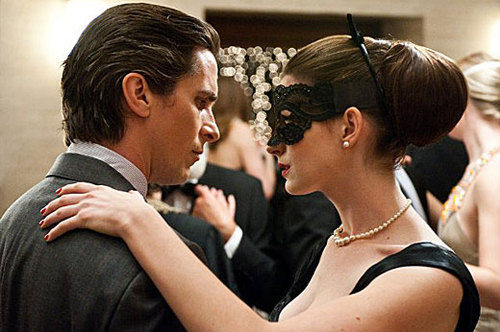 Back when all this started, seven years ago, I had a hard time imagining what, exactly, Christopher Nolan might do to the entire concept of Batman once he was allowed to play with it for a while. Not that I have anything against his filmmaking, far from it, but somehow he didn’t seem like the right person for the job, given that I mostly knew him from movies like Inception and its only somewhat less confusing cousin, Memento.

Back when all this started, seven years ago, I had a hard time imagining what, exactly, Christopher Nolan might do to the entire concept of Batman once he was allowed to play with it for a while. Not that I have anything against his filmmaking, far from it, but somehow he didn’t seem like the right person for the job, given that I mostly knew him from movies like Inception and its only somewhat less confusing cousin, Memento. Very good films, but not films that would lead one to think he’d do a good super-hero epic.

And epic is the word. Each installment of the trilogy is exactly twelve minutes longer than the last (your MCND FunFact TM), and when you’re starting at two hours and twenty minutes you end up with some pretty hefty films. To its credit, though, I didn’t actually realize how long this film was while I was watching it.

Of course Christian Bale is back as Bruce Wayne, along with Marion Cotillard, with whom he co-starred in Public Enemies. Marion plays Miranda Tate, which isn’t a name you’ll find anywhere in Batman’s previous incarnations — she’s a wealthy woman who invested in Wayne Enterprise’s attempts to create a wonderful, cheap, clean energy source, and you can tell already that such an investment is doomed to fail.

People like loyal butler and friend Alfred, still perfectly portrayed by Michael Caine, keep pointing out that Miranda is lovely, because they don’t want to literally drop a ton of bricks on Bruce’s head, but they do want to point out that he should really try some fresh air once in a while. (Michael Caine was in the aforementioned Inception with Marion Cotillard.) Bruce, you see, has been living a little like Howard Hughes these last eight years, limping around one wing of the Wayne mansion that could swallow my entire house without noticing and seeing almost no one except Alfred. I guess losing the woman you love and having your alter ego wanted for murder will do that to a guy.

When Anne Hathaway, last reviewed by me as the White Queen in Alice in Wonderland, appears in Bruce’s life just long enough to annoy him, rouse his suspicions, and steal his mother’s necklace, Bruce finds himself unwillingly getting interested in the world again. The world seems pretty perfect, what with crime getting less and less all the time, but you know that won’t last. Wayne Enterprises is floundering after the attempt at clean energy collapsed, Deputy Commissioner Foley (Matthew Modine) wants to make his reputation by arresting Batman, and the crime isn’t going down in the way people think.

Crime has just gone down underground, and the sewers of Gotham are crawling with mercenaries / cult members who are fanatically, frighteningly loyal to their leader, the man known as Bane. He’s played by Tom Hardy, who was of course in Inception. Young cop Blake (Joseph-Gordon Levitt, Inception) realizes something’s amiss, though, and he believes Commissioner Gordon even when he tells an unlikely tale of these mercenaries after being shot. Gordon is again played by Gary Oldman, who was shockingly not in Inception but did appear in a little something called the Harry Potter series.

Much of the rest of the plot won’t exactly shock anyone who knows the comics — one scene almost exactly copies a famous panel from one Batman title, for instance — but it is fascinating to watch the pieces come together. Sometimes, sadly, it seems a little forced as well, probably because they had to rush to fit everything in even with 164 minutes to work with. Plus the screen is overflowing with stars, and I haven’t even mentioned Morgan Freeman of Red, reprising his role as Fox. Well, now I have, and while his part is small, he’s still Morgan Freeman. Anne Hathaway gets all the best and most sarcastic lines, though.

The characters are all wonderful, though the plot has its weak points. I’m pretty sure that even in its most ruthless moments, the city of Gotham isn’t inclined to shut off the electricity when the bill is just a day late being paid, for instance. There’s an entire subplot involving a supposedly inescapable prison in some unnamed foreign land that I didn’t really care for — that’s one of the places where it seemed like they were pushing and rushing to tie everything together, which may have been part of the problem. It’s really awfully easy to escape, though, so I don’t know why more people didn’t do so. Maybe with prisons, reputation counts for a lot.

I think I still like the first part of the trilogy better, but this was a worthy ending. Four and a quarter out of five. Not quite everything is tied up at the end, but it doesn’t leave you wondering too much. No teasers after the credits, but do look out for a neat little cameo at the “sentencing hearings”. And remember why we fall: so we can learn to pick ourselves back up.