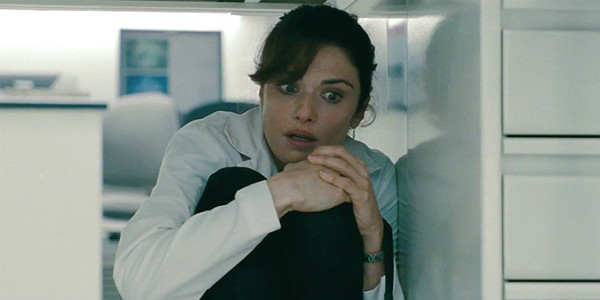 For once, I feel absolutely qualified to review a movie, since I own all the Bourne movies and have watched them at least a few times each. I practically have the first one memorized. You should see the way I hang on every word when Chris Cooper and Brian Cox are sniping at each other. If that isn’t how the people who really run top secret black ops agencies talk, it should be.

For once, I feel absolutely qualified to review a movie, since I own all the Bourne movies and have watched them at least a few times each. I practically have the first one memorized. You should see the way I hang on every word when Chris Cooper and Brian Cox are sniping at each other. If that isn’t how the people who really run top secret black ops agencies talk, it should be.

As the tagline helpfully reminds us, there was never just one. Once you have Jason Bourne you really shouldn’t need anyone else, but I guess even he can’t be everywhere at once, and sadly, they killed Clive Owen off long ago. Anyway, based on the previews I was kind of expecting the implication that Jason Bourne, while still impressively scary, just wasn’t quite as good as the new and improved crop, but that didn’t happen, thankfully. There’s a scene near the beginning where some government scientist-type speaks in reverently excited tones about how wonderful it would be if they could only capture Jason Bourne alive, and everyone else barely manages to stop themselves from rolling their eyes so hard that the earth tilts a little more on its axis.

Jeremy Renner, who was Hawkeye in The Avengers, is Aaron Cross, one of the aforementioned new and improved crop. He’s on a scavenger hunt. No, really. It’s a hunt that seems to encompass half of Alaska and requires things like swimming in icy water and mountain climbing without gear, but still a scavenger hunt. He meets a fellow agent, played by Oscar Isaac of Drive, at a little shack just in time for everything to go sideways in that little corner of the world. Aaron’s already suspicious of this scavenger hunt, and now he has all sorts of extra things to be suspicious about, like why the wolves dislike him so much and the drone fighters dislike him even more.

This new batch, by the way, works for something called Outcome. I found that a really disappointing name, and I keep forgetting it and have to look it up. No more fun names like Treadstone and Black Brier… though I guess, officially, those names never existed anyway. But now it’s Outcome, run by Edward Norton, who I haven’t reviewed before, believe it or not, and Stacy Keach, who was in Machete, believe it or not. Scott Glenn of Sucker Punch is also somewhere in the hierarchy, along with Donna Murphy from Tangled and David Strathairn as Noah Vosen, one of the few survivors from The Bourne Ultimatum. They’re listed in rough order of most important to least important, but I’m not sure exactly how everyone fits in. Granted, this is the sort of movie where you expect to be in the dark about some of the details — the guys flying the drones use all sorts of techy-speak, for instance, but you knew in general what was happening — except in this case I think they went a little overboard on that sometimes. I started out trying to write notes on things like “1.5% increase in mitochondrial DNA,” but I had to give up on that.

Because, you see, these black ops agents aren’t just highly trained and somewhat brainwashed, as was always implied before. Rachel Weisz from Dream House plays Dr. Marta Shearing, one of the scientists who plays with chromosomes all day in order to give these agents that extra edge. For once, they actually retroactively added something that makes sense. If you create super-agents, you need to have a way to control them if they get uppity, and the natural way to do this is to make them dependent on something only you can give — in this case, two little pills that boost the agents’ mental and physical prowess. It’s kind of like Flowers for Algernon as far as the mental prowess goes, at least in Aaron’s case. The implication is that he’s a little uppity despite the pills, but they seem to be saving more on that for a sequel.

Since everything has gone sideways, thanks largely to the events of The Bourne Ultimatum happening just barely off-screen, it’s time to tie up loose ends at Outcome, and you know what that means. Zeljko Ivanek from Tower Heist is a scientist who inexplicably flips out and shoots everyone of any importance at Sterisyn-Morlanta, the company where Marta works, and manages to kill himself and everyone else, except her. The powers that be figure they’ll have to take out Marta another way, except since they’ve foolishly assumed that Aaron is dead instead of obtaining a corpse, fingerprints, and DNA evidence, ‘taking Marta out’ proves to be less simple than expected.

They globe-trot to the Philippines this time, fighting and sneaking and ducking the government the entire time, and there are even little hints of the original incidental music in the background. Plus they have Moby with a new version of “Extreme Ways” at the end. Except I didn’t like the new version of the song, as it was way too happy. And, well, Aaron Cross is no Jason Bourne, though Jeremy Renner does an amazing job of taking a basically two-dimensional character and making him interesting. Ditto for Rachel Weisz, who’s given even less to work with, because at least Aaron gets to have hints of a tragic past.

Let’s go with three and a half out of five here. I’ll never memorize this movie, but it’s still a cut above the usual action-thriller. The script is sadly more concerned with making everything fit neatly into the previously established Bourne timeline than with just being good, but I’ve seen worse. Wow, have I seen worse. The good news is that if they continue on with this tangent, the scripts may improve because there won’t be a Bourne timeline to work around any more… unless they also do another Bourne movie, which I’m torn about. At some point it’s just going to turn into sacrilege, and the way things have been going, I think we might be pretty close to that point.