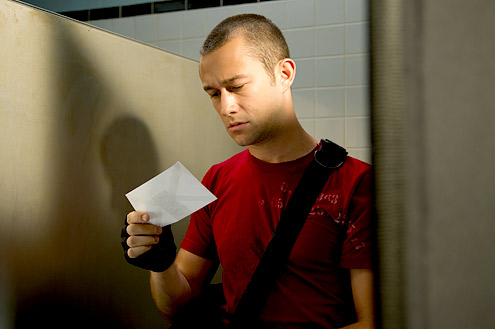 Despite all the fax machines and email programs in the world, sometimes you’ve just got to get something physically from one place to another in a ridiculous hurry. This is why there are bike messengers, and apparently quite a lot of them in places like New York. One such company, at least in this movie, is Security Couriers, where people are paid a pittance to race around on bikes and weave through traffic like a real-life Mario Kart.

Despite all the fax machines and email programs in the world, sometimes you’ve just got to get something physically from one place to another in a ridiculous hurry. This is why there are bike messengers, and apparently quite a lot of them in places like New York. One such company, at least in this movie, is Security Couriers, where people are paid a pittance to race around on bikes and weave through traffic like a real-life Mario Kart.

Joseph Gordon-Levitt from Dark Knight Rises plays Wilee, one of these unfortunates, and yes, people make the Wile E. Coyote joke. Strangely, he seems to enjoy his job. Even the other messengers think he’s got a death wish because his bike has no gears and no brakes. According to him, having brakes only makes you get hurt. Well, this not-stopping thing might keep him from getting hurt, but he causes cars to run into each other left and right, so I think the main bad guy is actually correct when he says that the whole city hates bike messengers.

Speaking of the main bad guy, Bobby Monday, he’s played by Michael Shannon of Jonah Hex, and he’s quite good at looking crazed and sounding sarcastic, though he’s really kind of an idiot otherwise. The really scary part is that he somehow managed to make police detective with an attitude like that. He says he has “impulse control issues”, and he’s right. He also has a gambling problem, and that’s what kicks off the plot.

I’ve discovered a new game thanks to this movie, though it looks kind of intimidating. It’s a domino game called Pai Gow, which is Cantonese for “make nine”. The whole list of rules and rankings is here, but it basically comes down to making certain combinations of numbers based on the dominoes you draw. Poor old Det. Monday isn’t very good at the game, and I don’t just mean that he has bad luck. It takes him forever to figure out what his hand is worth, and the other players all harass him about that. He has bad luck, too, though, and he’s suddenly in desperate need of lots of cash.

Enter Nima, played by Jamie Chung, who was Amber in Sucker Punch, and here has a mysterious something that’s worth a lot. She needs to get this something physically from one place to another in a ridiculous hurry, and that’s when she remembers Wilee. Nima’s roommate, Vanessa, is Dania Ramirez from Quarantine, and she’s Wilee’s co-worker and sort of girlfriend. They have a slightly vague relationship, and while Wilee is unreliable, at work he’s the best there is. Well, everyone needs something to brag about, even if it’s only that they’re the leading cause of fender-benders in Manhattan.

Monday figures out that Wilee has this mysterious something, and luckily Wilee has no respect for authority or the bad guy would’ve won inside ten minutes. The movie turns into one huge chase scene, wisely broken up a little by showing some of the background in flashbacks here and there so you don’t have to sit through 45 minutes of explanation followed by 46 minutes of chase.

Complicating things further are Manny, another messenger played by Wolé Parks, who has a huge macho rivalry thing going on with Wilee, over both bikes and girls, and Christopher Place as a bike cop who keeps running into Wilee, sometimes literally. Christopher was in Captain America, but you won’t be able to spot him there since he was a stuntman. He’s pretty much a stuntman here, really.

There isn’t much more plot than that. It seems like it was fun to make, despite Joseph Gordon-Levitt almost killing himself by plowing into the back of a taxi during filming. There’s a clip of that a minute or so into the end credits. Because it was fun to make, it’s therefore fun to watch, and I think Joe can make nearly anything fun to watch anyway. He’s just one of those actors. The annoying stuff was CGI — at least I hope it was — the parts where his character predicts the future, like Sherlock Holmes, so that he can decide which of the dozen or so options he has for ducking past pedestrians and around cars will let him avoid getting splatted like a bug. Those parts just made me jump in horror and cringe at the way they reminded me that I was watching a movie.

I’ll go with three out of five. It’s got its charm, but that can only substitute so much for plot, and it seemed awfully long while I was watching it. I was shocked to discover that it was only 91 minutes. The ending was good, though, and there’s a nice if predictable use of a flash mob, which, as you can imagine, bike messengers really like. Premium Rush, by the way, appears to be code for “ride extra-super-crazy fast for this job” — like they need that excuse.