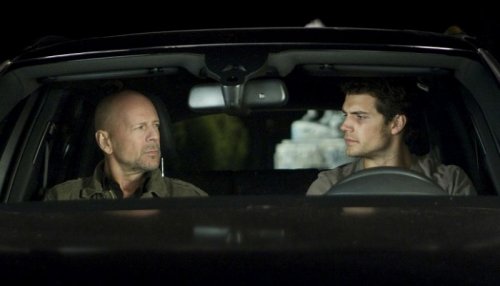 Remember last week, when I pointed out that all sorts of English and Australian actors are learning to sound like they’re from the U.S. in order to steal all the acting roles? Well, the situation is only getting worse.

Remember last week, when I pointed out that all sorts of English and Australian actors are learning to sound like they’re from the U.S. in order to steal all the acting roles? Well, the situation is only getting worse.

For instance, main character Will Shaw is played by Henry Cavill, who was in Immortals sounding English and here sounds, well, not-English. He’s from Jersey. No, not that Jersey, the Jersey in the Channel Islands, which are part of England. Caroline Goodall and Rafi Gavron (24), who play Will’s mother and brother Josh respectively, are also English. Australian Emma Hamilton of The Tudors plays Josh’s girlfriend Dara. At least Bruce Willis of Red, who plays Will’s dad Martin, was born in the U.S. Okay, well, he was actually born in Germany but that’s all right because his mother was on a U.S. military base at the time. Whew.

Okay, plot. The Shaw family plus Dara are on a vacation in Spain, tooling around on a sailboat. Considering some of the later plot points, I’m guessing wife Laurie picked the destination, but who knows? There are a couple of things not quite explained. After a family fight, Will takes off into town to make a call, since his dad threw Will’s phone overboard during said fight. When he gets back, the empty boat is drifting around aimlessly. Shockingly, the local police turn out to be worse than useless, and soon Will finds himself on the run in a country where he doesn’t speak the language. He complains that his family moved something like 17 times in 18 years, each time to a new country, yet he somehow managed to avoid learning any Spanish, which seemed odd. He knows less Spanish than I do, and most of mine is from watching the occasional episode of Sesame Street.

Anyway, old “family friend” Jean Carrack (Sigourney Weaver of Paul) is also running around, though she gets to do so mostly in very nice cars. The people who have the Shaws want a briefcase full of top-secret information in exchange for the family. You guessed it: dad Martin isn’t really a cultural attache, like he always told his kids; he’s a CIA agent, like Carrack. But Will doesn’t trust Carrack — I’m guessing partly because she asked him to make a martini for her when he was ten, which seems much too young to start bartending — and instead ends up joining forces with Lucia (Verónica Echegui) and her friends, including the owner of a dance club she hangs out at, a guy named Maximo. He’s played by Óscar Jaenada of The Losers and seems slightly shady, though obviously not compared to the CIA. He’s ready to help, though, and does. It turns out that one of the many people Carrack’s henchman, Gorman has killed is Lucia’s uncle, who once saved Maximo’s life. Gorman is played by Joseph Mawle, who was Abraham’s dad in Abraham Lincoln, Vampire Hunter, and is, of course, English by birth. Yeah.

Throw in Roschdy Zem (from France) as Israeli agent Zahir, add a couple of gunfights and car chases, mix well, and you’ve got yourself a martini. I mean action flick. Sadly, though, it’s a little too dry, despite Sigourney Weaver’s best efforts. It isn’t quite a stereotypical Hollywood action thriller, but it doesn’t manage to be truly exciting, either. The final car chase scene drags on too long, and no matter how many times someone mentions having a strict deadline as far as getting that briefcase, no one seems in enough of a hurry about it. The movie never hits its stride somehow.

So two and a half out of five is the best I can do, really, since I don’t really want to encourage anyone to go watch it. I mean, if all you want is mindless action, that’s fine, but you’d be better off with The Bourne Legacy. This isn’t what you’d expect from a Sigourney Weaver movie, or even a Bruce Willis movie, come to that. Also, I’m not sure where the title comes from. It seems like they pulled it from a list of generic movie titles and the plot from a list of generic action movie events. Hm. Maybe it’s time for another Top 5 list.