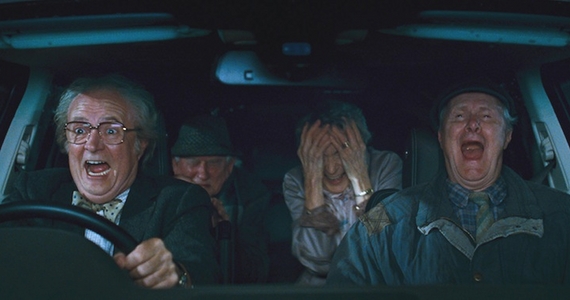 It isn’t any good trying to start with the main characters because there are seventy-five main characters. All right, it isn’t really that bad, but there are a lot. When one actor plays five or six roles, having a lot of characters is inevitable. Jim Sturgess, who was in 21, has the most roles at seven, by my count, but most people play at least three. I suppose that must save time in casting, at least. (For sanity’s sake, I’ll stick with major roles only.)

So we’ll try starting with the plot, though that isn’t going to be much better. For one thing, the plot races back and forth among no less than five main storylines, and while that isn’t nearly as confusing as you might think, you have to pay attention, if only to catch all the roles one person plays. In the mid-19th century, a lawyer named Adam Ewing, played by the aforementioned Jim Sturgess, is headed home after negotiating a contract involving the slave trade. A century later, Ben Whishaw (who will soon be Q in Skyfall), as composer Robert Frobisher, reads Ewing’s memoirs when he stumbles across them in the home of Vyvyan Ayrs, the aging composer for whom Frobisher works.

Forty years after that, in the seventies, Halle Berry of X-Men fame is reporter Luisa Rey. She meets Frobisher’s former lover, Rufus Sixsmith (James D’Arcy — he’ll be playing Anthony Perkins in Hitchcock), now a nuclear physicist. Rufus knows about a scandal involving the nuclear reactor being built by a company called Swannekke, bringing the wrath of Hugh Grant as Swannekke executive Lloyd Hooks down on physicist and reporter alike.

In the present day, Jim Broadbent of the Harry Potter series, who played Vyvyan — that is a male name, by the way — also plays Timothy Cavendish, a publisher fallen on hard times. His brother, also played by Hugh Grant under several pounds of makeup, tricks him into an old folks’ home run by Hugo Weaving of Captain America in drag. Yes, that is absolutely as terrifying as it sounds, and then some.

Jim Broadbent, by the way, was in a BBC/Comic Relief production with Hugh Grant, called The Curse of Fatal Death, wherein both actors played The Doctor in different incarnations. I thought that was an excellent FunFactTM, and also it seemed like you’d need a break from that plot about now. I know I did.

Anyway. In 2144 in Neo Seoul, there’s a Fabricant — a person created in a lab to work as a servant — called Sonmi-451, played by Doona Bae. She finds herself at the center of a plan to free the Fabricants, led by Jim Sturgess, back again for more. And even further out than that — I want to say 2300 and something — Tom Hanks is Zachry, part of a primitive post-apocalyptic group being terrorized by the warlike Kona tribe.

That’s way too long, and I didn’t even get to Susan Sarandon of Wall Street: Money Never Sleeps, as the Abbess of Zachry’s tribe (also among other roles). And this was exhausting. Seriously. I’m worn out. There are entire websites devoted to charting the ins and outs of the book upon which the movie was based, so no wonder. There are all sorts of details that reveal the complexity of the whole thing, like the appearance of the Swannekke logo in Neo Seoul, and how the movie Sonmi watches connects up with the Timothy Cavendish tale. So it’s very well done, but, yeah, exhausting is the only word for it.

I suspect that if you don’t like this movie, you may go straight to hating it, because it’s weird, but I thought it was pretty good, despite how much it wiped me out. Four and a quarter out of five. It’s overwhelming at first, but despite the jumping around you kind of get the hang of watching it after a bit. If you really want to know how everything and everyone connects, though, then I suggest a flowchart.