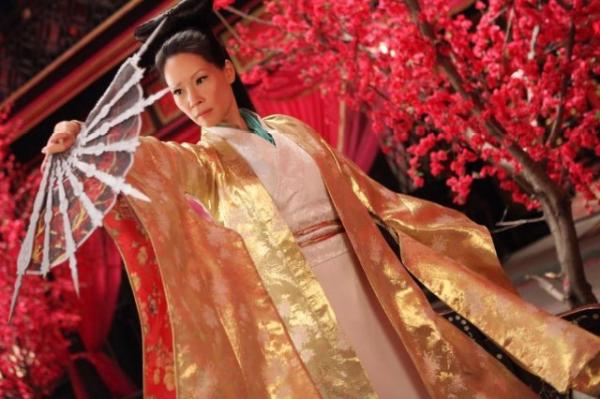 However, it might as well be a Quentin Tarantino movie, because it’s so violent and strange. It’s an R-rated movie with amazing amounts of blood and guts, yet there’s no nudity, despite much of the action taking place inside a brothel. Also, some fight scenes are virtually bloodless, while others feature positive gushers of the stuff, even when that isn’t quite appropriate. Most of the movie isn’t appropriate, though, one way or another, so that’s really just par for the course.

Since he wrote the script and directed, RZA gets to be the title character. I had kind of expected the title character to be played by Russell Crowe, Robin Hood, but while he’s certainly a tough guy, he doesn’t actually have any metal parts. You would think that no one in the film would have metal parts, since this is supposed to be set in China somewhere around the mid-19th century, and cyborgs haven’t been invented yet, but you would be wrong, as I was. It’s really a very strange movie.

It was also originally a much longer script, about four hours’ worth, that was later trimmed down to 90 minutes, so there’s a voiceover at the beginning, plus a couple of flashbacks and just generally a lot of information getting thrown at you. I must admit, I may have missed a few details here and there, seeing as how there were also a lot of spleens and livers getting thrown around along with said information, but I think I caught all the important stuff. Information, I mean, not vital organs.

Russell Crowe is Jack Knife. Well, not really (he eventually admits to being named Jack C. Wales), though that is how the character’s listed on imdb. He does carry a large, complicated knife around with him, though it’s more a Swiss Army knife, since it spins and shoots bullets and such. I found it a little silly myself. Anyway, Jack is in the small Chinese town of Jungle Village for the same reason that everyone else is flocking to Jungle Village, and it isn’t to make fun of the name. No, it’s because a huge shipment of gold is passing through there and everyone wants it.

Why anyone thought it was a good idea to stop for the night in a town constantly rocked by internal warfare is beyond me, but that’s what it’s like in Jungle Village. They have Lions, Wolves, Rodents, Jackals, and Hyenas, oh, my, though I’m not entirely sure that China has ever had actual hyenas in it. These clans love to fight and kill each other. The Lions have agreed to protect the gold, which means their leader, Gold Lion, can’t possibly last long, and sure enough, he doesn’t. His son, Zen Yi (Rick Yune), must abandon lovely fiancee Chi Chi (Zhu Zhu, who was Sixsmith’s niece in Cloud Atlas) and go seek vengeance.

He also says they’re still going to protect the gold, but that doesn’t happen since later the Gemini Killers are protecting it. They’re led by a husband and wife team (Andrew Lin and Grace Huang) who are supposed to be scary-good martial artists, but in fact have such a weird fighting style I can’t believe it would work in a fight. I’d explain the “Gemini Stance” that they use, but I doubt anyone would believe it without seeing it. They should also really be called Yin-Yang, since that’s what they’re going for, right down to him in black and her in white.

Anyway, Byron Mann plays Silver Lion, who as you might expect was Gold Lion’s second in command. He’s gone a little loopy, though. With help from such people as Poison Dagger (Daniel Wu) and Brass Body (Dave Bautista, Chuck), he’s going to get that gold. And yes, pretty much all the names are like this. Brass Body really does turn into something brass-like, and while Poison Dagger should really be called Poison Dart, it’s close enough.

RZA is the town blacksmith, run ragged by all the clans wanting weapons. He’s saving up to run away with his love, Lady Silk, played by Jamie Chung of Premium Rush. Lady Silk works at the Pink Blossom, the local brothel, so there’s a contract to be bought out. Also, Lucy Liu, in quite a departure from her role in Kung Fu Panda 2, is Madam Blossom, and she’s a little scary, so it’s probably an expensive contract to buy.

So several clans all vying for gold and/or power; internal strife among the Lions, cruel and ruthless villains with pseudo-magical powers, and lots of scantily-clad women. The three frat boys who were also in the theatre when I was there seemed to enjoy it a lot, in other words. Since I was totally expecting to dislike it, I brought a (male) friend along with me to get his perspective, but he didn’t really care for it, either. He ranked it about a lukewarm three out of five; I’m leaning towards two and a half, so let’s call it two and three-quarters. The acting is strangely convincing even when nothing else is, so that was quite an achievement right there.