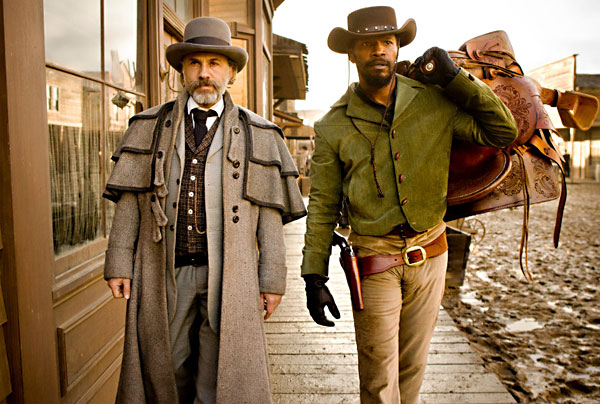 First, let me say that I have nothing against the acting, which was top-notch. For instance, Jamie Foxx in the title role is very good at being broody and scary, and surprisingly (given the content of the script) also manages not to seem like a caricature. He’ll be playing Max Dillon, aka Electro, in Amazing Spider-Man 2, and hopefully they won’t edit this one to death like they did the first time around.

And Christoph Waltz (The Three Musketeers), here playing the German dentist turned bounty hunter Dr. King Schultz, was wonderful. He said and did the most outrageous, foolhardy things without hesitation and with beautiful panache. At one point, Leonardo DiCaprio (Inception) as wealthy plantation owner Calvin Candie, has to cover up the fact that he has no idea that ‘panache’ refers to a flamboyant style and manner. Leo is a caricature, mostly, but while I’ve never thought he was much good at playing a villain, he does pretty well with it here.

Let me talk about the plot before I forget. These reviews are getting more meta all the time, I think. Dr. Schultz is on the trail of the Brittle brothers, who are wanted, dead or alive. Not knowing what they look like, the good doctor seeks out Django, who does know what they look like because they were the overseers who used to whip him. As further punishment, Django’s former owner (Bruce Dern), has sold Django separately from his wife. She’s played by Kerry Washington, who was in Lakeview Terrace with Samuel L. Jackson. (He’ll show up in a bit.) The wife’s name — wait for it — is Broomhilda von Shaft, aka Hildy. Her first owners were German, you see. It should really be Brunhilda, but not here, where nearly everyone has a name that’s at least slightly odd. Supposedly, she’s the great-great-grandmother of the Shaft character. Now that’s really meta.

Then we have the aforementioned Samuel L. Jackson from the Avengers franchise, playing Stephen, the butler / head house slave for Candie. That isn’t his exact job title, but since the one they used involved the N-word, I’d really rather not type that. However many times they dropped the F-bomb in Pulp Fiction, they used the N-word at least that many times here, I think. Anyway, it’s painful sometimes, watching Samuel L. Jackson roll his eyes, even though it’s mostly an act.

Nearly everyone who ever played a tough guy or a gunslinger or something of that sort is in this movie somewhere, by the way, if only briefly. Besides Bruce Dern, there’s Lee Horsley from the TV show Guns of Paradise, Don Johnson from Machete, Tom Wopat from The Dukes of Hazzard, and Franco Nero, who played the original Django. This isn’t a remake, though; they only borrowed the title and some of the feel of it.

To sum up — I know, much too late — I got very bored by the end. You see the ending coming a mile away, and the only character I was interested in was Dr. King Schultz, so once his storyline was wrapped up I stopped caring so much. Three out of five is the best I can do.

On the other hand, we have the opinion of my co-reviewer, which was, in a word, “Awesome”. I’ll translate that into a four and a half out of five.

Averaged out, that makes three and three-quarters. I don’t think it’s necessarily a “guy movie”, but while I was reasonably entertained for about two hours, the movie lasts two hours and 45 minutes, so there was an unfortunate entertainment gap. On the plus side, at least Kevin Costner had to bow out.