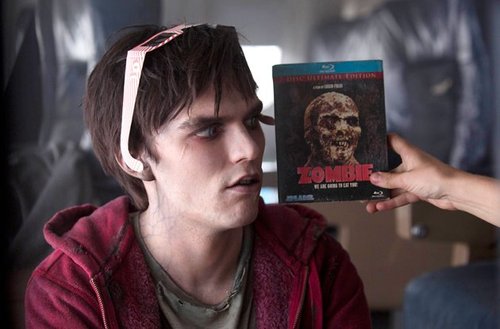 Do zombies dream of Cream of Wheat? According to this movie they do, at least a certain type of zombie. They’re actually called corpses here, to differentiate them from the skeletons, another sort of walking dead that are actually much more vicious, though you wouldn’t want to encounter either sort in a dark alley. The movie is based on the novel of the same name, and the novel is based on Romeo and Juliet, sort of.

Do zombies dream of Cream of Wheat? According to this movie they do, at least a certain type of zombie. They’re actually called corpses here, to differentiate them from the skeletons, another sort of walking dead that are actually much more vicious, though you wouldn’t want to encounter either sort in a dark alley. The movie is based on the novel of the same name, and the novel is based on Romeo and Juliet, sort of. So it was inevitable that it would become a movie, I suppose, since it was trendy not long ago to add zombies to classic stories, and zombies themselves are nearly always trendy in movies.

Anyway, Romeo is already dead when this version starts, so things can only improve from there, right? Romeo, or rather R, because he’s forgotten the rest, is played by Nicholas Hoult, who was the Beast in X-Men: First Class. Juliet, or rather Julie, is Teresa Palmer (I Am Number Four), though her last name isn’t Capulet, it’s Grigio. Her father, Mr. Grigio, is busy saving humanity. He’s set up guards, organized armed patrols, to go out and search for food and medicine, and arranged for a gigantic concrete wall around the human part of the city. Naturally, he’s played by John Malkovich of Transformers: Dark of the Moon (and soon to be of Red 2), because I can’t think of anyone else I’d rather have playing an obsessed paranoid type.

Anyway, while out on a salvage mission — because I guess her dad expects it of her, to go out on these things, although they don’t make that clear — Julie is attacked by corpses. Also in the group are best friend Nora (Analeigh Tipton of Green Hornet) and boyfriend Perry (Dave Franco of 21 Jump Street, who also happens to be James Franco’s little brother). They equal the Nurse and Paris from R&J, respectively, for those of you keeping score.

R falls in love with Julie at first sight. A minute later, he’s killing her boyfriend, though to be fair he doesn’t know that’s who he is, and also Perry tries to kill him first. But R doesn’t have the heart — so to speak — to hurt Julie, and so he hides her from his fellow corpses by smearing her with blood so she won’t smell so tasty. I know, ew, but it takes remarkably little blood, so I guess they don’t have such a great sense of smell.

The gimmick of the movie is that love makes R feel alive again, literally, though he must have been an odd sort of zombie all along. He has a ‘house’, or rather an airplane, that’s full of stuff he’s collected, including several dozen sunglasses, a turntable, and a stack of vinyl. It’s a cornucopia of seventies and eighties rock, basically, and that’s where he brings Julie. She doesn’t like it there, unsurprisingly, since for all she knows R’s resolve will break and she’ll become a midnight snack, but she’s still remarkably stupid about making ill-advised escape attempts.

Because however much R wants to protect her, it takes a while before his friends start to catch on. They’re not very bright, after all, despite all the brains they eat. R’s best friend is M (Mercutio), played by Rob Corddry, last seen by me in Heartbreak Kid, so he’s definitely moving up in the world, and like R, he’s slightly brighter than the average zombie, since he can string two words together sometimes. Even so, his first reaction to Julie is, “Lunch!”

But R’s attachment to Julie has started something: hope. The skeletons, it turns out, hate hope as much as they love brains, so they decide — well, act instinctively, more like — to put a stop to it by eating Julie’s brains, and maybe R’s in the bargain, though they don’t normally eat corpse brains. Sorry, this review is turning kind of disgusting, isn’t it? It’s really a surprisingly non-bloody, movie, though, and the worst part is when you see a corpse giving up and starting to turn into a skeleton, because that’s where the skeletons come from.

And it’s really a very fun movie. Horror-comedy is a difficult combination to pull off, but it works out quite well, to the tune of three and three-quarters out of five. Nora needed more scenes, but that’s my only serious complaint, aside from Julie’s occasional stupidity, and that sort of thing is almost integral to any zombie flick. Oh, and they should have released it on Valentine’s Day weekend. I realize it’s an unconventional sort of date movie, but some of us don’t really want to see yet another Nicholas Sparks novel adapted for the screen.