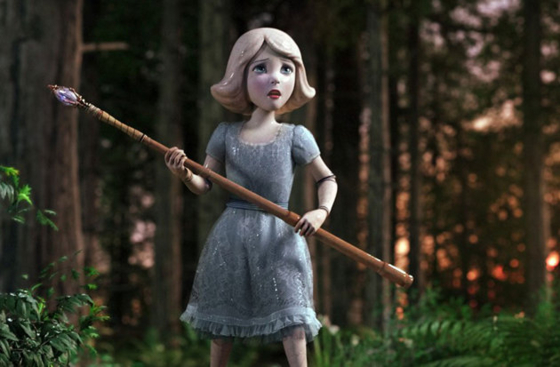 James Franco (Rise of the Planet of the Apes) is Oscar, aka Oz, a struggling magician with a struggling circus. It’s called Baum Brothers Circus, and Oscar’s downtrodden assistant (played by Zach Braff of Scrubs) is named Frank, both after L. Frank Baum, creator of the Oz tales. (The “L” stands for Lyman, so no wonder that neither he nor the scriptwriter was inclined to use it.)

Anyway, Oscar is a womanizer, apparently rather good at it, though I can’t imagine why, since he’s perpetually at a loss for words whenever anyone calls him out and often resorts to a big, goofy grin to carry him through. He makes up some story about a family heirloom and women seem to swoon over it, but I don’t see the attraction myself. Only with Annie (Michelle Williams, Shutter Island) does he give up on the schemes, but she’s just announced that she’s getting married to John Gale, and five points to anyone who gets the reference.

Cue obligatory tornado. (That’s not quite the aforementioned reference, but close.) Oscar, caught up in it in his hot-air balloon, pleads to the heavens for another chance… and suddenly he finds himself in a technicolor world where giant flowers bloom when you look at them and river fairies play rough. He promptly meets the good witch Theodora (Mila Kunis of Black Swan), who informs him that his arrival has been prophesied and he needs to go be their king now, please, thank you. Since kingship involves things like royal treasuries, he’s glad to oblige.

Rachel Weisz (The Bourne Legacy) is Theodora’s sister, Evanora, and she isn’t so easy to convince of Oscar’s identity. She calls him an oaf, and I’m inclined to agree. Oscar is less sure about this royalty business when he learns that he must first kill a wicked witch. He’s reluctantly persuaded to try when he discovers that all he has to do is destroy her wand to kill her. So an oaf and a coward, basically, though I guess I can’t fault him for not wanting to face off against a witch while armed only with a bag of linking rings and colored handkerchiefs.

Glinda looks exactly like Annie (of course), Oscar’s monkey servant Finley sounds exactly like Frank (naturally), and Joey King of Battle Los Angeles both voices the China Girl and appears as a wheelchair-bound spectator at Oz’s magic show in Kansas, where apparently no one quite knows the difference between a stage magician and a faith healer. I loved the China Girl, by the way. She’s absolutely adorable and looks astonishingly real at times.

Rounding out the cast are Tony Cox (The Warrior’s Way) as Knuck, the palace herald, and Bruce Campbell of Spider-Man 3 as a hapless gate guard, though you’re more likely to recognize his voice than his face under all that makeup. Again, the makeup and effects are great, but something never quite seems to click about the film, and it was kind of a letdown.

I can’t really go higher than three and a quarter out of five. When reviewing Rise of the Planet of the Apes, I mentioned that James Franco seemed to get a little lost among all the apes and effects, but I thought that was a natural side-effect of the nature of the movie. Now I’m wondering if he just doesn’t have the charisma to carry an entire film, because that was what Oscar lacked. He’s supposed to be selfish, untruthful, greedy, and all that, and those things Franco portrays just fine, but Oscar is also supposed to be charming, clever, and fundamentally likable despite his faults, and that doesn’t really show here.

I heard they considered Robert Downey Jr. for the part, and while I’m glad they didn’t cast him because Oscar needs to be quite a young man, that’s definitely the sort of actor they needed, him or a young Harrison Ford-type, someone like that. And then I was saddened to realize that I couldn’t think of any young actors like that. Someone needs to step up, because when a script is predictable, it needs lots of charm to work. I know the tagline is “The land you know. The story you don’t,” but that, sadly, is wrong. Even the rather scared six-year old sitting in the row in front of me could have told you the rest of the plot after the first fifteen minutes.