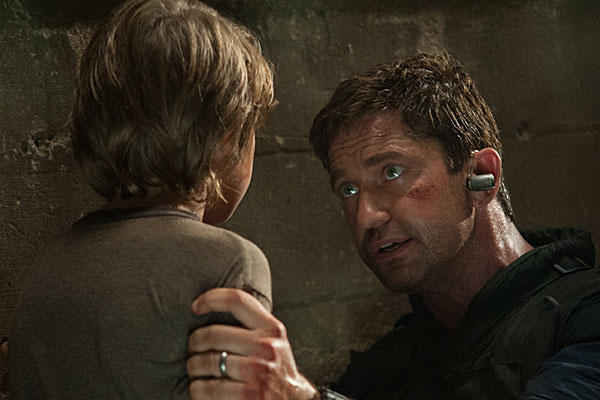 Main good guy Mike Banning (played by Gerard Butler, who I last saw killing people in bloody ways in Gamer) is a Secret Service agent, having been assigned to the President’s security detail for some years. The day disaster strikes, though, he’s sort of an old school Secret Service agent, back when their main job was to track down counterfeiters, because he’s working at the treasury department. This is because one icy night, when an accident left the presidential limo dangling off the edge of a bridge, Mike saved the president first (like he’s supposed to) which meant that the president’s wife died. She’s played by Ashley Judd, from Bug, and I feel bad that I even have to mention that movie, but somehow it’s the only other movie of hers I’ve reviewed. She doesn’t even get a chance to act here, really.

Anyway, Aaron Eckhart of Battle Los Angeles is the president, with Finley Jacobsen paying his son Connor. Coincidentally, he was also Conor (age 8) in Marley & Me. And in the middle of being a single parent and trying to run an entire country, a whole bunch of frighteningly well-organized terrorists have to show up.

Like Ashley, Morgan Freeman (The Dark Knight Rises) who plays the Speaker of the House is kind of wasted here, though he does at least get to step up to run the country for a while once both the president and the vice-president are unavailable. Unavailable in this case means being held captive in the very heavily-fortified bunker that’s supposed to keep them safe when things like this happen. Oh, the irony. And Angela Bassett of Green Lantern, playing the head of the Secret Service, gets to help him out. It was annoying, though, when Mike seemed to be the only person who was savvy enough to figure out what was really going on. I mean, come on. Angela Bassett looks like she can see right through anybody, and Morgan Freeman isn’t likely to miss much, either.

I don’t want to give too much away, since there are some decent plot twists. Radha Mitchell, who was Bruce Willis’ partner in Surrogates plays Mike’s wife, a nurse who gets to help patch up all the casualties from this mess. It’s a very bloody and violent movie, as you might suspect. Let’s just say that when you’re using a gun meant for shooting down planes on people, it isn’t a pretty sight. At all.. And Dylan McDermott of The Messengers is Forbes, an old buddy of Mike’s who’s now gone into private security — at least I think that’s what happened, though I’m not absolutely clear. The movie seems a bit rushed at times, though it’s exactly two hours long and they also resort to using captions to introduce people. Which mostly works, but they don’t do that for Forbes, hence my confusion.

The people behind me seemed to think this was a comedy, unfortunately, though at least the guy stopped kicking the back of the seats after I turned around and glared at him. They were talking during the credits, saying that some of the lines were inadvertently really funny, but I think they may have had some sort of mood disorder, since they also laughed when there was no dialogue and the images on the screen were of things like a Secret Service agent bleeding to death and a tattered American flag being hauled down. So they frightened me a little, and I was too nervous to glare at either of them after that.

So let’s see. Three and a half out of five. They rush through the introductory stuff, but aside from that the pacing is good, and while it is a little gory, it could have been much worse. The acting is good, and despite the opinions of the two people behind me, none of the dialogue that was supposed to be serious actually was laughable. I know about these things. I speak as a veteran of Splice.