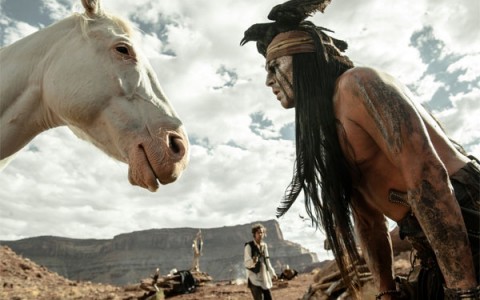 I accidentally noticed that the reviews for this movie were very mixed — surprisingly, since I have to admit I wasn’t expecting to hear anything good about it at all — and now I know why, since I’m still making up my mind about it. It was definitely better than I expected, though I can’t decide if that actually puts it into the category of “good” or not.

I accidentally noticed that the reviews for this movie were very mixed — surprisingly, since I have to admit I wasn’t expecting to hear anything good about it at all — and now I know why, since I’m still making up my mind about it. It was definitely better than I expected, though I can’t decide if that actually puts it into the category of “good” or not.

There were certainly a few pleasant surprises. I’d never seen Armie Hammer in anything before, but as it turns out he can act reasonably well — I never cringed, at least. The plot was solid, and they didn’t use any anachronistic music. On the other hand, they didn’t always bother with making sure the dialog fit the time period (people kept asking, “What’s with the mask?”, for example), they threw in some weird supernatural overtones that didn’t quite seem to fit, and then there was Johnny Depp (who may or may not be an actual Native American Indian) of Dark Shadows as Captain Jack Sparrow. I mean, as Tonto. He doesn’t play individual characters anymore, he just uses one standard persona and puts different skins on it, so he’s becoming more and more distracting.

I’m not sure I liked the frame story they used, either — the movie is supposed to be Johnny Depp… I mean Tonto… relating his adventures to a little boy (Mason Elston Cook) six decades after the fact, which by my calculations makes Tonto about 102, and still crazy after all these years. He wears a dead crow as a hat and feeds it regularly, and also has some odd ideas as to what, exactly, constitutes “trading”. He’s chasing after what he calls a “wendigo”, actually cold blooded killer Butch Cavendish (William Fichtner, Phantom). Cavendish is due to be hanged, and railroad magnate Mr. Cole (Tom Wilkinson, Green Hornet) aims to make a spectacle of the hanging. (The original Green Hornet, as you may know, was supposed to be the grandnephew of the Lone Ranger.)

Of course the hanging can’t possibly go as scheduled, and before you know it Cavendish is on the loose. James Badge Dale of World War Z is Texas Ranger Dan Reid, who gets a posse together to go off in search of the fugitive, only reluctantly letting little brother John (Armie Hammer) come along. From there anyone who knows anything about the Lone Ranger can guess how well that posse thing works out. Helena Bonham Carter, also of Dark Shadows, shows up as brothel owner Red Harrington who has her own grudge against Cavendish and is glad to help catch him. She kind of also plays the same character all the time these days, so Johnny Depp must be rubbing off on her. And meanwhile, Dan’s wife and son (Ruth Wilson and Bryant Prince, respectively) are left to wait and hope.

Of course I expected gunfights, improbable chase scenes, etc., and you certainly get those. The final chase scene, however — to the strains of the William Tell Overture, naturally — seemed to go on for an hour and a half and I was getting pretty bored by the end, so something went very wrong there. Also, at one point Red is scolded because she left something “unrefrigerated”, so either the scriptwriters were getting a little punchy, or Johnny Depp ad libbed the line and the filmmakers were too scared to ask him not to do that. Yes, there was such a thing as a refrigerator in 1869 (a dangerous device, full of things like ether and ammonia), but it was neither mass-produced or something that one would expect a Comanche who’s been busy hunting wendigo most of his life to know about. There was definitely no Sears & Roebuck back then, though, and they mention that, too.

Better wrap things up now before I ramble on longer than that chase scene. I still can’t make up my mind, though. With the possible exceptions of Helena and Johnny, I don’t think anyone had any fun making it, and that’s a shame. Three out of five, maybe? I’ll have to go with that, I guess. It’s probably odd that I didn’t love it or hate it, since that seems to be the general buzz. At least it was a lot kinder to its original source material than most of these sorts of movies. Maybe that will catch on.