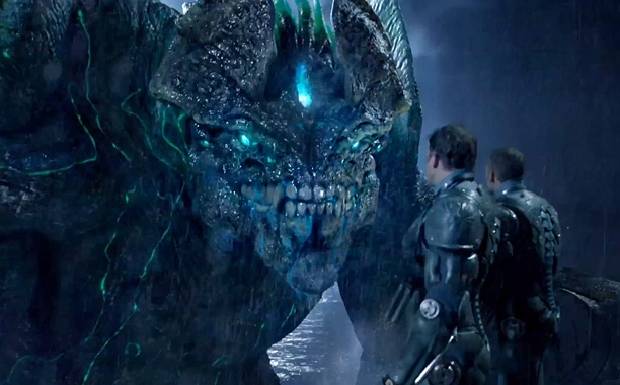 Godzilla-like, these critters crawl up from the ocean floor and trample cities and eat people. And they’re huge, so they must need to eat a lot of people. They’ve been raiding coastal cities for years — and yet somehow people still live along the oceans — and they’ve been christened Kaiju, Japanese for monster. To fight them, the world has created the Jaegers, from the German for ‘hunter’, which are basically giant suits of mechanized armor. They’re king-sized Iron Man suits, basically, run by two pilots since no one person can handle them for long. They hook up directly to the nervous system, you see, and it’s a bit much for one brain to handle.

Raleigh Becket (Charlie Hunnam) is one of the few pilots who has flown solo for any length of time, something he had to do because his brother and co-pilot was killed while they were fighting a Kaiju. Thanks to the neural connection (aka the Drift) necessary for two pilots to control the same thing, Raleigh felt every bit of his brother’s pain, so as you can imagine, he isn’t anxious to go through that again. Jaegers have fallen out of favor, anyway — thanks to some mediocre pilots, they don’t seem as shiny and great anymore, so the governments of the world have instead started sinking all their efforts into building huge walls around the world’s land masses. Stop and ponder that for a minute — giant walls encircling entire continents. I still can’t fathom why anyone thought that might be a good plan, but possibly they were shell-shocked after years of warfare with Cthulhu monsters.

Idris Elba (Prometheus), the man in charge, persuades Raleigh to come back to the fold for one last effort to prove the usefulness of the Jaegers, because face it: Idris Elba can persuade anyone to do anything. He’s playing Stacker Pentecost here, because all the characters have odd first names except for one lone guy named Chuck. For example, Charlie Day (one of the voices in Monsters University, if he sounds familiar) plays Dr. Newton Geiszler, one half of the comic relief — I mean, one half of Pentecost’s research team, which has also fallen on hard times. The other half doesn’t even get a first name — he’s just Gottlieb (Burn Gorman, Dark Knight Rises), math geek.

I’d better get back to the plot. The geeks are convinced that the increasing attacks are leading up to something disastrous. Pentecost has a plan to use a nuclear device to seal up the rift in the ocean floor through which the Kaiju are arriving. Pentecost’s assistant Mako Mori (Rinko Kikuchi) hopes to become a pilot, but with just four Jaegers left, that’s a hard job to get. One half of the Australian Jaeger team thinks Raleigh’s a lightweight who shouldn’t even be there. And all the while, the war clock is ticking down to the next probable attack.

The entire movie is improbable, really, but there were no gaping plot holes. I saw someone online asking why they didn’t just shoot missiles at the Kaiju, but I’m fairly sure that it’s difficult to impossible to lock a missile onto a fast-moving, cold-blooded, organic target. The characters, while likable, aren’t terribly well-developed because there’s just not enough time between fight sequences. Ron Perlman (Drive) chews the scenery beautifully as an unbelievably flashy criminal named Hannibal Chau, but he only gets a few scenes. You can pretty much see the ending coming, and despite having so few Jaegers left, they burn through them with reckless abandon. And yet I didn’t care at all about any of that while I was watching it, because you know what? It was fun.

It was four out of five stars worth of fun, in fact. I suspect that the real critics are being much less kind, but who cares? So far none of the other summer movies have pulled me in like this, and kept me interested and involved through the whole thing, without once reminding me that I was only watching a film. Maybe I missed a plot hole, but given that if I did, it was entirely because I was having such a good time, I really can’t bring myself to feel guilty.