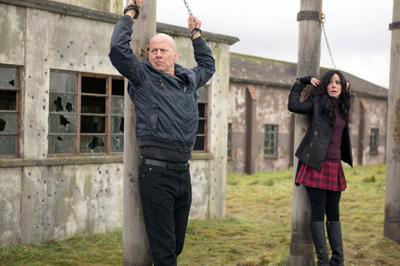 This time around, the average age of the seven main characters is a tiny bit higher — 57 years exactly, as compared to 56.714 last time. Well, none of us are getting any younger.

This time around, the average age of the seven main characters is a tiny bit higher — 57 years exactly, as compared to 56.714 last time. Well, none of us are getting any younger.

Since we last saw our heroes, Frank Moses (Bruce Willis, Looper) has done his best to settle into being a homebody with girlfriend Sarah (Mary-Louise Parker). Sarah, however, is finding ordinary life rather dull after her big taste of adventure. So when Marvin (John Malkovich, Warm Bodies) resurfaces and says there’s trouble brewing, she’s all for chasing off after it. It seems there’s a lot of interest in an operation called Nightshade from back in the late seventies, and several important people want to find out what Frank and Marvin know about the operation. Just one small problem: Frank and Marvin don’t know anything about the operation, because they’ve never heard that code name before.

First an operative named Jack Horton (Neal McDonough, Captain America) tries to kidnap Frank — or kill him; he isn’t too fussy on that point. Then MI-6 gets in on things by blackmailing Victoria (Helen Mirren) into accepting a contract to kill Frank and Marvin (and Sarah, for good measure). Then the U.S. decides they need to bring out the heavy hitters and hire Han Cho Bai (Byung-hun Lee, who was in G.I. Joe: Retaliation, with the Bruce), the world’s top assassin, to take them out, too.

Also thrown into this mess is Catherine Zeta-Jones of Side Effects, as “Frank Moses’ kryptonite”, former flame Katja. She’s with Russian counterintelligence, and since Nightshade involves the possible destruction of Moscow, she also wants to know what’s going on. Brian Cox (Rise of the Planet of the Apes) also shows up, though sadly briefly, to help out Mother Russia. Then there’s The Frog (David Thewlis of the Harry Potter franchise), who claims to know everything but refuses to tell. He also played William Cecil in Anonymous, and at one point Helen Mirren, while pretending to be Queen Elizabeth I (don’t ask) shouts for someone to bring Cecil to her. And then there’s Anthony Hopkins (Thor) who knows quite a lot but has also been on some heavy-duty psychiatric drugs for the past three decades or so.

It’s still a fun romp, though sadly the plot relies a little too much on odd coincidences and bad guys who are strangely reluctant to just shoot the good guys already. Also, Marvin should, by rights, be even more deeply paranoid by now — after all, quite a few people really are out to get him — but instead he seems remarkably trusting when the script needs him to be. So it doesn’t quite rise to the level of the first, but it doesn’t miss by much. There was a good crowd again — I think I was probably the youngest person there, by a fairly considerable margin — but again a good time seemed to be had by all.

Three and three-quarters out of five. It stands alone pretty well, so you can venture out to see it even if you don’t know the first flick, and they’re already talking about a Red 3. And why not? There’s no substitute for experience.