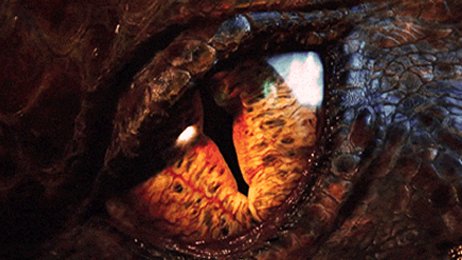 Now it’s easier to see how they managed to pad the book out to three movies — they not only added in Legolas, they wedged in a romantic subplot… and a very unlikely one, too, let me add. Of course, any overt romance in a Tolkien novel is unlikely, so whenever you see it in a movie adaptation you can be pretty sure it was added in later by command of some studio executive.

Now it’s easier to see how they managed to pad the book out to three movies — they not only added in Legolas, they wedged in a romantic subplot… and a very unlikely one, too, let me add. Of course, any overt romance in a Tolkien novel is unlikely, so whenever you see it in a movie adaptation you can be pretty sure it was added in later by command of some studio executive. The point is, don’t go rummaging through a copy of the book looking for Legolas or the elven captain of the guard Tauriel (Evangeline Lilly, Real Steel) because you’ll only get frustrated.

I’m still not having much luck keeping track of which dwarf is which, but it still doesn’t really matter. Kili (Aidan Turner, Being Human) gets to do more this time through, though since part of that involves being poisoned by one of those nasty orc arrows he isn’t exactly having a lot of fun. As in the novel, the band of dwarves is forced to go through the forest of Mirkwood, you see, which isn’t a nice place, and after surviving the giant spiders they quickly fall into the hands of the local elves, so at least they had a good way to work in Legolas, etc. And speaking of the giant spiders, this is not a film for arachnophobes, let me tell you.

Anyway, while getting out of that particular trouble, the orcs shoot lots of arrows at them, hence poor Kili’s predicament. There’s a lot more focus on what happens in Lake-Town in the movie, with the very minor character of Bard (at least he’s minor as far as I remember, since I don’t actually remember him) getting much more of a role, in a bit of foreshadowing for later. He’s played by Luke Evans, though even the expanded role is a bit of a letdown, I suppose, after having played Zeus in Immortals, even if it was a pretty lousy film.

Also in Lake-town is Stephen Fry (Sherlock Holmes: Game of Shadows) as the Master of the town, though he only has a small part and I didn’t think it worked out terribly well, sadly. Sometimes it seemed as though they were working just a little too hard to get some funny scenes in, which rarely leads to scenes that are actually funny.

The good news is that despite the addition of the extra subplots the movie never quite feels overloaded, and overall the pacing is much better than the first, thankfully. And Smaug is seriously cool. Dragons are like cats, really, toying with their prey. Benedict Cumberbatch is the voice of Smaug as well as being the Necromancer again, but you still don’t actually see him. I think they gave him the dragon to voice so he’d have something to do.

This time they’re also a lot more about the gold, which I guess is only appropriate since Smaug is swimming in the stuff. It makes sense, though, since they’re more and more in need of help, and piles of gold are a good way to get help, generally. And of course there’s a certain gold ring. The movie stops rather than comes to an end, so be prepared. It’s a cliffhanger — not quite literally, though there are certainly a lot of cliffs involved in general. It isn’t a movie for acrophobics, either.

What it is, however, is a movie that gets four and a quarter out of five, just like its predecessor, so let’s hope they can keep it up for the third one. Of course, we now have to wait almost exactly a year for the third installment, so fingers will have to stay crossed for a while. On the other hand, it’s understandable — according to the imdb, it took a week just to render one of Smaug’s scales. Ouch.