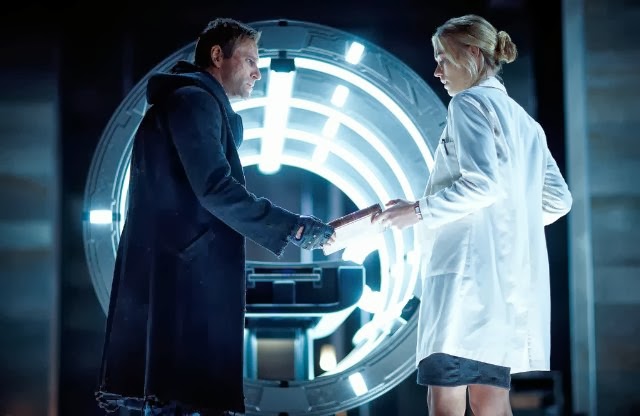 Anyway, he’s called Adam here, which is usually all the name he ever gets, poor guy. He gets called ‘it’ a lot, plus things like ‘the creature’, ‘an abomination’, etc., and then people wonder why he has anger issues. And to think that Aaron Eckhart was the president of the United States the last time I reviewed him. At least he gets to be super-strong, unaging, and very hard to kill.

Unfortunately, he’s also caught up in a war between Good and Evil. Interestingly, Good in this case isn’t always pretty — they can look human, but when they fight they’re gargoyles rather than angels, though it was the Archangel Michael who originally created them or whatever. They’re immortal like Adam, that’s the point. And their archenemies the Demons seem to be immortal, too, so there’s a lot of that going around in this movie.

Since Adam is something entirely new he gets the attention of both sides shortly after his creation in the 1790’s. The Demons want him very much, so the Gargoyles, unsurprisingly, think that maybe the best thing would be to destroy him so the Demons can’t have him. Gideon (Jai Courtney, Jack Reacher), their best fighter, is all for the destruction option, but Leonore (Miranda Otto, Lord of the Rings), isn’t so sure, and she’s in charge, so Adam manages to escape with his un-life. Again unsurprisingly, no one cares about Adam’s opinion in any of this discussion, so he wisely decides to just stay away from all of them and hides out for a couple of hundred years.

Then the Demons finally find him again. They’re not the best hunters in the world, I guess, so it took them a while. Annoyed, Adam returns to the big city to stop these pesky things chasing him once and for all, and that’s when things get complicated. Demon prince Naberius (aka William Essex, aka Bill Nighy from The World’s End) desperately needs either Frankenstein’s creation or Frankenstein’s journal full of notes, and now he’s found both at once so he really wants to get his grand plan moving already. He even has two pet scientists working on the whole reanimation problem, namely Dr. Terra Wade (Yvonne Strahovski, Killer Elite) and Dr. Carl Avery (Nicholas Bell, Don’t Be Afraid of the Dark). They think Frankenstein’s a myth and demons aren’t real. They’re in for the nastiest shock since Adam’s heart got restarted.

I tried to figure out which big city it was supposed to be, but I had to give up. It looks European, with a giant cathedral in the middle of everything, so it might be London, but there was a police officer on screen for about ten seconds who seemed to be wearing a more New York sort of uniform and who definitely sounded like he was from the States, so it also might not be London. The actors mostly sound British, though several are actually Australian, as usual. On the other hand, when you’re dealing with demons, people turning into gargoyles, and reanimating the dead, what’s a made-up city or two? Terra’s specialty, electrophysiology, is a real thing, but aside from that it’s all weird science at best, so the trick is to just accept it and enjoy.

Because while I realize that people are saying bad things about it and it isn’t making much money, I actually liked it. Maybe it’s a geek thing, I don’t know. The voiceovers were a little melodramatic, the fight scenes were occasionally downright confusing, and it was edited down as far as they could possibly go, so it was sometimes a little hard to follow the finer details of the plot. And yet I had fun watching it, which is all I’m really concerned about. So give it a try. I’m giving it a solid three and a half out of five, no matter what anyone else says. Like Adam, I dare to be different. Just not quite that different.